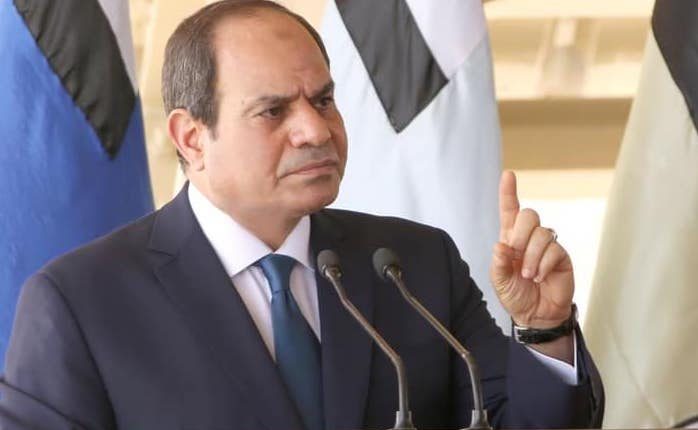 Egypt’s President Abdel Fattah Al-Sisi said, on Saturday, that any direct interference from Egypt in Libya has international legitimacy.

This could be as part of the UN Charter and under the right to self-defence, or based on the only legitimately elected authority of the Libyan people, which is the Libyan Parliament.

In a speech during his inspection of the Western Military Zone, Al-Sisi said such interference aims to protect and safeguard Egypt’s western borders from threats posed by terrorist militias and mercenaries.

Al-Sisi added that Egyptian interference aims to support the Libyan people, put an end to the bloodshed, and support an immediate ceasefire. It also aims to support Libya’s stability and security, as it also forms a part of Egyptian and Arab security.

“All foreign forces and their mercenaries have to immediately leave Libya, and all militias have to be disbanded,” Al-Sisi said.

Al-Sisi said if Egyptian forces advanced to Libya, they will advance under the supervision of Libyan tribes, and they will leave peacefully when the crisis comes to an end.

“Egypt has been always keen to rely on peaceful paths and respect international laws, but this does not mean negotiating with terrorists and mercenaries who are brought to threaten regional and international stability,” Al-Sisi continued.

The President said that Egypt seeks to end illegal foreign interference in Libya, adding that the country is confronting dangers and threats on its borders.

These threats come from the aggression of militias that have been backed by countries which have ambitions “at the expense of our national security”.

Meanwhile, Al-Sisi called on the international community to break its silence over foreign interference in Libya.

He said that Egypt is not invading any country’s sovereignty, but that the situation has now changed, referring to the dangers that face Arab security.

“We do not have any interests but your safety and security,” Al-Sisi said, addressing a delegation of Libyan tribal leaders and elders witnessing the inspection tour.

He stressed that “Egypt considers militia advances towards Sirte and Jufra as a ‘red line’ that cannot be crossed.”

Addressing troops and forces in the Western Military Zone, Al-Sisi said that he appreciates their continuing efforts to protect the western borders from threats facing Egypt.

In the years since the Libyan crisis erupted, Al-Sisi added that Egypt has sought to warn of the dangers and threats that have resulted. Egypt is still keen to support efforts for a comprehensive settlement to resolve the Libyan crisis, he noted

Al-Sisi said that the Cairo Declaration was consistent with all international resolutions and initiatives. It is also consistent with UN efforts and the Berlin Conference, which aimed to achieve the will and aspirations of the Libyan people.

During the inspection, a Libyan tribal representative urged Al-Sisi to “protect Libya and maintain its sovereignty and wealth for the benefit of the Libyan people”.

In response, Al-Sisi said, “Bring the young people of the tribes and we will, under your supervision, train and arm them. We only want a stable and safe Libya.”

“If the Libyan people asked us to interfere, then this is a message to the world that Egypt and Libya is one country and have same interests, security, and stability,” Al-Sisi said. “Our patience is to clarify the facts and situation. Anyone who sees this patience as a weakness or hesitation is wrong.”

Since the fall of Libya’s former leader Muammar Qaddafi in 2011, the country has undergone years of conflict. The oil-rich country has been split between two parties since 2014, the Government of National Accord (GNA) based in Tripoli, and the Libyan Arab Armed Forces (LAAF) based in Benghazi.