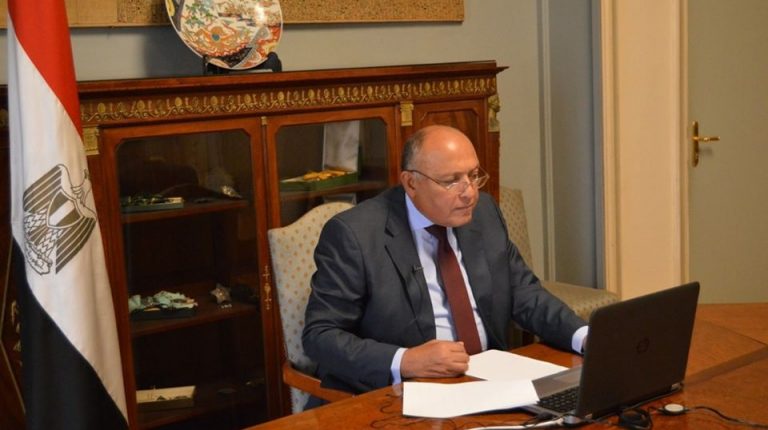 Egypt will not tolerate terrorism and its supporters, and will take any measures to prevent Libya falling under terrorists and militia control, Foreign Minister Sameh Shoukry said on Tuesday.

Shoukry’s comments came during his speech at a virtual meeting of Arab Foreign Ministers at the Arab League, which took place at Egypt’s request to discuss the Libyan crisis.

The minister warned of the consequences of foreign interference that supports terrorist groups and militias, including sending Syrian mercenaries to the war-torn country.

He said that such acts harm Libya’s stability and security, whilst also posing a threat to Arab, regional and international national security. The minister also called for Arab countries to stand together in confronting these actions.

Shoukry emphasised Egypt’s firm stance on the Libyan crisis, adding that the country has become involved in diplomatic efforts that aim to reach a political settlement of the crisis. He added that the last efforts took place via the Egyptian-led Cairo Declaration that was launched on 6 June, and is consistent with the Berlin Conference’s agreements.

The minister said that Egypt supports the political and economic outcomes outlined by the Berlin Conference as well as the second round of the 5+5 Libyan Joint Military Commission talks. He noted that these aim to reach a lasting ceasefire and restore security to civilian areas.

He also called on Arab support for Egypt’s efforts in restarting Grand Ethiopian Renaissance Dam (GERD) negotiations in good faith, until a fair and binding agreement is reached.

At Tuesday’s meeting, Ahmed Aboul Gheit, Secretary-General of Arab League, said that no arrangements for a ceasefire will work without the exit of mercenaries and the disbanding of militias. He added that the Arab League remains adamant in its refusal of any military solutions in Libya.

“We condemn all forms of foreign military interference in Libya,” Aboul Gheit said, “A comprehensive political solution is the only solution to settle Libyan crisis.”

The Arab League also rejects any plans to divide Libya into spheres of influence and create a permanent crack in the fabric of the Libyan society, Aboul Gheit said.

At end of the meeting, Arab Foreign Ministers asserted the commitment to Libya’s unity and sovereignty, and the need to restore its national state without foreign interference. The ministers also affirmed that a political solution is the only way to settle the crisis.

On Monday, French President Emmanuel Macron accused Turkey of “playing a dangerous game” in Libya. He added that France will not tolerate Turkish military intervention in the war-torn country.

Also on Monday, the US Ambassador to Libya, Richard Norland, and Commander of the US’ Africa Command, General Stephen Townsend, met with Government of National Accord (GNA) head Fayez Al-Sarraj in Zuwara, Libya.

Norland said that “external actors should stop fuelling the conflict, respect the UN arms embargo, and uphold commitments made at the Berlin Summit”.

Earlier on Sunday, Egypt requested an urgent meeting on Libya, a day after President Al-Sisi said that any direct Egyptian interference in the country has international legitimacy under the UN Charter and under the right to self-defence.

Al-Sisi stressed that he considers militia advances towards Sirte and Jufra as a ‘red line’ that cannot be crossed, and which could provoke Egyptian interference.

His ministry added in a statement on Tuesday that “claims of Russian military interference in Libya rely on doubtful reports”, adding that Moscow is requesting an investigation into these reports.

Turkey has recently intensified its military support to the GNA. It is already providing drones and air defence systems, weapons and Syrian mercenaries, which have helped the GNA to claim key victories in recent weeks.

Since the fall of Libya’s former leader Muammar Qaddafi in 2011, the country has undergone years of conflict. The oil-rich country has been split between two warring factions since 2014, the GNA based in Tripoli, and the Libyan Arab Armed Forces (LAAF) based in Benghazi.