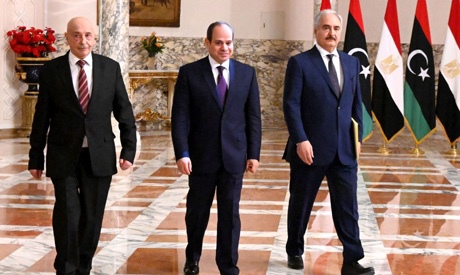 In 2010, a scientific study suggested that the Mediterranean Basin has 192trn cubic feet of natural gas, and 1.7bn barrels of oil.

Other sources say these numbers are only what scanned satellite imagery of the region shows, but that the true numbers are far greater. These Mediterranean caches are like Ali Baba’s treasure of black gold, a treasure everyone wants.

After this discovery, tensions started to emerge between countries in the Mediterranean. notably Egypt, Libya, Israel, Lebanon, and Gaza bordering the Mediterranean in the south, with Turkey, Greece, and Cyprus located in the north.

Everyone wants a piece of the cake. Some of these countries are overwhelmed by internal political conflicts, and are therefore unable to participate in the race for black gold. These include Libya, Gaza, Syria, and Lebanon.

The countries engaged in the race are: Turkey, which imports 90% of its power needs; Greece, which has hit historic economic lows; Israel; and Egypt, which wishes to enter the league of energy exporting countries.

In 2013, Mediterranean countries started forging agreements delineating their maritime borders. An agreement was made between Egypt, Greece, Cyprus, and Israel giving all four stakeholders part of the region’s oil treasure.

Turkey was not included in the agreement for geopolitical reasons. Afterwards, Turkey signed two similar agreements with Libya’s Government of National Accord (GNA), motivated by two main goals. The first is to destroy any competition for the TurkStream gas pipeline, which passes through Turkey and transfers Russian gas to Europe.

By controlling Libya’s maritime border, Turkey will prevent Egypt from launching a gas pipeline to Europe through Italy, which will compete with TurkStream.

The other reason is to deploy troops in Libya to secure their allies who are deeply associated with the Muslim Brotherhood, and willing to house ISIS.

There are two main warring factions in Libya: the Tripoli-based GNA, headed by Fayez Al-Sarraj, which is also supported by Ankara; and the Libyan Arab Armed Forces (LAAF) commanded by General Khalifa Haftar and supported by Cairo, Rome, and Paris.

The situation in Libya has become complicated, following Turkey’s deployment of troops to protect Al-Sarraj’s government. That move has put Egypt’s national security at risk, endangering its western border. This is not only due to Turkish troops now being stationed at the western border, but also due to the relocation of ISIS from Syria to Libya after Turkey’s intervention in Syria earlier this year.

There are two expected scenarios in Libya, and both require Egypt’s swift and firm intervention to protect its own national security and natural gas supplies in the Mediterranean.

The first is imposing a ceasefire in Libya and removing all foreign forces from the country, while forming a new government that has the support of all Libyan tribes and provinces.

Egypt, alongside the LAAF, proposed the Cairo Declaration, hoping that a ceasefire will occur. Several countries have leant their support to the Cairo Declaration, including the US and Russia. The GNA in Tripoli has not commented on the initiative or said whether it will abide by the proposed ceasefire, hoping they can beat the LAAF thanks to the continuous Turkish support.

The second scenario is an Egyptian military intervention in Libya to support the LAAF against the GNA and Turkey. Egypt and Turkey are highly militarised nations. According to Global Fire Power, Egypt is slightly stronger than Turkey, with the former having a stronger air and naval forces.

Egypt must act to balance the scale of power in Libya, in order to secure the former’s western boarder and make better use of its gas findings, either by political influence or by military intervention.

On 20 June, President Al-Sisi said that any direct Egyptian intervention in Libya would have international legitimacy at this point. The president made the statement in a televised speech while inspecting Egypt’s Western Military Zone, accompanied by the heads and elders of Libyan tribes.

The tribal elders hereby asked for Egyptian intervention in favour of the LAAF. President Al-Sisi continued that the Egyptian Armed Forces are the strongest in Africa and the ninth strongest worldwide, nonetheless the Egyptian army is peacekeeping power that doesn’t act except if necessary. He stressed that any Egyptian military intervention in Libya will be led by the internal tribes.

Al-Sisi said that the cities of Jufrah and Sirte are a red line, and that any advance from the Turkish-aided GNA towards these cities will force Egyptian intervention. Hopefully it will not come to war, but the Turkish government must understand that the age of the Ottoman Empire is over and will never return, and their interference is not acceptable.