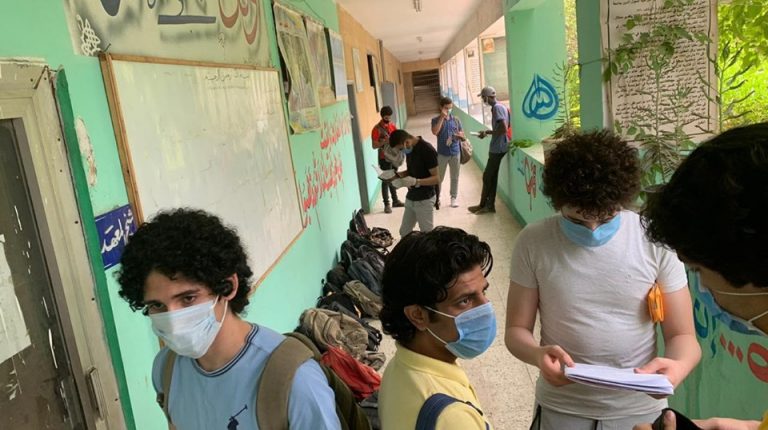 Over 650,000 students across Egypt started their school leaving exams (Thanaweyya Amma) on Sunday, amid heightened precautionary measures to curb the spread of the novel coronavirus (COVID-19). However, reports and photographs of overcrowding were circulated on social media, showing large gatherings of parents and students in front of schools.

Minister of Education Tarek Shawky pledged to solve the issues that were seen on the first day of the Thanaweyya Amma exams, by implementing new procedures starting from the second day of exams on Thursday.

According to a press statement on Sunday, Shawky noted that the Ministry of Education had observed violations at a total of 20 schools out of the 2,216 where exams were taking place.

Shawky criticised the students for gathering together, and described their behaviour as lacking commitment to social distancing measures before and after the exam. The minister appealed to parents to set a good example to students.

However, some students told Daily News Egypt that there was a lack of organisation and commitment to precautionary measures at the exam venues from the school managements themselves. Some voiced concerns about the overcrowding in front of schools, with little done by exam officials to discourage this or control the crowds.

Students also agreed that they were forced to wait outside for over an hour before the start of their exam, which commenced later than the announced timing.

The student, who is undertaking her exams at the Red Crescent school in Cairo’s Maadi district, also said that she arrived early to the exam as requested. However, she and her colleagues ended up waiting for a long period of time in the school’s playground before they were allowed in to the exam.

“Thank God, the playground was not so crowded, but outside it was very much so, and parents were fighting to enter the school,” the student said.

She added that there were no social distancing precautions in place among students going into the exam classrooms, with no organised lines of students as they entered.

“We were only 14 students in the class, where we had to sanitise our own desks, but not all the teachers were wearing face masks and gloves,” the student said. “The thing that really annoys me is the overcrowding, it really needs some organisation.”

The student did note, however, that the students, who were given face masks and had their temperatures tested as they were going in, entered the schools through sterilisation gates.

Another student at a government school in Beni Suef governorate, who also requested to speak on condition of anonymity, said that he entered the school through sterilisation gates. He added that there were ambulances and police cars outside the school.

However, he noted that the distribution of face masks, gloves, and sanitisation products was uneven, as some students received them and others, including himself, did not.

“There were three schools taking exams at the same venue, including mine, but there was no social distance, and when we were having our temperature tested, we all were standing close to each other in a very small place,” he added.

The student also noted that the inspector was not wearing a face mask, and that in the examination classroom he was seated in, invigilators were not strict with those students who removed their face mask.

There were also many parents standing outside the school, with no organisation of these crowds, he also said.

Ahmed Awad, whose sister is sitting her Thanaweyya Amma exams this year in Kafr El-Sheikh, told Daily News Egypt that the organisation of exams was not ideal.

“My sister, who is a student, waited in the sun for more than hour before the exam, which already made the temperatures of most students high,” Awad said. “There were no ambulances, on hand, and only a dentist to handle any situation if there were an emergency, and he was covering three schools, despite him not being the best candidate for the role.”

He added that they were surprised that the students came out from exam classrooms about two hours later than scheduled, noting that’s why parents gathered outside the school.

The families expected that the ministry will designate waiting areas for them outside schools, Awad said.

The situation was rather different at schools affiliated with Al-Azhar, with no complaints filed and students noting that the conditions were fine.

Hassan Mohamed, a student at an Al- Azhar high school, said that there was no crowdedness in front of their exam committees. They underwent temperature tests, and were given face masks and gloves.

“We entered in organised lines to the examination classrooms, with social distancing measures were in place. There were only eight students inside each classroom,” the student said. “We also went through sterilisation gates on the way in.”

Mohamed noted that although there were no families or any large gatherings allowed outside the school, there was also no police presence or ambulance outside too.

Abeer Safwat, an exam invigilator in Fayoum governorate, told Daily News Egypt, “We were given gloves, and sanitizers, and everything was organised by the ministry [of Education], which provided everything. However, face masks were not distributed to all teachers as there were only a limited number of these, but there were face masks given to other schools in the area.”

Despite the short supply of some items, she added, “There was a medical worker visiting the examination classrooms, and an ambulance outside. In our school, we also have an isolation room for any student who is suspected of having the coronavirus.”

Students were also given plastics bags to wear on their feet, she noted, adding that in some schools the Ministry of Education has given face shields to teachers.

No exams to be postponed

Many parents, as well as the Egyptian Medical Syndicate, have called for the Thanaweyya Amma exams to be postponed over concerns about student safety. The calls come amid a surge in coronavirus cases across Egypt over recent weeks. Others called for replacing the exams with an online research project, which has been adopted for other school grades.

Education Minister Tarek Shawky has repeatedly said that major exams, which have already been delayed for two weeks amid precautions, cannot be postponed further. He noted that the authorities are taking all the necessary precautions as students sit their exams.

According to local media, several confirmed or suspected coronavirus cases have been detected among high-school students on the first day of exams. Several students had exams in designated isolation rooms at schools, while others were transferred to isolation hospitals after showing symptoms, including high temperatures.

Egypt suspended school and university classes in mid-March as part of sweeping anti-coronavirus measures. The government introduced a new online research paper system as an alternative to the final exams of most other school grades, to reduce overcrowding and ensure students’ health and safety.