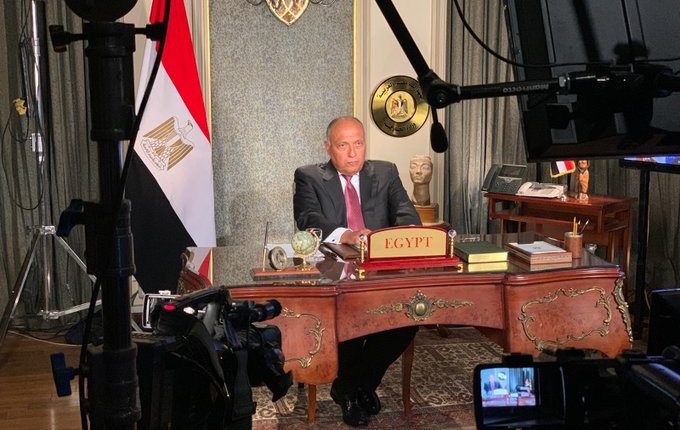 In another chapter of political attempts to settle the regional dispute over the Grand Ethiopian Renaissance Dam (GERD), the United Nations Security Council (UNSC) convened on Monday for a special discussion on the decade-long issue.

The meeting, held virtually through videoconference, brought together representatives of the GERD concerned parties, Egypt, Sudan, and Ethiopia. Representatives of the US and Germany and other member countries at the Security Council, were also present in the meeting. They all called upon the three countries to reach consensus in the soonest possible time. The US warned against making statements or moves that may undermine the talks.

Egypt’s Ministry of Foreign Affairs Sameh Shoukry spoke reasonably in front of the world detailing the outstanding issues regarding the Ethiopian dam.

“The issue of the Renaissance Dam is extremely important to the Egyptian people, and requires the same cooperation that the countries of the world offer in confronting the coronavirus pandemic,” he said. “The GERD that Ethiopia had constructed across the Blue Nile is a threat to the single source of livelihood that could endanger the security and survival of an entire nation.”

Shoukry stressed that Egypt recognises the developmental objectives of the Ethiopian dam, but it is also necessary for other parties to recognise that this project would threaten the welfare, wellbeing, and the existence of millions of Egyptians and Sudanese.

“Therefore the unilateral filling of this dam without an agreement that includes the necessary precautions to protect the downstream communities will reflect high significant harm and provoke crises and conflicts that threaten stability in an already troubled region,” the Egyptian minister warned.

Accordingly, shoukry suggested that it important that the UNSC consider this matter as body trusted by the international community with unique responsibility to maintain peace and security.

The UNSC meeting follows a series of high-level meetings and consultations between Egypt and the council’s member states that aimed to clarify Egypt’s position on the issue.

Shoukry also said that it is expected that the UNSC will exercise its functions with vigilance to avoid escalating tensions, prevent the outbreak of conflicts, and contain crises that threaten to undermine peace in a region that suffers from fragility.

Egypt has also emphasised that no “unilateral measures” should be taken that might affect the chances of reaching an agreement, and may constitute a threat to international peace and security.

“We are confident that the Security Council, in carrying out its duties and fulfilling its responsibilities, will give all due care and work actively to address any situation in which unilateral measures are taken that could undermine the principles on which the international system is founded and which are enshrined in the Charter of this organization,” said Shoukry.

He continued, “As a responsible country, Egypt has decided to submit the matter to the Security Council to avoid further escalation and to ensure that unilateral measures do not undermine the chances of reaching an agreement on the Renaissance Dam, or prejudice the rights and interests of the downstream country, or, more seriously, endanger the lives of more than 150 million citizens; Egyptian and Sudanese danger.”

“We in Egypt populate the most arid of the Nile states, and water scarce countries. However, we are fully committed to support our African brethren especially in the Nile basin including Ethiopia,” Shoukry noted.

“Egypt is in the most arid regions of the Nile Basin, and our country is the most water scarce on Earth, this harsh reality confines us to no more than 7% of our lands, and to a narrow green strip and fertile delta where millions reside, where the average per capita water is about 560 cubic meters annually, which places Egypt on the list of countries that suffer from water scarcity according to international standards,” Shoukry also said.

He also added that on the other hand, Ethiopia has been granted an abundant water resources that include average rains of 936 billion cubic meters annually of water, in addition to 11 other river basins, some of which are shared with neighboring countries, and are the resources that provide endless opportunities for cooperation and integration Regional.

Shoukry noted that previous information indicated that if the GERD is filled and operated unilaterally, this may exacerbate the difficult hydrological reality and put millions in Egypt and Sudan at risk.

While he also said that At the same time, Egypt is committed to work tirelessly to support the efforts of our brothers in African countries, especially the Nile Basin countries, including Ethiopia, to achieve prosperity

“This is confirmed by the long history of constructive cooperation between Egypt and those countries in implementing many development projects; Including building dams, rain-harvesting projects, drilling wells and removing weeds that hinder the flow of the river,” he noted, adding that these efforts reflects Egypt’s steadfast belief in our common destiny as Africans, and confirms conviction that the Nile is not a monopoly of Egypt or pure ownership of any other riparian state for this river, but rather a common heritage.

Moreover, Shoukry said that Egypt addressed the Security Council on May 1 and June 19, 2020 regarding the stages of negotiations on the GERD. During the session, the minister also presented main stations and features of these arduous negotiations that Egypt participated in “in good faith and showed sincere political will to reach a just and balanced agreement that preserves the rights of the three countries that share the Blue Nile”.

“Since Ethiopia began unilaterally to build the Renaissance Dam, negotiations have witnessed numerous tripartite meetings and bilateral summits between leaders of the three countries. 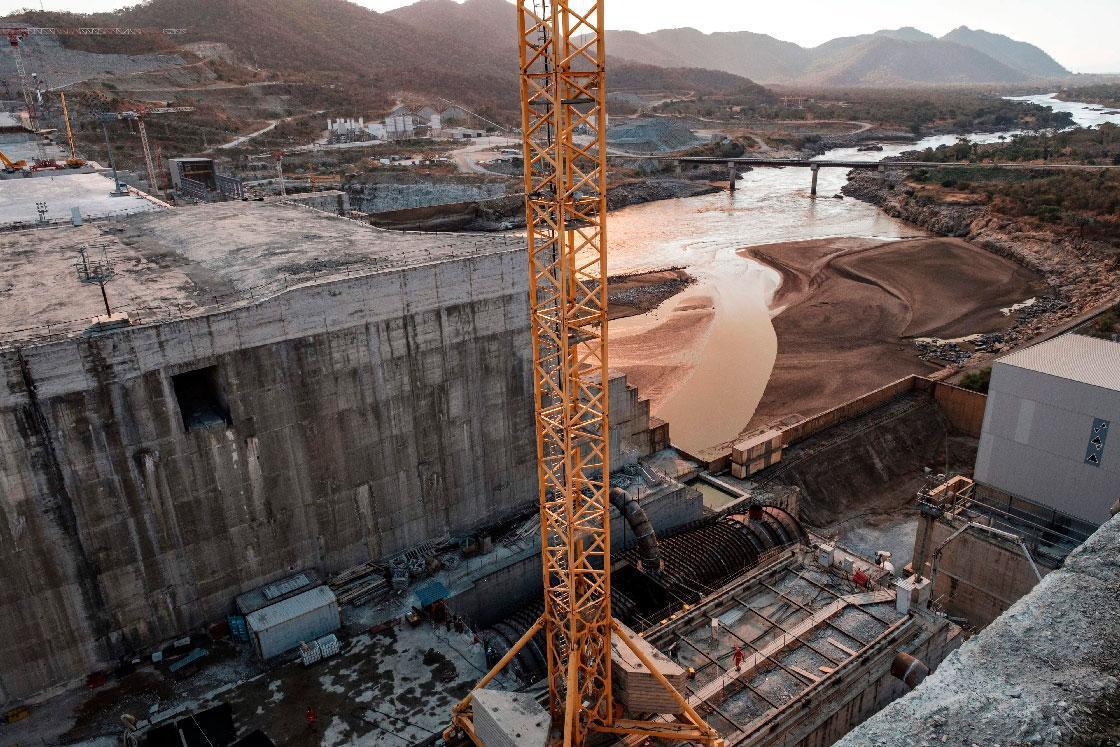 We have held and participated in several bilateral and multilateral summits and meetings with our African brothers to facilitate an agreement that secures Ethiopia to generate electricity efficiently and sustainably while reducing the negative effects of this dam, and preventing damage from occurring on downstream states.

Shoukry stresses Egypt’s rejection to all the Ethiopian accusations, describing it as complication the situation, saying that “It is also unfortunate that, throughout the path of these negotiations, Egypt was subjected to an unjustified campaign of allegations that it seeks to compel other parties to accept agreements and understandings dating back to a bygone colonial era, but the fact of the matter is that Ethiopia has not concluded any agreements and is subject to colonialism.

“Originally, all the agreements related to the Nile are signed by Ethiopia as an independent state, including the agreement that the Emperor of Abyssinia concluded with free will with Britain in 1902, which prevents Ethiopia from building facilities that affect the flow of water in the course of the Blue Nile, and also the framework agreement for cooperation signed by the President The late Ethiopian ministers, Meles Zenawi, with Egypt’s president in 1993, which obliged him not to cause any significant harm to Egyptian water interests, as well as the Declaration of Principles Agreement for the year 2015. All of them are valid and binding agreements that all parties must respect and implement,” Shouky said, clarifying all allegations circulated by the Ethiopian side.

Shoukry further added that “such dangers looming ahead of us pose a serious threat to international peace and security, as well as serious and even earth-shattering political implications, as the two countries will put the estuary in an unsustainable situation and a climate of hostility will be generated between our countries, and the seeds of rivalry will be sown between our peoples.”

Shoukry called the Security Council and the international community to make every effort and support any initiative that might contribute to removing this imminent danger and raising this looming threat.

Although our position remains that the effective solution to the question of the Renaissance Dam is to reach a fair and balanced agreement, Egypt will preserve and secure the higher interests of the Egyptian people – the defense of survival is not pure choice, but it is an imperative issue imposed by the nature of human beings, the Egyptian minister said.

He also added “we appealed to the Security Council to urge the parties to negotiate in good faith to reach an agreement on the Renaissance Dam, and to refrain from any unilateral measures until the conclusion of this agreement … and until we reach this goal, the matter must remain under consideration by the Council in carrying out its duties.”

“Ethiopian should consider any potential negative impacts on other riparian countries,” Sudanese representative in the UNSC said during the session.

He added that Sudan believes that reaching an agreement on the filling and operation of the GERD is extremely necessary before any unilateral move in this regard.

He also said Khartoum’s document could provide a ground for agreement between Sudan, Egypt and Ethiopia and that Sudan calls for the parties to refrain from taking any action that may jeopardise the efforts of the African Union to end the conflict.

Meanwhile, the Ethiopian representative said, “This council [UNSC] should not be the right place to discuss the diplomatic issue [between the three countries].”

He claimed that Egypt acquires the lion’s share of the Nile waters and relied on colonial agreements. He also claimed that his country showed flexibility during the negotiations and has extended the filling period from 4 to 7 weeks.

More than 60% of Ethiopia’s lands are deserts, while Egypt is a coastal country and has other sources for water, he said. He added that Ethiopia wants justice through an agreement which does not seize its right in using the waters of the Blue Nile.

Survival is not a question of choice: FM Sameh Shoukry addressing UNSC on GERD