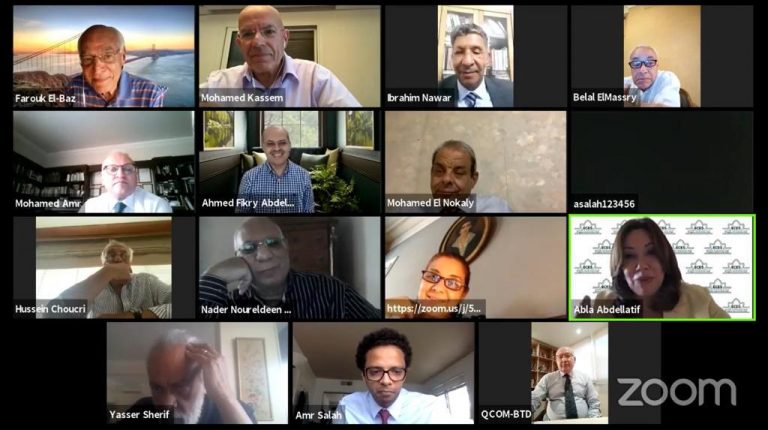 The Egyptian Center for Economic Studies (ECES) held discussions, on Wednesday, on the technical, economic, legal and political steps that Egypt must follow in Grand Ethiopian Renaissance Dam (GERD) negotiations.

During an online seminar, entitled “The GERD Predicament”, ECES Secretary-General Mohamed Qassem said that Egypt is facing water poverty, which underlines the importance of the country’s securing its water resources.

He said the symposium aims to provide information on the role of international agreements regarding River Nile waters, and the Declaration of Principles, signed by Egypt, Sudan and Ethiopia in 2015. The symposium also looks to explain whether the recent African Union intervention will benefit or harm Egypt’s rights in the matter.

Ambassador Ezzat Saad, Director of the Egyptian Council for Foreign Affairs, said that Ethiopia’s strategy is to fully control River Nile waters. Egypt, however, has invested a lot in building trade and economic relations with Ethiopia between 200 and 2010, to support trust between the two countries. GERD negotiations have since stalled, due to Ethiopian intransigence.

The ambassador explained that the US-supported negotiations have reached a draft-integrated agreement that meets 80% of Egypt’s demands, though Ethiopia did not attend the last meeting.

Saad pointed out that the 2015 Declaration of Principles agreement did not include a legal mechanism for settling disputes.

Without signing a binding declaration, Egypt submitted a letter to the UN Security Council outlining developments in GERD negotiations that have lasted 10 years. Egypt called for the need to persuade Ethiopia to refrain from taking any unilateral measures, so as not to harm the other parties, Saad added.

Mohamed Sameh Amr, Head of the Public International Law Department at Cairo University’s Faculty of Law, said there are several international agreements relating to River Nile waters, in which Ethiopia has not participated.

However, a binding agreement was signed in 1902 by the then-Ethiopian Emperor, and any claims about signing it in the colonial era have no basis for validity.

He said that the 1902 agreement states that Ethiopia may not establish projects on the River Nile without Egypt’s approval. None of the previously signed agreements, however, provide a mechanism for settling disputes, which is the main reason for Egypt’s stance on the matter in current negotiations.

Amr stressed that Ethiopia, which has promoted its sovereignty over the Blue Nile, does not want to reach an agreement and has no desire to do so, considering the GERD project was built on Ethiopian land using Ethiopian money.

He added that the Washington negotiations had the primary goal of including an international presence, including by the World Bank and the US, in negotiations. This comes following Ethiopia’s not attending the last session, due to its “not wanting to reach an agreement”.

Amr explained the most important points in the disagreement cover the dam’s filling and operation, taking into consideration periods of drought. He noted that Ethiopia does not differentiate between natural and artificial droughts, and that there will be a reduction in the volume of water reaching Egypt should further dams be built behind the Renaissance Dam.

Dr Nader Nour El-Din, Professor of Lands and Water at Cairo University’s Faculty of Agriculture, explained that Egypt is trying to bridge the water gap by re-exploiting 20 billion m³ of agricultural and industrial sewage water. He asserted that Egypt is the only country that re-exploits waste water from Nile Basin countries.

Egypt still suffers from an annual water shortage of 22 billion m³, which has led the country to import 62% of its food due to there not being enough water for agriculture, he said.

Survival is not a question of choice, unilateral GERD filling would heighten regional tensions: Shoukry to UNSC