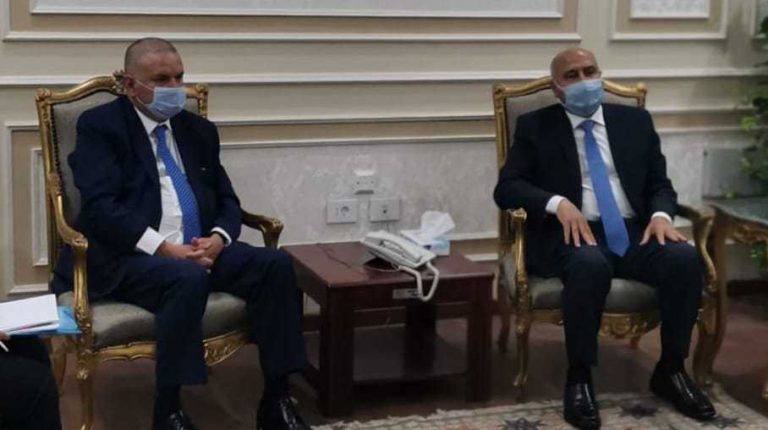 Minister of Public Enterprise Sector Hisham Tawfik and Minister of Transportation Kamel Elwazir have met to discuss the latest developments in the establishment of a multimodal transport company in Egypt.

During the discussions, the ministers reviewed the introduction of a common rail transportation system which will take place as a partnership between the two ministries, and which will use both road and rail transport methods.

Tawfik explained that combining truck and rail services for transporting goods carried out by companies affiliated with his ministry will provide fast, efficient, and low cost integrated customer service. This step is particularly important given that the two forms of transportation compliment each other.

The step would also double the volume of transportation that could be provided by the joint company, which will be established by the two ministries.

Tawfik stressed the feasibility study’s importance in including the absorptive capacity of Egypt’s railway services in terms of the volume of work that can be provided, particularly given the current conditions of rail infrastructure.

Elwazir highlighted the great importance his ministry places on increasing the volume of goods transported via railways. This will reduce the burdens on Egypt’s road system, and increase the Egyptian Railway Authority’s resources.

The minister said that there are many advantages in using multi-modal forms of transportation, including the integration of more than one means of moving goods around. This will have the advantages of increased optimisation in transport methods, increased cost-effectiveness, as well as improved speed and safety. It is anticipated that the revised methods of transporting goods in Egypt will positively impact on the national economy.

At the end of the meeting, Elwazir requested the participation of specialists from both ministries in meetings with German consultant, Dornier.

The German company is currently studying the conversion of the Egyptian Railways Authority’s current freight transport sector into a commercial independent company.