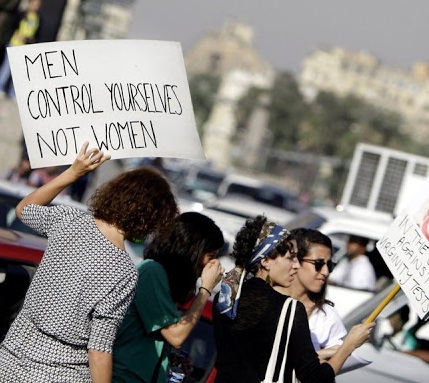 Egypt’s public prosecution is now carrying out an investigation into social media allegations accusing a young Egyptian man of sexual assault and rape of dozens of young women.

Earlier, the prosecution said it had received one complaint against the alleged assailant submitted by an unknown girl. It added that the girl filed her report online, accusing the defendant of threatening her to “practice vice with her” in November 2016.

The prosecution said it will take the required legal procedures, but it has not yet received any formal reports from other victims.

The prosecution noted that it is looking into the allegations of sexual violence by the defendant. The allegations have gone viral since they first emerged on social media over the last few days, with more young women finding the courage to speak out.

Meanwhile, the National Council for Women (NCW) filed a report with the Public Prosecutor to investigate the online testimonies against the defendant regarding sexual harassment and rape.

The NCW urged victims to reach out to them to share their accounts and file official reports with the prosecution against the defendant.

In televised remarks on Saturday to Al-Hekaya TV show, NCW Chairperson Maya Morsi said that two of the victims are ready to file reports against the defendant.

Earlier on Friday, Morsi said that she has personally reached out to one of the victims and found that she, as with other victims, is afraid of filing reports.

Also on Friday, the NCW released a statement in which it said it has received many calls and complaints from other harassment victims. The council said those women reported that the alleged assailant “threatened them with blackmail by using photos and videos that document his crimes, as a way of defaming them if they report his acts or tell their families.”

The NWC said that, for the victims to cooperate with the police and public prosecution, they required that their identities remain hidden and their personal lives are protected.

Amal Abdel Moneim, Director of the NCW’s Complaints Office, also told the Al-Hekaya TV show that about 10 young women have so far shared their accounts with the council.

“We will support those girls, and provide them with the required legal support,” Abdel Moneim said.

The case has now found its way to Egypt’s parliament, with MP Anissa Hassouna calling for an urgent investigation into the testimonies of sexual violence by many young women.

“Many women and men prefer to blame the victims, instead of prosecuting assailants,” Hassouna said. She urged sexual violence survivors to seek justice for themselves and protect other women from the defendant. Over the past few days, a group of young women created an account, entitled @assaultpolice, on social networking site, Instagram. They have so far shared testimonies for over 50 incidents of sexual harassment, rape, and sexual assault over the space of five years, all accusing Ahmed Bassam Zaki as the perpetrator.

The testimonies include accounts of survivors who said they were subject to those incidents when they were children. The survivors also shared voice notes and texts which they said Zaki had sent them.

The shocking accounts rapidly went viral on social media, with a hashtag carrying the defendant’s name now trending in Egypt.

“Policies of zero tolerance for sexual harassment should be put in place and make women feel safe in the places where they live, work, and have fun,” the United Nations (UN) in Egypt tweeted on Saturday.

When one survivor said that Zaki was a student at the American University in Cairo (AUC), the university released a statement on Thursday saying that the defendant has not been a student with them since 2018. The AUC stressed that it has a policy of zero tolerance for sexual violence.

The EU Business School in Barcelona, with whom the defendant was currently studying online, reportedly expelled him after they received knowledge of the allegations.

“Social media contributed to the spread of the survivors’ accounts, that include 50 or maybe 100 young women and minors,” said Intsar El-Saeed, a women rights lawyer and head of the Cairo Center for Development and Law.

“They have to file official reports with the public prosecution to seek justice for themselves and punishment for the [alleged] rapist,” she added.

El-Saeed added, “I hope that the families of the victims will support their daughters and listen to them, if they did so, the girls would not hide what they experienced of sexual violence.”

As things stand so far, only one complaint has been filed with the prosecution against Zaki, relating to an incident that occurred four years ago. There are also the testimonies of other victims who all accused Zaki as the assailant.

El-Saeed said that official reports relating to recent incidents would support the investigation further, as in rape cases, the more time that has passed means the more difficult it is to prove the incident.

“Reassuring survivors is significant, as if they know that the law will serve justice for sexual violence survivors, it will encourage the rest of the survivors to speak up,” El-Saeed said.

Most Egyptian women have reported experiencing sexual harassment in streets, on public transportation, and in the workplace. A 2013 UN study showed that 99.3% of women in Egypt surveyed have been subject to sexual harassment.

Violence against Egyptian women has gradually become recognised as a significant social and legal problem, as women’s rights activists and lawyers call for more stringent laws on the subject.

El-Saeed emphasised the need for legislation that protects women from various forms of violence.

“We only have various provisions in the Penal Code that punish violence against women,” El-Saeed said, “But the existing punishments are not commensurate with crimes.”

El-Saeed said the Cairo Center for Development and Law, among seven other women rights organisations, have worked on a draft unified bill that criminalises and eliminates all forms of violence against women.

The draft law includes rephrasing of some definitions of crimes and violence against women whilst also dedicating a section to domestic violence crimes.

Sexual harassment has already been criminalised under Egyptian law, as harassers can face between six months and five years in prison, in addition to a fine of up to EGP 50,000.

Article No 268 of Egypt’s Penal Code notes that “whoever indecently assaults a person by force or threat, or attempts such an assault, shall be punished with hard labour for three to seven years.”

Article 267 of the Penal Code also states that there is “a penalty of short-term hard labour for cases of sexual assault on women. It will be increased to life imprisonment with hard labour in cases where the assailant is an ascendant or guardian of the victim or her supervisor or is working in her home.”

Many social media users in Egypt linked between the recent accounts shared on social media against Zaki with the #MeToo movement, that helped survivors of sexual violence seek justice.

The viral #metoo hashtag has become a worldwide phenomenon that empowered women, giving them the voice to break their silence on sexual violence, despite attempts to question their testimonies. All too often, victims of sexual violence are also blamed for what happens to them.

“The metoo movement not only empowered women, but also contributed to amending laws across the world and sought justice for survivors,” El-Saeed said.

El-Saeed gave the example of the movement’s impact, referring to the landmark international treaty against violence and harassment in workplaces adopted by the International Labour Organization (ILO) on 21 June 2019