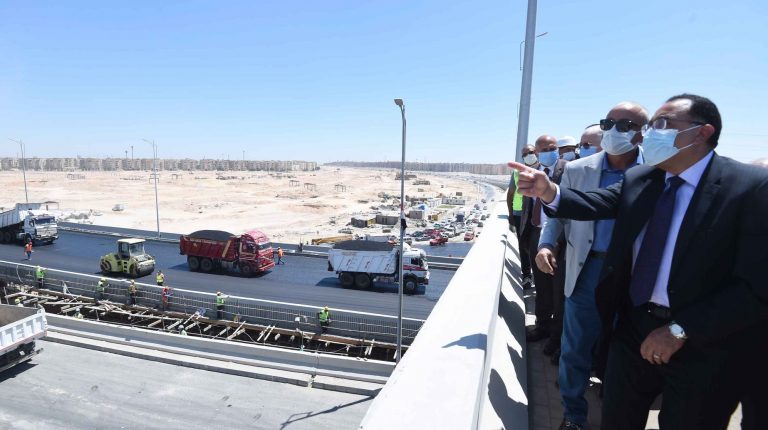 Egypt’s government is implementing road axes in Giza and 6th of October city at a cost exceeding EGP10bn, according to Prime Minister Mostafa Madbouly.

Madbouly’s comments came on Monday during an inspection tour to a number of new projects and axes, including the Middle Ring Road which is due to be finished this year.

The prime minister went on to inspect the El Zomor Canal Axis in Giza, and a project constructing 2,500 housing units in October Gardens City, designated for informal housing residents in Giza.

Madbouly noted that the government “needs hundreds of billions [of Egyptian pounds] to fix the effects of informal housing settlements Egypt has witnessed over 40 years.”

He added that residential buildings constructed around the new road systems in the Al-Zomor Canal areas that should not have exceeded six floors, are turning into towers of 14 or 15 floors. He added that other examples of this flagrance of building regulations can be observed across the country.

Meanwhile, the prime minister said that urban construction will not be permitted in neighbourhoods that have already reached their full capacity.

Madbouly said the government has instructed governors to halt building permits in four governorates for a period of six months. The decision covers housing buildings, but excludes service buildings such as hospitals or schools.

He added that within three months, a detailed outline will be prepared of all densely populated neighbourhoods in old cities and governorate capitals across Egypt.

The prime minister also ordered for the speedy implementation and upgrade of roads and axes in 6th October city to serve its citizens and facilitate their movement. These projects will connect Greater Cairo with other governorates, as well as facilitating the movements of goods.

In May, Minister of Local Development Mahmoud Shaarawy had issued a directive to halt the issue of building permits in major cities across Cairo, Giza, Qaliubiya, and Alexandria governorates for six months. Excluded from the directive are industrial, tourism, government installation and national project licences, which will continue to be issued.

Tougher penalties needed to put brakes on youngsters behind the wheel