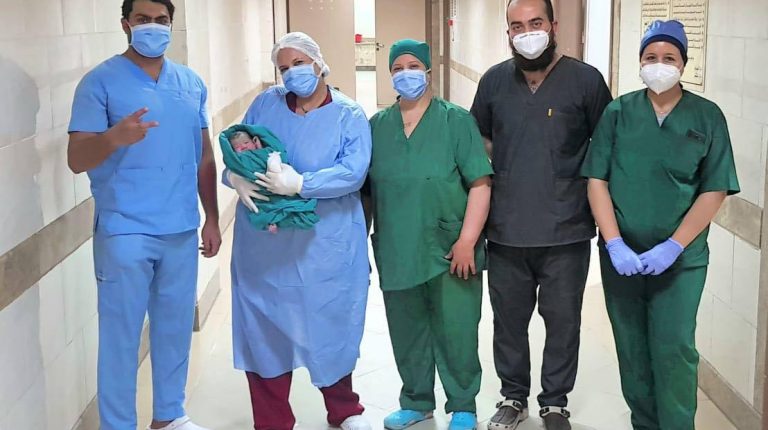 The Agouza Hospital conducted Egypt’s ninth case of a caesarean section (C-Section) delivery for a novel coronavirus (COVID-19) patient, the Ministry of Health announced on Monday.

The ministry said that both the mother and her newborn are in a stable condition.

On Sunday, the Mit Ghamr Hospital also carried out C-Section for another mother who was also infected with the coronavirus.

The 26-year-old patient, from Daqahleya governorate, was in her 38th week when she went to the maternity hospital, where she get tested for coronavirus. It was confirmed that she had the virus, and the young mother was admitted to the hospital’s isolation department.

The baby girl is currently in the hospital’s nursery unit for continued monitoring, and the mother is in the care of the isolation department. Both are reportedly in stable condition.

Meanwhile, the Ministry of Health, on Monday, reported 969 new coronavirus cases, raising the country’s total number of infections to 76,222. The number of fatalities has also increased by 79 to reach 3,422 in total. A total of 21,238 cases have recovered and been discharged from hospitals after receiving the required medical treatment.

Earlier on Monday, the Mansoura University Children’s Hospital announced the death of Mohamed El-Mougy, an analytical technician, after he contracted the coronavirus. The hospital mourned its staff member’s passing on its official page.

Beheira Governor Major General Hisham Amn announced that 75 coronavirus cases have made a complete recovery at isolation hospitals across the governorate. Beheira’s latest figures bring the total recoveries from the virus in the governorate to 2,096.

Walid Mokhtar, Director at Alexandria’s Central Agami Hospital, announced that three cases of the virus recovered and were discharged on Monday. This brings the total number of cases at the hospital to 314 since it was converted to an isolation hospital in March.