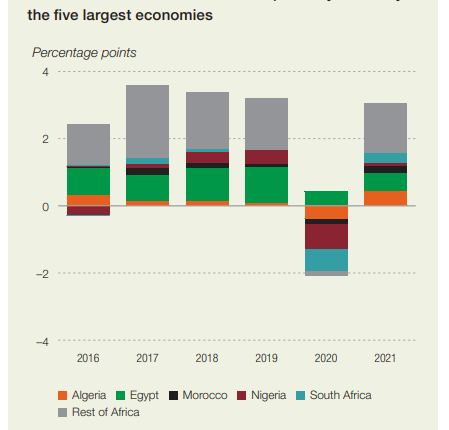 Under a baseline scenario of the novel coronavirus (COVID-19) pandemic limited to the first half (H1) of 2020, the report added that Egypt will see a slight rebound to 2.7% in 2021.

The report said, “If the pandemic were to last until December 2020 (worst case), Egypt’s economy would grow by a modest 0.8%, the only positive growth rate in North Africa.”

It highlighted that consumption, which accounted for an average of 84% of GDP over the last five years, would continue to support economic growth. However, the pandemic is expected to have a dire impact on those below the poverty line, representing 32.5% of the population according to 2018 figures, as well as informal workers, and the vulnerable.

The report also noted that Egypt’s trade deficit, standing at above 12% of GDP in 2019, is structurally high. With tourism receipts and remittances sharply affected, the current account balance is projected to widen to -6.1% of GDP in 2020 as a baseline, down from the -3.6% in 2019. This could potentially widen further, to about -7.1% of GDP in the worst case scenario.

“Tourist receipts and remittances, accounting for a significant share of inflows and GDP, may decline sharply due to the global impacts of the pandemic and the ban on international flights,” the report noted. “Remittances (mainly from Gulf countries), which account for about 8% of GDP, are projected to decline due to a plunge in oil prices and the attendant real effects.”

It added that the rising uncertainty worldwide has also triggered capital flight and could hamper foreign direct investment (FDI). In March 2020, Egypt experienced portfolio outflows and a 12% decline in foreign currency reserves.

Despite a 2% primary surplus in fiscal year (FY) 2018/19, the budget deficit stood at 8.1% of GDP given debt refinancing costs. Escalation in pandemic-related expenditures amid lower revenues could elevate the fiscal deficit in 2020 to more than 8.5% of GDP under both scenarios.

In turn, the report added, this could push public debt above the current 85% of GDP. It also pointed out that the 2019 Global Health Security Index ranked Egypt 87 of 195 counties globally. Egypt was ranked seventh out of 54 African countries, and one of the 21 more-prepared countries in Africa.

Egypt ranked well in the prevention and response categories (79 and 63, respectively, out of 195), as well as first on the trade and travel restriction, and 10 on emergency response operations. Egypt also received praise for its laboratory system.

With the exception of Egypt, GDP growth across North Africa is projected to reach -0.8%, down by 5.2 percentage points from the 4.4% growth projection in the pre-coronavirus outlook.