When most people think of the ancient Egyptian burial grounds at the Saqqara necropolis, they are most likely to think of the famous Step Pyramid of Old Kingdom Pharaoh, Djoser.

However, many are less likely to know of the Memphis necropolis nearby, which features pyramids more mesmerising than that of the Step Pyramid. 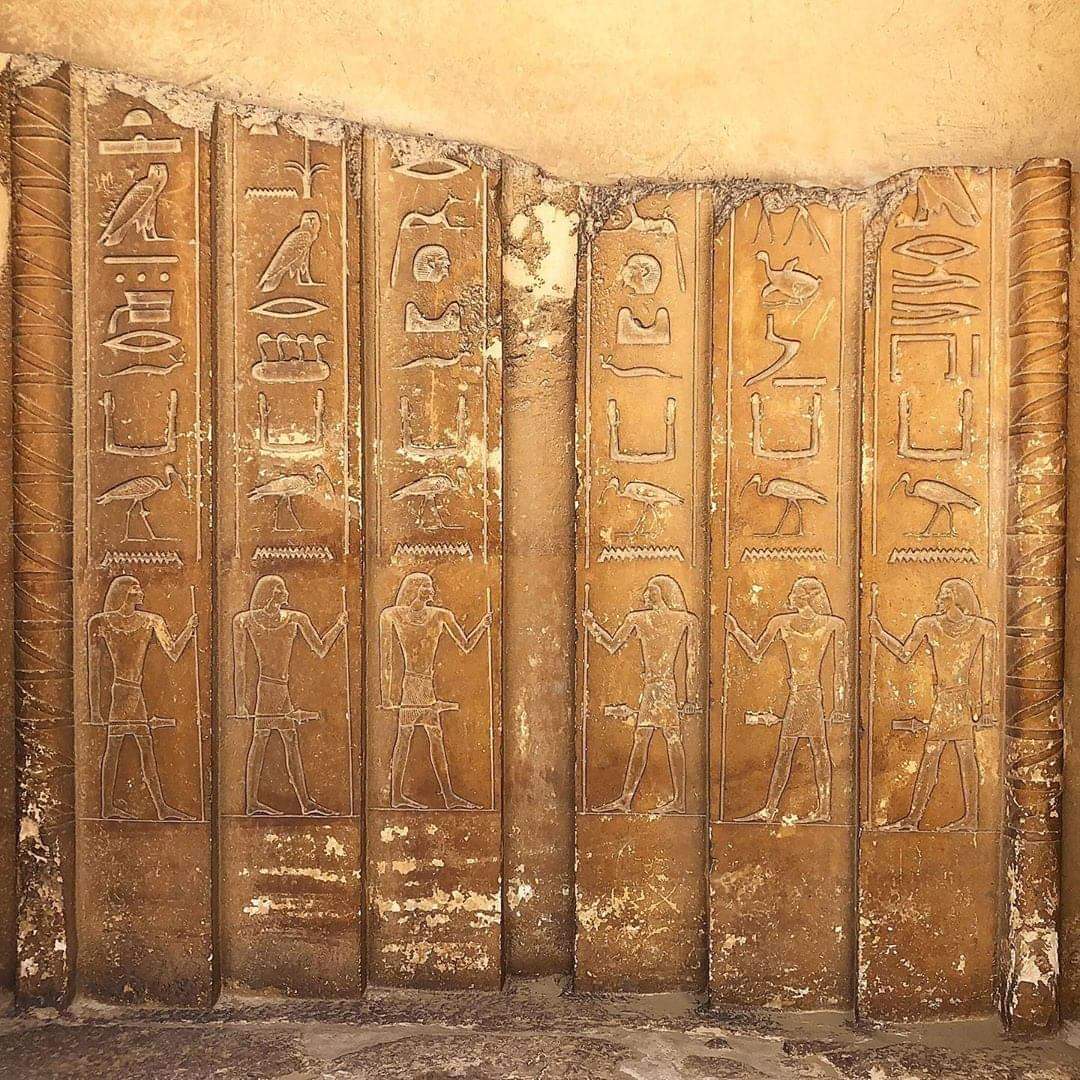 From the outside, the Pyramid of Unas looks like nothing more than a tumbledown, eroded mass, but don’t let that fool you. This pyramid needs to be seen from the inside to truly appreciate its artistic value.

Like most pyramids, visitors need to bend over and almost squat their way down inside, but it is worth that physical effort. It is the bottom-most chamber where the Pyramid Texts, the earliest version of the Book of the Dead, first come into view.

Inscribed onto the walls in these subterranean chambers for the first time in Unas’ pyramid, the tradition of funerary texts, also called Pyramid Texts, spell out what charms and spells for the king’s afterlife.

The smooth-sided pyramid was built in the 24th century BC for the Egyptian Pharaoh Unas, the ninth and last king of the Fifth Dynasty. The Saqqara pyramid’s core masonry consisted of accreted blocks, encased in a fine limestone casing.

This tradition of placing Pyramid Texts inside ancient Egyptian tombs was carried on in the pyramids of subsequent rulers, through to the end of the Old Kingdom, and into the Middle Kingdom. It was these Coffin Texts that formed the basis of the Book of the Dead, which were aimed to help the soul carry on into the afterlife.

By the New Kingdom, the pyramid had already fallen into decay. This is shown through a massive inscription left by Khaemwaset, the famous son of Ramesses II and High-priest of Memphis, in which he referred to his restoration of the monument. 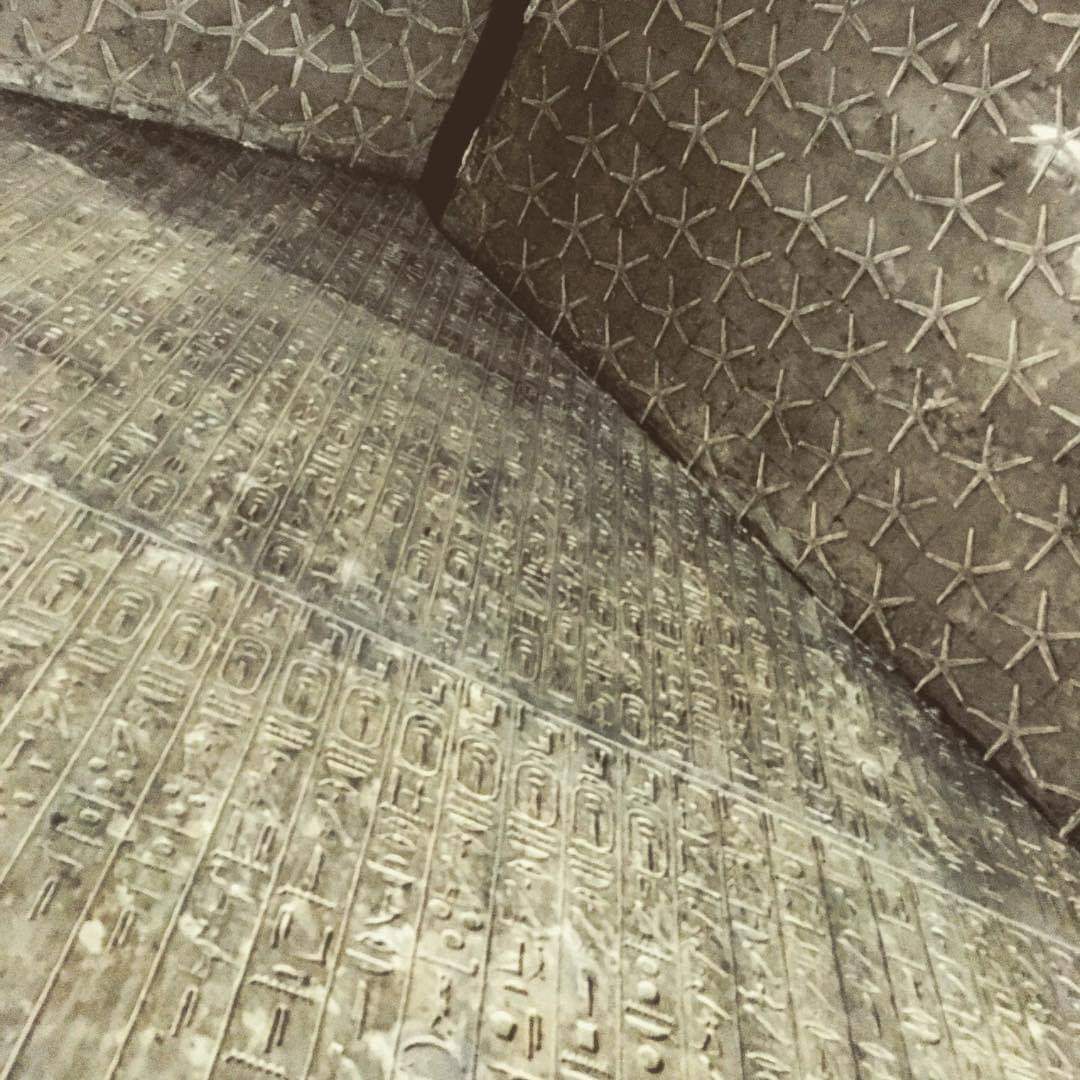 Saqqara Unas’ pyramid is entered by an entrance chapel, of which only some traces remain. The entrance is located at ground level, in the middle of the pyramid’s north side courtyard, rather than in the pyramid’s face.

From the entrance, a descending passage goes down to a small corridor chamber. The horizontal passage after this corridor chamber was once blocked by three granite portcullises, in the hopes it would prevent robbers from entering the pharaoh’s tomb.

After the portcullises, the passage opens into an antechamber of 3.75 x 3.08 metres, located directly under the pyramid’s centre axis.

All the rooms underneath the pyramid were built using fine limestone, except for the west wall of the burial chamber and the western halves of its north and south walls, where alabaster was used.

The ceiling of the burial chamber was painted with golden stars in a dark blue sky, a common feature of Pharaonic tombs, often used to represent Nut, the goddess of the sky and heavens. Unas’ sarcophagus was made of black basalt, representing Egypt’s fertile earth, in an area closely resembling his living quarters, underneath the dark nightly sky.

The vertical columns of the burial chamber, the antechamber and the horizontal passage again contain some of the earliest known examples of the Pyramid Texts. It also contains even more of the oldest collection of religious texts known to mankind.

The pyramid of Unas contains only 283 of the 700 known spells that eventually made up the Pyramid Texts, and form a collection of spells and formulae meant to protect the deceased in the afterlife. 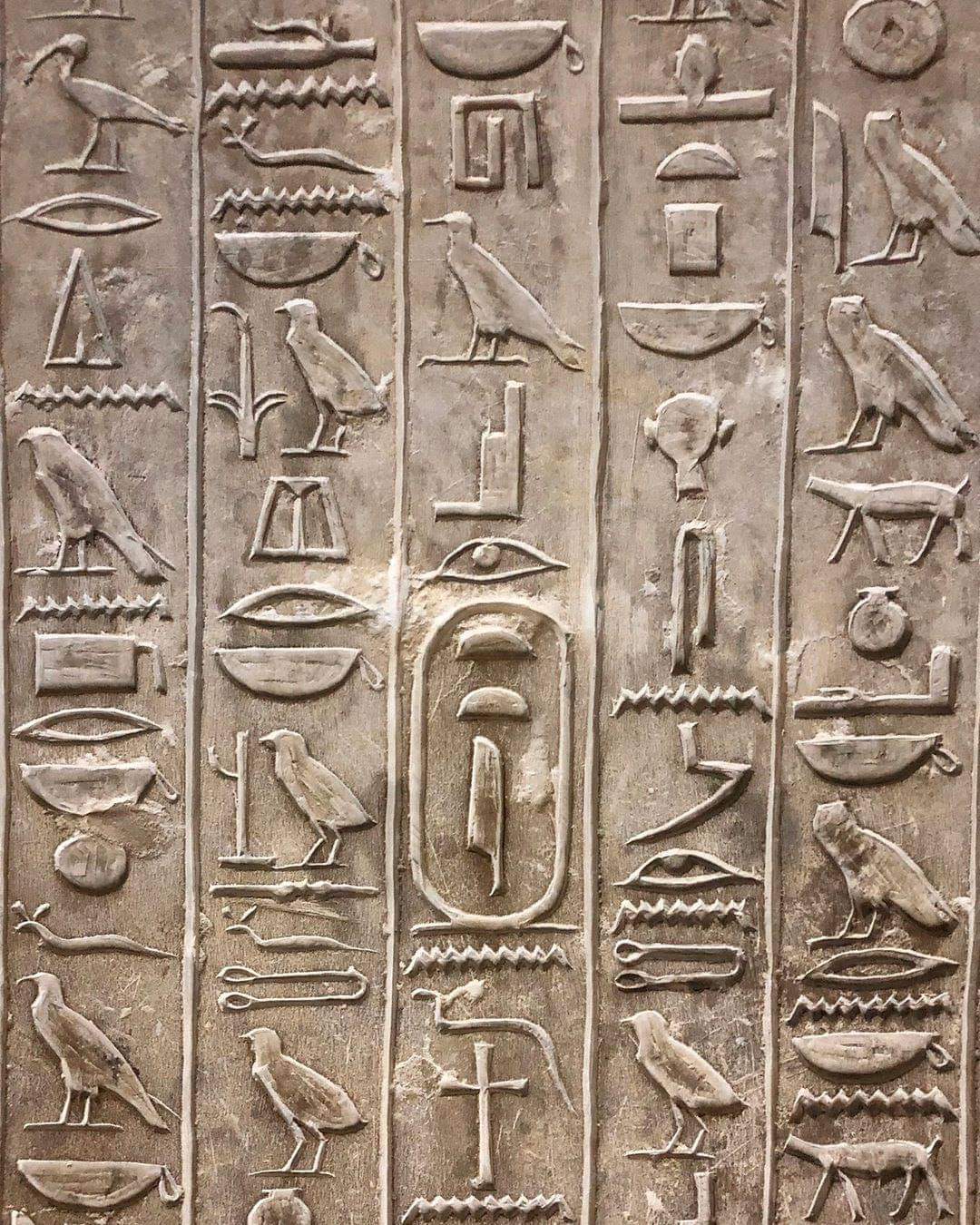 To the left of the sarcophagus’ foot stood the canopic chest which, when the Pharaoh was buried would have contained the major organs. Instead, a left arm and hand, together with pieces of a skull were found in the debris of stones and dirt.

These fragments were mummified in several lengths of linen bandages, preserving some of the skin and hair. Whilst it is not impossible that these remains, which are now preserved in the Cairo Museum, are of the Pharaoh Unas himself, it is unconfirmed.

The rooms underneath the pyramid follow the same basic arrangement as that of Pharaoh Teti’s, who succeeded Unas on the Ancient Egypt throne, to become the first pharaoh of the Sixth Dynasty.

Teti’s final resting place was built in the same style as Unas’, using the steps form, which was based on the mastaba design. The core masonry was made of accreted blocks of stone, encased in fine limestone.

Some of the blocks of the outer casing are still in place on the east side of the pyramid, but, as with so many Ancient Egyptian monuments, the rest were carried away over the centuries by stone-robbers. This constant recycling of ancient monuments has caused the pyramid’s core masonry to become exposed and crumble into the rounded mound of stones seen today.

Teti’s pyramid is entered from the north side, with the entrance located at ground level, along the central axis. It was covered simply with some flagstones, with a small rectangular entrance chapel built directly above the entry point.

The painted reliefs on the chapel’s side walls showed the usual offerings bearers, and a false door of black basalt was built against the chapel’s back wall. Its roof was made of a single limestone slab, decorated with a pattern of stars, with the remaining pivot sockets indicating that wooden doors once closed the chapel’s entrance. 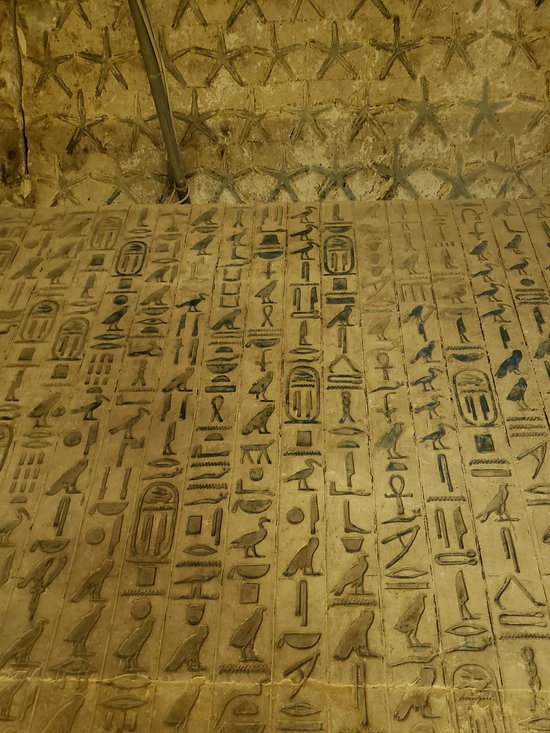 The substructure of Teti’s pyramid is similar to that of Unas’, with the only difference being that Teti’s is slightly larger. Granite covers the walls of the descending passage which opens out into a small chamber which in turn opens out into a horizontal passageway. Three portcullises were intended to block the passage and prevent robbers from desecrating the burial area.

In the interior, visitors can see portions of the hieroglyphic spells that make up the Pyramid Texts up close, as well as a shower of stars.

The horizontal passage opens into the antechamber, which is located under the pyramid’s centre. To the east is a room with three niches that are thought to have once contained some statues of the Pharaoh Teti.

Opposite the three niches, to the west of the antechamber, the burial chamber can be found. Except for the lid, which suffered at the heavy hands of tomb robbers, Teti’s basalt sarcophagus is well preserved. It represents the first example of a sarcophagus with inscriptions in the form of a single band of Pyramid Texts.

As was the case with Unas’ pyramid, the walls in Teti’s burial chamber, the antechamber and part of the horizontal passage are inscribed with Pyramid Texts. The texts are far more damaged than Unas’, which is due to the poorer state of preservation of the pyramid’s substructure.