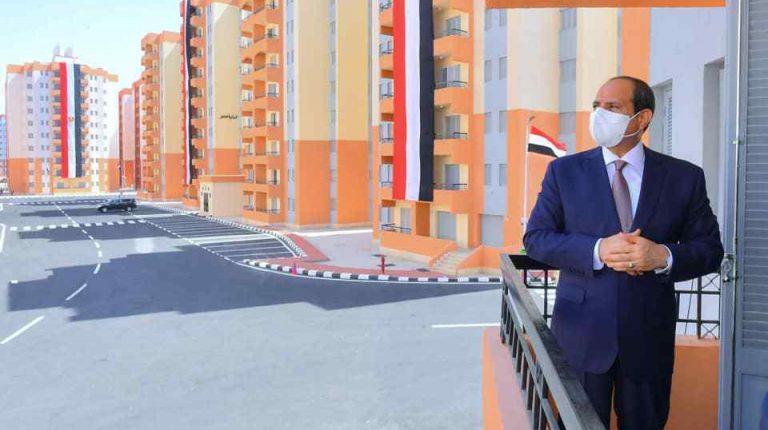 The economic reforms implemented in Egypt over the past five years provided the cornerstone to countering the economic effects of the novel coronavirus (COVID-19), according to President Abdel Fattah Al-Sisi.

Al-Sisi’s comments came during the inauguration of several national projects on Sunday, which included the Al-Asmarat 3 project in Moqattam, Cairo. The project is one of three residential units that will serve thousands of people who had previously lived in informal settlements. It is anticipated that 100,000 people will reside in all three stages of the housing project.

The president said that if it had not been for the success of reform programme and the resilience of the Egyptian people, the effects of the virus would have been more difficult.

“Thanks to recent economic reforms, the Egyptian economy has fared well amid the current difficult circumstances,” Al-Sisi said.

In November 2016, Egypt started implementing a series of strict economic reforms, which saw significant price hikes, among other challenges. The reforms have helped the country’s economy remain resilient in the face of the current ongoing global crisis imposed by the pandemic, the president noted.

Al-Sisi said all measures adopted by the government took into consideration the interest of citizens. They were designed to help the state press ahead with the required progress rather than adding further burdens.

During the inauguration, the president added that the state has, for the last ten years, sought to handle encroachment on state-owned. It has so far managed to contain the crisis, without the need to adopt severe measures.

Adding to Minister of Finance Mohamed Maait’s comments at the inauguration, the president stressed that attempts to expand randomly over state-owned lands cannot be tolerated.

“We will never hesitate to confront and stop this phenomenon,” Al-Sisi said, “The [Egyptian] state will act to restore discipline, so that both the state and citizens are committed to obligations amid measures that regulate that process.”

The President added that a total of 250,000 homes have been provided as part of ongoing housing projects to inhabitants of unsafe areas across the country.

Egypt’s tourism sector, which contributes $14bn to the national economy, has ground to a complete halt due to the coronavirus, with the pandemic also taking its toll on the aviation and trade sectors, Al-Sisi added.

The president added that an initiative to replace old cars used in Egypt’s public transport system, will see newer vehicles introduced that would be equipped with natural gas tanks. The step would ensure savings on the cost of fuel by up to 50%. The initiative applies to all types of vehicles used in public transport, whether microbuses, private cars, or taxis, he noted.

Al-Sisi noted that the cost of converting diesel run cars to natural gas would cost about EGP 8bn, with new cars unable to gain licences until they have been converted to natural gas.

“It is our right to preserve our environment and optimise the available natural gas resources,” he added.

Making reference to the Decent Life initiative launched in collaboration with the Ministry of Social Solidarity, Al-Sisi noted that the initiative looks to help 32 million people living in underprivileged villages. The initiative includes providing potable water facilities, ensuring that all houses are provided with roves, and donating blankets and furniture.

The president concluded by emphasising that the new EGP 2bn guarantee fund will ease the way for citizens to purchase property and other required household items at low cost.

President Al-Sisi said the fund aims to provide those facing difficulties with the needed bank-required guarantees to purchase an apartment or any commodity. He stressed that all citizens applying for an apartment will receive it through a low-cost financing tool that will be provided through the fund.