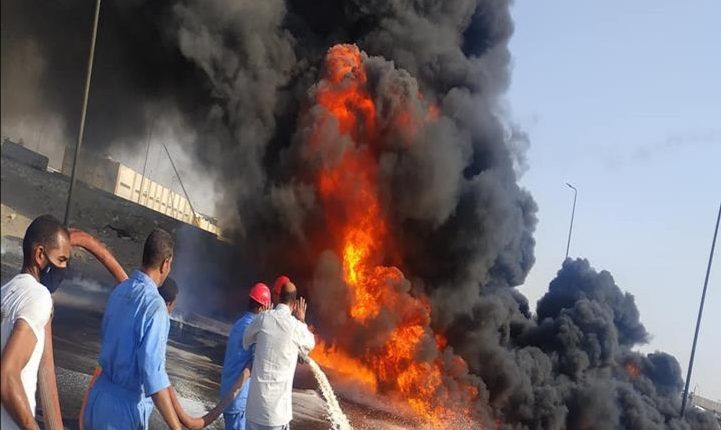 A total of 17 people were injured after a major fire broke out at a mazut pipeline on Cairo-Ismailia road on Tuesday night, according to the Health Ministry.

The ministry added that the injured were transferred instantly to the nearest hospital.

About 18 fire engines were directed to the site, in an effort to contain the fire and preventing further spread to neighbouring areas. All roads leading to the Cairo-Ismailia desert road were closed until containing the fire.

Official sources said Minister of Petroleum Tarek El-Molla has headed to the fire site, adding that an investigation will be opened into the incident.

The sources said the initial examination indicates a possible leakage from a broken mazut pipeline, which led to a sudden explosion.

Egypt’s Prime Minster Mostafa Madbouly instructed Minister El-Molla to follow up on the incident and determine the reasons of the explosion.

Primary investigations also said that as many as 30 cars and a vehicle showroom have been charred in the huge fire. The Ministry of Interior’s crime laboratory will examine the fire site to define the damage.

80% of Karish and Tanin development in Mediterranean completed: Energean

Rameda acquires one of best-selling generic NSAIDs in Egypt