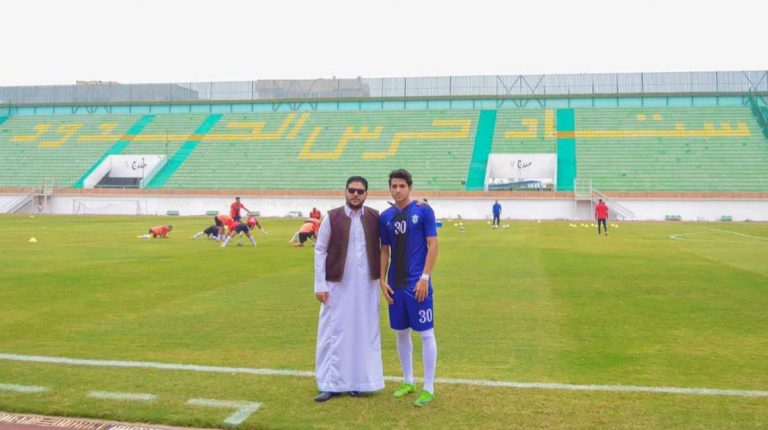 Established in 1962, Al-Hammam SC is the oldest and most famous sporting club in Matrouh governorate. The club was named after the city it is based in. Al-Hammam city is located on the North Coast, about 62 km from Alexandria.

The club was on the verge of promotion to Egypt’s Premier League, when in 2012, the Port Said Stadium riot occurred, which saw that premier league season cancelled.

But there is something quite unusual about this club – and that is its president, Nour Raslan, who has chaired the club since the tender age of 27.

Raslan told Daily News Egypt that he was originally the club’s Vice President, until the club’s president decided to resign only 18 months into his term. The club’s Board of Directors, who preferred not to hold elections for the presidency position, instead promoted Raslan to the Chairperson position.

At the time, Raslan, who had been a member of the Board of Directors since he was 22, had been supervising the club’s football team. He said that he has had no problems in dealing with the additional responsibility as Chairperson, despite his young age.

When he meets officials, governors, and ministers who find out that he is so young, they tend to encourage him.

“I find it easier to talk to coaches and players, since there is not an age gap,” he said. “We have become like friends working together in harmony.”

Raslan, who is now 30 and holds a BA in Law, talked about the financial resources of the club. He revealed that contributions from the board members are one of the main resources.

Whereas the largest bulk of funding comes from the Matrouh governorate, he noted that the Ministry of Youth and Sports and the Egyptian Football Association (EFA) also provide funding. The budget varies from year to year, Raslan said, noting that the biggest budget the club has ever had was EGP 3.5m.

He explained, however, that a large budget is not always the driver of success, highlighting a season when the club spent EGP 1.4m at a time when it was competing to get promoted to the premier league. Other clubs, he noted, spent anywhere from EGP 6m to EGP 11m, but they did not make it to the premier league.

“We do this by selecting promising players who want to prove their skills,” he explained. “We keep transparency in our dealings, so they give us their best.”

In the latest elections, Raslan returned to the Vice President position, with his uncle taking over as Chairperson of the club.

“My ambition has no limits. I announced my candidacy for the EFA elections,” he noted. “I will start my electoral campaign within days, and after that, I have aspirations to become president of the EFA, then the Confederation of African Football, and FIFA, but one step at a time.”