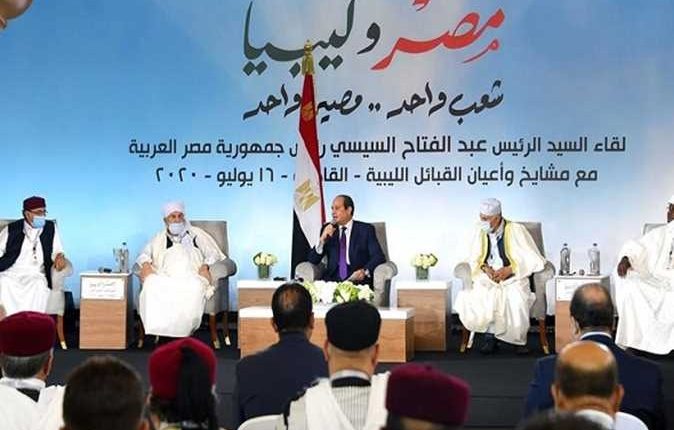 President Abdel Fattah Al-Sisi met in Cairo, on Thursday, with representatives of the Libyan tribes. The meeting, entitled “Egypt, Libya – one people, one destiny”, reviewed Egypt’s efforts and role in ending the Libyan conflict and saving its unity and sovereignty.

Al-Sisi stressed that the main objective behind his country’s efforts regarding Libya has been to activate the free will of the Libyan people, to improve the country’s future for coming generations.

“Libya’s security and stability is part of Egypt’s national security. We want a unified state in Libya. The Libyan people who will decide the destiny of their country, and Egypt rejects foreign interventions in Libya’s affairs,” Al-Sisi stressed.

He added that Egypt has suffered from terrorism, and it will not allow militias in Libya to come closer to Egypt.

“Egypt will never let Libya turn into centre for terrorism even if it has to [militarily] enter Libya. Despite having strongest army in Africa and region, and its ability to intervene to change the scene, Egypt insists on peaceful solution,” the president said.

Al-Sisi renewed call for training and preparation of Libyan youth as cornerstone of a Libyan army, explaining that the Libyan parliament is only legitimate elected body in country, and has requested Egypt’s support in facing foreign interventions.

The Egyptian president stressed that Libyan tribes have important role to play in supporting political resolutions and Egyptian intervention in Libya.

During an inspection of Egypt’s Western Military Zone in June, Al-Sisi said that Egypt is ready to support Libyan tribes in defending their country’s security and stability. He also emphasised Egypt’s readiness to receive, train and prepare some members of Libya’s tribes.

In a statement early on Tuesday, Libya’s House of Representatives said that Egypt has the right to intervene in Libya to protect the national security of both countries. It added that Egypt also has the right to deter “the blatant Turkish intervention and invasion of Libya”, if it observes an imminent threat.