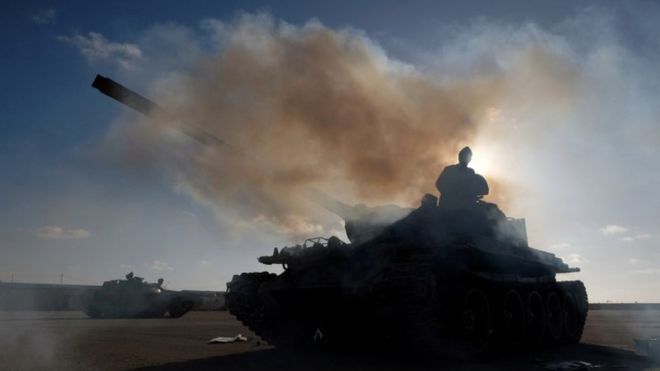 Egypt has denounced Turkish attempts to cast doubt on the legitimacy of Libyan calls for Egyptian support against militias and extremist groups that have been brought to Libya.

In a Saturday statement, Egyptian Ministry of Foreign Affairs Spokesperson Ahmed Hafez renewed the country’s rejection of Turkey’s political and military intervention in Arab affairs, including in the Iraqi, Syrian, and Libyan crises.

Hafez noted that the intervention lacks any legal basis, and even goes so far as to violate United Nations (UN) Security Council resolutions.

Egyptian ambassador and former assistant foreign minister, Mohamed Abdel Hakam, said, “Egypt will never stand idly by [when there are] attempts threatening its national security from militias, terrorists or any parties.”

Abdel Hakam told Daily News Egypt that the Egyptian state aims to use possible intervention in Libya to protect its western borders, restore Libya’s stability and security, and stop the bloodshed in its neighbour. Egypt is also looking to reach a ceasefire and to prevent any forces or militias from crossing the “Sirte and Jufra red-line.”

Meanwhile, Hafez added that Turkish support of a certain side in conflicts, based on its ideological approach, was wasting the Turkish people resources in never-ending wars.

During the meeting, Al-Sisi said that he will request parliamentary approval to intervene in Egypt’s war-torn neighbour, and that they will only interfere by request of the Libyan people.

The president reaffirmed that Egypt has one of the strongest armies in the region, which is able to crucially change Libya’s military scene.

Last week, Turkish Minister of Foreign Affairs Mevlüt Çavuşoğlu said that his country is preparing for a military operation in Sirte.

Ambassador Abdel Hakam said that Egyptian intervention in Libya is legitimate based on the UN’s Article number 51 regarding the right to self-defence.

The article notes, “Nothing in the present Charter shall impair the inherent right of individual or collective self-defence if an armed attack occurs against a Member of the United Nation until the

Abdel Hakam noted that Egypt’s intervention comes upon a request from the Eastern Libyan Parliament, headed by Aguila Saleh.

He added, “Aguila Saleh and the Libyan tributes urged Al-Sisi to intervene to support the Libyan army against Turkey’s backed militias, mercenaries and invasion.”

Abdel Hakam noted that President Al-Sisi received a “popular mandate” from Libyans to support them in their fight “against militias and Turkish invasion.”

He said that Turkey is deploying mercenaries daily to Libya to fuel the conflict in the country and support militias. “Egypt will never allow terrorist militias or mercenaries to exist on its (Western) borders,” Abdel Hakam said.

“The international community is watching what is happening in Libya, and Turkish support to militias with military equipment and its deployment to Syrian militias is a flagrant violation of the Security Council resolution [arms embargo], but it [the international community] has done nothing to stop it,” Abdel Hakam noted. “The Turkish intervention in Libya is illegitimate and violates the Libyan sovereignty as well as international laws and charters. Such intervention not only threats Libya but the security of neighbouring countries.”

Meanwhile, France, Italy, and Germany announced they are “ready to consider” imposing sanctions on foreign powers that violate Libya arms embargo, according to a Saturday joint statement.

Turkey has recently intensified its military support for the GNA. It is already providing drones and air defence systems, weapons, and Syrian mercenaries, which have helped the GNA claim key victories in recent months against its rival, the LAAF, which is backed by Egypt and the UAE.

Moreover, Abdel Hakam described the US stance regarding the crisis in Libya as “ambiguous.”

“The US is observing Turkey while deploying mercenaries to Libya and do nothing,” he noted.

“We cannot observe a clear and decisive stance regarding what is happening in Libya. We hope the US administration would support the Tobruk’s parliament and LAAF headed by Khalifa Haftar in their fight against terrorism and mercenaries that Turkey brings to the war-torn country,” Abdel Hakam stressed.

He emphasised the need for a unified and decisive position to combat Turkey actions in the region through imposing economic sanctions to deter it and to make it respect the international laws.