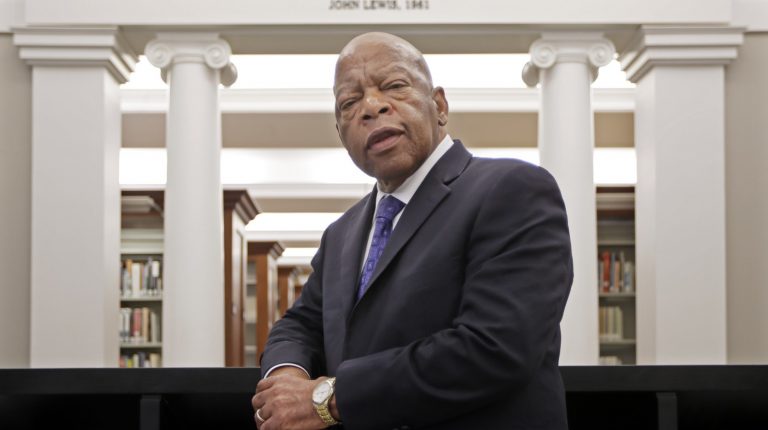 U.S. President Donald Trump on Saturday said he was saddened by the death of John Lewis, congressman representing the state of Georgia and a revered civil rights leader.

“Saddened to hear the news of civil rights hero John Lewis passing,” Trump tweeted, offering his first public remarks about the death of Lewis, which was announced late Friday. The president said that first lady “Melania and I send our prayers to (him) and his family.”

The White House issued a presidential proclamation earlier on Saturday ordering flags to be flown at half-mast throughout the day in commemoration of the late congressman, who died at the age of 80 after having battled with pancreatic cancer since December 2019. Trump was criticized by his opponents for making a statement on the death of Lewis too late.

Public feud between the two dated back to Trump’s inauguration in 2017, which Lewis refused to attend, calling Trump not a “legitimate president.” In return, Trump attacked Lewis by saying the district he represented was “horrible.”
Born into a family of sharecroppers in 1940, he was hailed as a civil rights icon for his leadership in the civil rights movement in the 1960s.

A founder and early leader of the Student Nonviolent Coordinating Committee, Lewis led protests against racial injustice in an era in which apartheid was still rampant in the American South.

He was the youngest and longest surviving speakers at the 1963 March on Washington for Jobs and Freedom movement, which culminated in Martin Luther King Jr.’s historic “I Have a Dream” speech in front of the Lincoln Memorial.
Tributes have been pouring in for Lewis since his passing.

House Speaker Nancy Pelosi, a Democrat, called him “a titan of the civil rights movement whose goodness, faith and bravery transformed our nation.” Senate Majority Leader Mitch McConnell, a Republican, lauded him as a “pioneering civil rights leader who put his life on the line to fight racism, promote equal rights, and bring our nation into greater alignment with its founding principles.”

Calling Lewis “a giant walking among us,” presumptive Democratic presidential nominee Joe Biden said he wished that Lewis’s life and legacy may continue inspiring those in pursuit for “justice, equality and what is right.”

Barack Obama, the first African American president of the United States, awarded Lewis the Presidential Medal of Freedom in 2011, calling him the “conscience of the United States Congress” on the occasion. “I stood on his shoulders,” the former president wrote in words commemorating the revered figure.