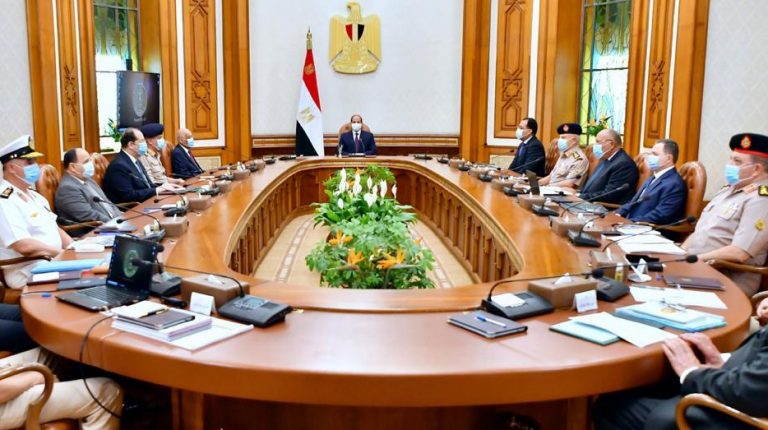 Egypt’s President Abdel Fattah Al-Sisi chaired, on Sunday, a National Defense Council meeting that discussed the political, security, and military situations on all strategic fronts. The meeting addressed the latest developments about the disputed Ethiopian dam and the conflict in Libya.

President Al-Sisi was briefed on developments regarding the Grand Ethiopian Renaissance Dam (GERD) negotiations. This also covered the latest efforts to develop a comprehensive agreement that meets the aspirations and demands of the three countries involved in the negotiations, namely Egypt, Sudan, and Ethiopia.

Asserting the Libyan file as one of the highest priorities in Egypt’s foreign policy, the Council discussed developments in Libya, in light of Egypt’s peace efforts in the neighbouring country. It added that Libyan security is an integral part of Egyptian and Arab national security.

In this context, the Council also affirmed its commitment to a political solution to end the Libyan crisis that would achieve a preservation of the country’s sovereignty and national and regional unity.

On Saturday, Libya’s Government of National Accord (GNA) moved fighters closer to the northern city of Sirte. The city is a gateway to Libya’s main oil terminals that the GNA says it plans to recapture from the eastern-based Libyan Arab Armed Forces (LAAF).

Witnesses and GNA military commanders said a column of about 200 vehicles moved eastwards along the Mediterranean coast from Misrata, towards the town of Tawergha, about a third of the way to Sirte.

The GNA recently recaptured most of the LAAF-held territory in northwest Libya, ending LAAF’s 14-month campaign to take the capital, Tripoli, before the new front line solidified between Misrata and Sirte.

Backed by Turkey, the GNA has said it will recapture Sirte and an LAAF airbase at Jufra. But Egypt, which with the UAE and Russia backs the LAAF, has threatened to send troops into Libya if the GNA and Turkish forces try to seize Sirte.

The US has said Moscow sent warplanes to Jufra via Syria to act in support of Russian mercenaries who are fighting alongside the LAAF, a claim that both Moscow and the LAAF deny.

The LAAF has itself sent fighters and weapons to bolster its defence of Sirte. The city is already badly battered from earlier phases of warfare and chaos since the 2011 revolution against Libya’s former long-time leader Muammar Gaddafi.