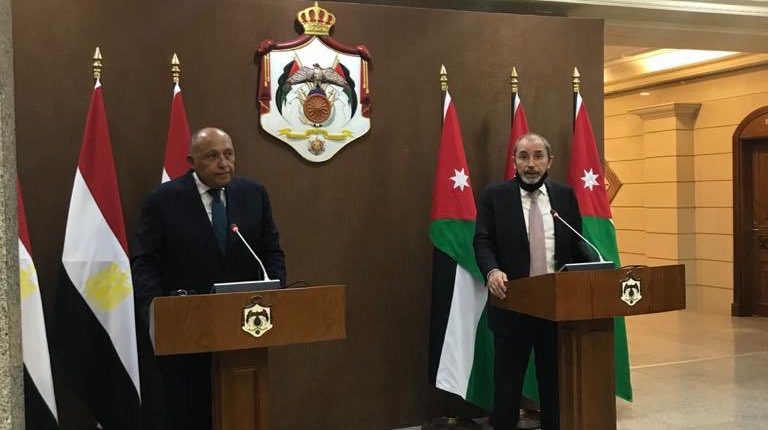 Egypt’s Minister of Foreign Affairs Sameh Shoukry arrived to the Jordanian capital Amman, on Sunday, for talks with his Jordanian counterpart, Ayman Safadi, according to a statement by Foreign Ministry Spokesperson Ahmed Hafez.

During the visit, Shoukry was received by Jordan’s King Abdullah II.

Hafez added that Shoukry and Safadi are set to address the latest regional developments and updates related to the Palestinian Cause.

During a press conference with Safadi, Shoukry said that Egypt is concerned with the situation in Syria, and that Cairo will push for peace process.

He further pointed out that there are attempts from regional powers to intervene in the Arab region, particularly in Libya where the situation there is affecting the Arab national security.

For his part, Safadi praised Egypt’s rational policy in dealing with the dispute over the Ethiopian dam on the Blue Nile. He stressed that Egypt’s water security is part of the Arab national security.

Following his visit to Amman, Shoukry will head to Palestine to meet with President of the Palestinian Authority, Mahmoud Abbas.

The visit comes amid Israeli plans to annex more Palestinian territories, and Egyptian President Abdel Fattah Al-Sisi’s keenness to support the Palestinian people against these plans. The end goal is to see the establishment of an independent Palestinian state.

Two weeks ago, Israel announced its plans to annex parts of the occupied West Bank. Some European countries are expected to either impose sanctions on Israel or recognise a Palestinian state as a result of the recent Israeli actions.

In April, United Nations (UN) Secretary-General António Guterres stressed the organisation’s reaction to Israel’s intended annexation of settlements or any part of the occupied West Bank.

In a letter to Arab League Secretary-General Ahmed Abou El-Gheit, Guterres said that the door will close on Israeli-Palestinian negotiations should Israel continue its plans to annexPalestinian lands. Guterres also noted that the Israeli move could eradicate the likelihood of a two state solution.

Guterres expressed his concerns over the Israeli plans, saying that any step to annex settlements or any part of the West Bank, including Eastern Jerusalem, will be considered a violation of the international law.