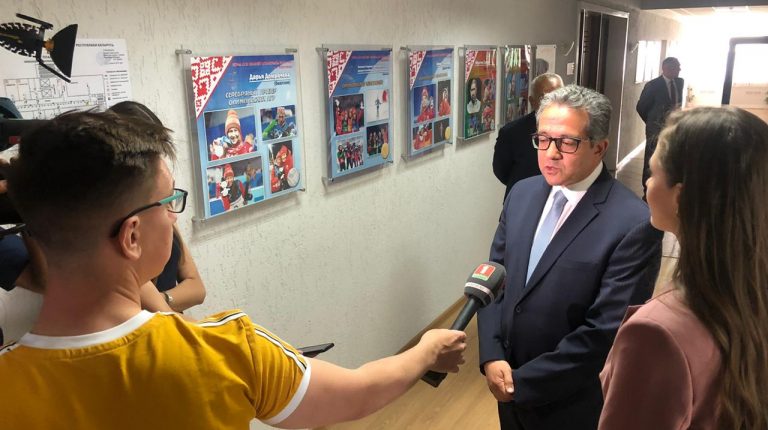 The Red Sea resorts of Sharm El-Sheikh and Hurghada have received 23 Belarusian flights since the resumption of Egypt’s tourism in early July, according to Minister of Tourism and Antiquities Khaled El-Anany.

These include 12 trips to Sharm El-Sheikh and 11 trips to Hurghada, El-Anany added.

“Belarusian tourists were some of the first tourists to return to Egypt in the first 48 hours following the resumption of tourism in Egypt, trusting the precautionary and preventive measures and requirements taken by Egypt,” El-Anany added.

The minister’s remarks came on the sidelines of his official visit at the head of an Egyptian tourist delegation to Belarusian capital Minsk, during which he held a press conference with Belorussia’s Minister of Sports and Tourism.

During the press conference, El-Anany responded to enquiries on Egypt’s resumption of tourism, and reviewed the precautionary measures taken by the Egyptian government at various centres popular with visitors to Egypt.

The minister noted that these measures are in place at airports, hotels and tourist establishments, as well as tourist activity centres, archaeological sites and museums. He added they have been put in place to ensure the health and safety of all visitors and workers in Egypt’s tourism sector.

El-Anany noted that Egypt has resumed tourism in three of its coastal tourism-centric governorates, namely the Red Sea, South Sinai, and Matrouh as a first stage. This first step was taken as these governorates have a low population density and extremely few cases of the novel coronavirus (COVID-19).

The minister pointed out that the World Tourism and Travel Council (WTTC) has granted Egypt a Safe Travel stamp. He said that, during a recent visit to Sharm El-Sheikh and Hurghada, he met with many tourists, including from Belorussia, who emphasised the commitment by all facilities to the government’s health and safety requirements. The tourists added that these measures did not negatively affect their enjoyment.

El-Anany also stressed that tourists who have visited Egypt since the resumption of international flights to Egypt on 1 July have returned to their countries, with no coronavirus infections reported.

During his visit to Belorussia, El-Anany held a number of interviews during which he fielded questions on Nile cruises between Luxor and Aswan, as well as visits to archaeological areas and trip prices. He also pointed out the desire on the Belarusian side to organise programmes to visit monuments in Cairo.