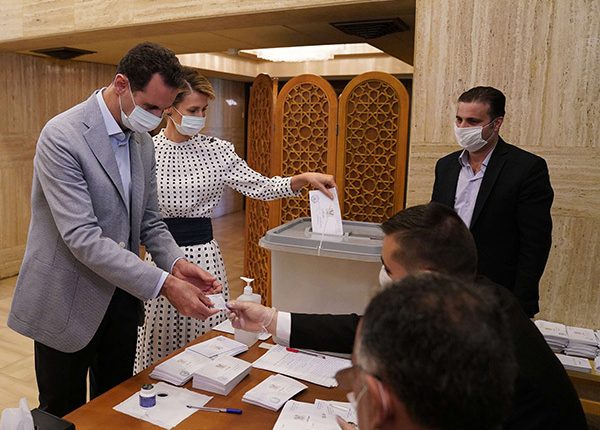 Syria’s parliamentary elections started on Sunday, after being postponed twice due to the novel coronavirus (COVID-19) pandemic, with 2,100 candidates contesting for 250 parliamentary seats across 15 multi-seat constituencies.

The current elections are also being held for the first time in formerly opposition-held strongholds, in addition to areas either fully or partially controlled by the government. No vote was being held, however, in the northwestern province of Idlib, which is the last rebel stronghold in Syria controlled by Kurdish fighters.

The elections have twice been delayed since April 2020, as part of precautionary measures to curb the spread of the coronavirus. The country has so far reported 496 cases of the virus and 25 deaths. Syrian refugees who have fled the war and are currently resident abroad are not eligible to vote.

Workers at polling stations were masked and gloved, with voters requested to use their own pens in the sanitised booths. Once ballots were cast, voters had to leave immediately as no gatherings were allowed inside. People are also being asked to maintain safe distances between each other whilst waiting for their turn to vote.

Over 7,400 polling stations have been set up in 15 voting districts, including 1,400 stations where troops and members of the country’s security services will vote, Syria’s electoral commission announced. Results are expected to be announced this coming Tuesday.

In June, Syria witnessed a new wave of US sanctions, which led to a worsening of the country’s economic conditions, with a crash in the local currency occurring on the back of the sanctions.

In 2019, food prices in Syria increased over 200%, with current food prices standing at 20 times their pre-war levels, according to the World Food Programme (WFP). The WFP added that more than 80% of people already live in poverty and face an “unprecedented hunger crisis”.

The last parliamentary elections were held in April 2016, with large parts of Syria outside of government control and few turning out to vote.