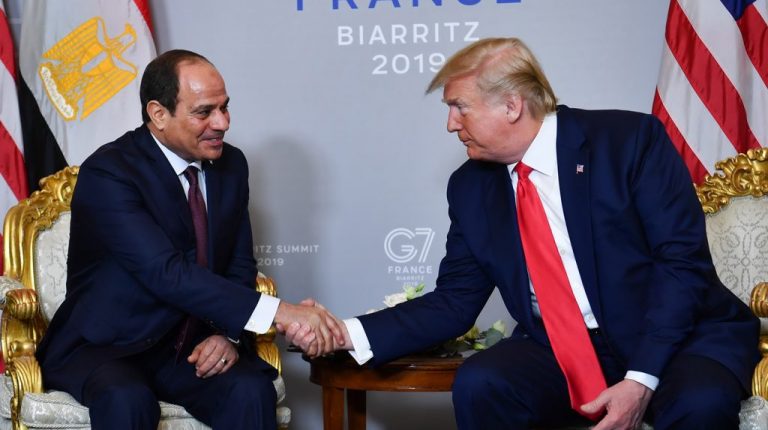 Egypt’s President Abdel Fattah Al-Sisi and his US counterpart, Donald Trump, discussed via telephone on Monday, the latest developments of the conflict in Libya  and Ethiopia’s dam dispute.

During the call, President Al-Sisi stressed that Egypt maintains consistent strategic position on the Libyan issue, which aims to restore balance and preserve its neighbour’s national institutions.

Al-Sisi also noted that Egypt’s interest in the Libyan crisis seeks to prevent a further deterioration in Libya’s security.

Egypt also seeks to stop illegal foreign interference in its neighbouring country, which has complicated and escalated the Libyan crisis to the extent that the repercussions will potentially affect the entire Arab region’s security and stability.

For his part, President Trump expressed his understanding of Egypt’s concerns related to the negative repercussions on the region of the Libyan crisis. He praised Egypt’s efforts in Libya, which look to enhance the course of the latter’s political process.

The phone call between the two presidents also sought to discuss other items of importance, including the disputed Grand Ethiopian Renaissance Dam (GERD), and boosting relations between Egypt and the US.

This comes as a “secret session” was held by Egypt’s Parliament on Monday to decide on whether to grant President Al-Sisi the authorisation to send Egyptian forces into Libya. The move would come in accordance with Article 152 of the Egyptian Constitution, which stipulates that the state does not declare war and does not send its forces on combat missions except with approval of the House of Representatives.