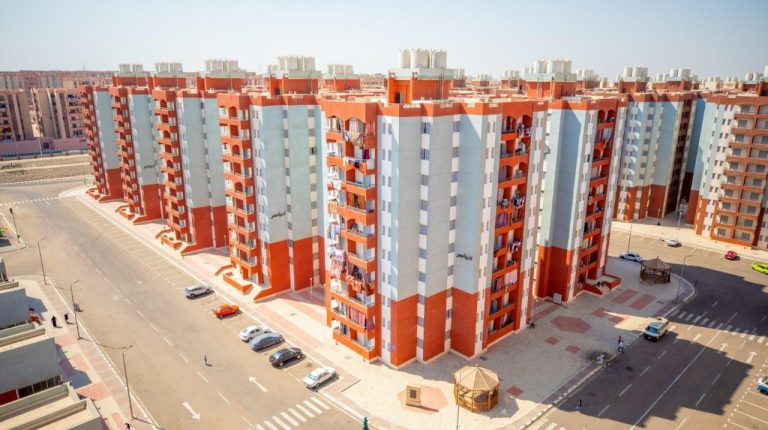 The Egyptian government is taking steps to rehabilitate Ashwa’yat, or informal housing, across the country that are gradually sprawling out of control. As part of its scaling-up of informal settlement rehabilitation projects, the government is now looking to provide affordable housing for those areas’ dwellers.

On 12 July, President Abdel Fattah Al-Sisi inaugurated the third phase of the country’s vast residential complex, the Al-Asmarat, located in southern Cairo. Informal housing areas dwellers will be relocated to the subsidised accommodation that makes up the housing complex as part of state-efforts to improve living conditions among Egyptian citizens.

President Al-Sisi stated that the state is keen to ensure that all citizens can benefit from a secure living environment within these housing projects. The units are allotted at low, long-term rentals of EGP 350 ($22) per month, while the actual construction cost stands at EGP 600,000 ($37,607) per unit, according to Al-Sisi.

The eventual goal is to ensure that the Al-Asmarat housing complex would be inhabitable for 100,000 citizens who were previously living in informal housing areas.

On the sidelines of the project inauguration, Cairo Governor Khaled Abdel-Aal said that a total of EGP 280bn ($17.548bn) has been spent on 2,272 development projects in six years. The projects are aimed at improving the quality of life in the capital, and for the development of infrastructure.

The Al-Asmarat housing complex is one of several residential quarters that have been erected as part of informal housing areas rehabilitation schemes adopted by the government.

The countrywide rehabilitation programme was set in motion as of 2014. At the time, a new ministry for urban development was formed, although it was not long before it was cancelled in 2015 to be annexed to the Ministry of Housing.

In May, the government issued a directive to temporarily suspend all building permits in four governorates, including Cairo and Alexandria, for a period of six months. The decision, which was effective as of May, is aimed at reducing the pressures of Egypt’s urbanisation process.

According to a study conducted by Egypt’s Central Agency for Public Mobilization and Statistics (CAPMAS) in 2016, informal housing represents 38.6% of the overall housing in Egypt. They are scattered across 226 cities out of 234 cities nationwide.

However, the study notes that there are only eight informal housing-free cities located in four governorates, namely: Suez, Sharqeya, Kafr El-Sheikh, and Giza.

From Alexandria to the heart of Cairo

In western Alexandria, the Maawa El-Sayadin area, or the fishermen’s shelter, was long considered the most notorious of informal housing, being unsafe and densely populated. As part of the government’s ongoing development measures, the area has now been completely demolished, and the new social housing complex of Bashayer Al-Khair was built instead.

The total number of housing units in the project now stands at 14,125 units, which are available for a monthly rental of EGP 300 ($19) per unit.

Speaking on the sidelines of the project’s third phase’s inauguration in May, Ahmed Al-Azazi, Assistant Head of the Armed Forces Engineering Authority, which is behind the project, said up to five extra phases are planned as part of the housing development. The new phases will bring the total number of housing units to 80,000 to accommodate about 400,000 people.

Al-Azazi added that commercial spaces on a total of area of about 650 sqm would be provided as part of the project.

The government’s efforts in revamping informal housing that are sustainable in the long run are also noticeably appearing in Cairo.

The government has intervened in demolishing the blighted area of Tal El-Akareb (Scorpions’ Hill) located in the Sayeda Zeinab district. In its place, a new residential housing called Rawdat Al-Sayeda, covering 7 feddan and comprised of 816 units, was constructed.

Rawdat Al-Sayeda, which opened up in 2019, boasts a simple building style which adopted Islamic architecture, making the area compatible with the religious atmosphere of the area.

Moreover, the shanty-town area of Maspero, located on the River Nile in the heart of Cairo’s bustling downtown, has been completely demolished, for a long planned-renovation to take place. According to remarks made by Executive Director of the Informal Settlements Development Fund (ISDF), Khaled Sedeq, in early July, three residential towers featuring 1,000 units will be set for delivery in the next year for the area residents.

Sedeq noted that all new residential projects replacing informal areas will be completed by the end of 2020. It is expected that the rehabilitation of unplanned housing situated on areas of more than 160,000 feddan will be completed by 2030, at a cost of EGP 318bn (some $19,924bn).

Sayed Ahmed Kassem, Professor of Urban Geography at Assiut University, told Daily News Egypt that the rehabilitation of informal settlements has been a significant challenge. He noted that the new housing projects would help in reducing the severe overcrowding that frequently occurs in “appalling” informal housing areas.

In these areas, you can find an entire family living in a room the size of a single-car garage, Kassem adds.

He notes that informal housing is not confined to poor-quality buildings, but is, in fact, a complex interplay that has impacted the mindset of its dwellers. Therefore, he urged against turning the new housings into informal settlements again.

Meanwhile, Kassem clarifies that there are residences in inner city districts that have typical informal characteristics and need rehabilitation, noting that these are congested with the highest concentration of people.