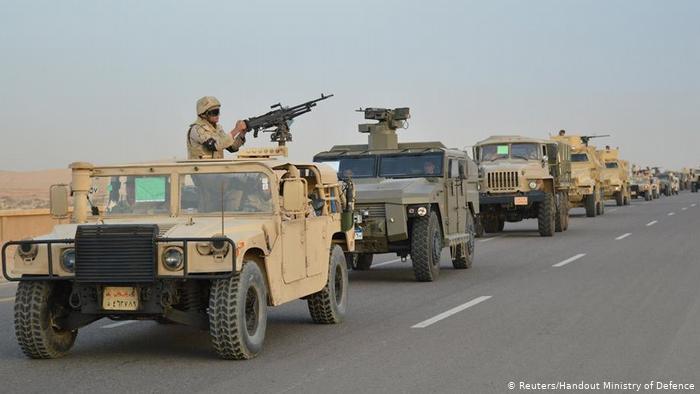 Egypt’s Parliament unanimously voted in favour of sending military forces into Libya to counter terrorism in the neighbouring country, during a confidential session on Monday.

Parliament Speaker Ali Abdel Aal chaired the session in attendance of 510 parliamentary members to vote on sending Egyptian forces on combat missions outside the borders to defend the country’s national security.

Parliament said these missions will defend Egyptian national security against the actions of criminal militias and foreign terrorist elements.

Article 152 of Egypt’s Constitution stipulates that the state does not declare war and does not send its forces on combat missions except after the approval of the House of Representatives.

The session was attended by Minister of Parliamentary Affairs Alaa Fouad and Assistant Minister of Defence Major General Mamdouh Shaheen.

During the session, MPs also discussed the outcomes of the recent National Defence Council’s meeting held on Sunday under the chairmanship of President Abdel Fattah Al-Sisi, and the threats that the state is exposed to from the western border.

The House of Representatives stressed that the Egyptian nation has, throughout its history, called for peace, but it does not accept encroachment on its territory or the neglecting of its rights.

It added that Egypt is extremely capable of defending itself and its interests, as well as those of its brothers and neighbours from any danger or threat.

Earlier on Monday, President Al-Sisi and his US counterpart, Donald Trump, discussed via telephone the latest developments of the Libyan crisis and Ethiopia’s dam dispute.

During the call, President Al-Sisi stressed that Egypt maintains consistent strategic position on the Libyan issue, which aims to restore balance and preserve its neighbour’s national institutions.

Egypt also seeks to stop illegal foreign interference in its neighbouring country, which has complicated and escalated the Libyan crisis to the extent that the repercussions will potentially affect the entire Arab region’s security and stability.

For his part, President Trump expressed his understanding of Egypt’s concerns related to the negative repercussions on the region of the Libyan crisis. He praised Egypt’s efforts in Libya, which look to enhance the course of the latter’s political process.

The phone call between the two presidents also sought to discuss other items of importance, including the disputed Ethiopian dam, and boosting relations between Egypt and the US.

In June, President Al-Sisi had warned that any militia advance towards Libya’s Sirte and Jufra cities would be a “red line” that cannot be crossed.

Earlier this week, Al-Sisi met with a number of representatives from Libyan tribes, who announced their support for Egyptian intervention in Libya to defend its national security.

Since the fall of former Libyan leader Muammar Gaddafi in 2011, the country has been split between two powers: the Libyan Arab Armed Forces (LAAF), led by Commander Khalifa Haftar, in the face of the Government of National Accord (GNA). The LAAF is backed by Egypt and the UAE, whilst the internationally recognised GNA has been receiving support from Turkey.

The Egyptian parliament’s announcement coincides with the GNA sending further reinforcements to the front lines within the Libyan coastal city of Sirte.