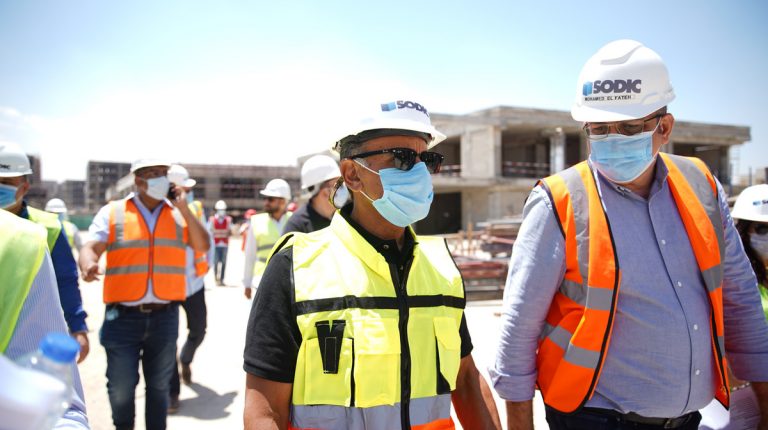 The Six of October Development and Investment Company (SODIC) has awarded EGP 1.2bn worth construction contracts in the company’s SODIC East project since 2018, according to the company’s Managing Director Magued Sharif.

During a site visit to the project, Sherif said, “Since breaking ground in 2018, the company has awarded over EGP 1.2bn in construction contracts. All launched parcels are well underway with construction on schedule for delivery to start in 2021.”

“There are 15 contractors and over 2,500 workers on site, and over 65% of the 776 single family homes under construction have completed concrete skeletons with exterior finishes begun in the earlier phases,” Sherif added, “Infrastructure work is underway starting with the project’s main roads as well as the foundations for water, sewage and electric connections.”

Spanning over 655 feddan and master-planned by renowned Massachusetts-based design firm, Sasaki, SODIC East is a comprehensive integrated mixed-use development with over 84% open and green spaces.

In addition to its planned schools and commercial and entertainment components, the project boasts a six feddan park, destined to be the first camping site of its size in Egypt. This runs adjacent to a 41 acre sports club, to be managed by Club S, company’s own dedicated sports platform.

“SODIC East is planned to be the twin city of SODIC West, a gateway to a modern progressive lifestyle within a contemporary meticulously planned city,” Sherif added, “At its early development stages SODIC East is a great opportunity for early adopters and a perfect alternative for New Cairo which the younger generation of quality lifestyle seekers have been priced out from.”

Developed in partnership with the Heliopolis Company for Housing and Development (HHD), SODIC East is ideally located between two strategic highways, the Suez & Ismailia Desert Roads. It is also a convenient ten minute drive from New Cairo and the New Administrative Capital via the newly developed and upgraded network of roads.

HHD to complete amendments of development plan next week

SODIC records EGP 7.3bn in contracted sales, a growth of 32%