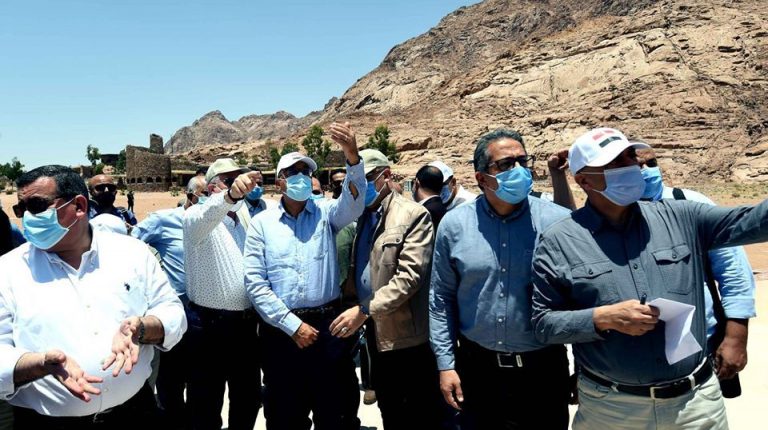 Egypt’s Prime Minister Mostafa Madbouly has instructed for the Wadi Al Raha area near to Saint Catherine to be developed in preparation for establishing an integrated tourist city.

According to a Tuesday cabinet statement, Madbouly’s instructions came during a visit to the city of Saint Catherine in South Sinai, in which several ministers and officials were in attendance. These included Minister of Tourism and Antiquities Khaled El-Anany, Minister of Housing, Utilities and Urban Communities Assem El-Gazzar, and Minister of Local Development Mahmoud Shaarawi.

During the inspection tour, Madbouly was briefed on the history, as well as religious significance, of the Wadi Al Raha area, which is considered a promising and attractive area for tourists.

The prime minister also inspected the lounge of the late President Mohamed Anwar Sadat which was inaugurated in October 2019, following restoration and development works. The lounge, which was transformed into a museum and tourist attraction, includes private effects that belonged to the late president.

Madbouly’s visit aimed to determine which development projects the city of Saint Catherine needs, and to put in place the plans to implement them.

The visit came in response to calls made by President Abdel Fattah Al-Sisi to develop Saint Catherine, and to establish a new city to take advantage of its notable religious, archaeological and environmental attractions. Al-Sisi’s directions came during the inauguration of the Al-Asmarat 3 residential complex in the Moqattam district of Cairo earlier this month.

Moreover, Madbouly instructed for the implementation of a comprehensive plan to develop the St Catherine International Airport into a 24-hour functioning airport.

The Prime Minister also called on the Ministry of Communication and Information Technology to improve mobile phone network in the area around the airport and its road.

Madbouly emphasised that developing the St Catherine International Airport will boost tourism in the city. This is particularly notable as it enjoys many advantages that qualify it as a significant destination for tourists looking to enjoy nature and spirituality.

Saint Catherine has been a popular destination for tourists and visitors inside and outside Egypt due to its historical, spiritual and cultural value. The Orthodox Monastery of St Catherine is among the sites listed on UNESCO’s World Heritage List.