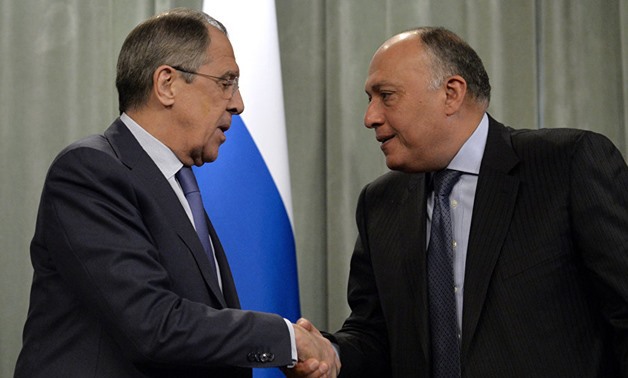 Egypt’s Foreign Minister Sameh Shoukry and his Russian counterpart Sergey Lavrov discussed, in a phone call on Tuesday, the Libyan crisis and the situation in the Middle East and North Africa.

During the phone conversation, Shoukry asserted the need for a ceasefire in Libya, to open up the way for political negotiations. He renewed Egypt’s rejection of any foreign interference in Libya, whilst asserting the need to firmly confront the deployment of foreign mercenaries from Syria in Libya.

Both ministers confirmed that the only way to settle the Libyan situation is via talks “involving all warring sides as part of the implementation of the Berlin Conference decisions endorsed by UN Security Council Resolution 2510 to reach a political and sustainable end for the crisis”.

The ministers also emphasised the importance of June’s Cairo Declaration to promote “the key principles of the Berlin process with an aim of organising an inclusive intra-Libyan dialogue on ways to build the post-conflict order in Libya on the basis of balance of interests of the country’s three historic regions.”

The phone call came a day after Egypt’s parliament unanimously approved sending the country’s armed forces on outside mission “to protect the national security in the western strategic front against criminal militias and terrorists.”

The decision came amid growing military mobilisation around the northern Libyan city of Sirte in the past few days, as Turkey prepares a possible military operation in the city.

Earlier on Monday, Egypt’s President Abdel Fattah Al-Sisi discussed, in a phone call with his US counterpart, Donald Trump, the Libyan crisis developments. During the conversation, Al-Sisi asserted the need to halt illegal and illegitimate foreign interference in its neighbouring country.

Egypt, the UAE, and Russia back the Libyan Arab Armed Forces (LAAF) headed by Commander Khalifa Haftar, the rival of the Government of National Accord (GNA). The GNA is receiving increasing support from Turkey, which has provided it with drones and air defence systems, weapons, as well as thousands of Syrian mercenaries.

Belhiq said that such decision came in response to calls made by Libyan Parliament Speaker Aguila Saleh and Libyan tribes for Egyptian support to counter the threats to the two countries’ national security.

The Egyptian troop deployment would also deter Turkey’s foreign ambitions in Libya and its support of militias and mercenaries.

Meanwhile, Libyan MPs Issa Al-Uraibi and Ziad Deghaim hailed Egypt’s stance in support of Libya and against the dangers that threaten the country.

Also, Egyptian MP and Director of the Middle East Forum for Strategic Studies, Samir Ghattas, told Daily News Egypt that he believes the Egyptian parliament’s unanimous vote is part of the country’s strategy to deter militias and mercenaries and not a move for war.

“I believe the parliament’s decision aims to legitimate measures the military would take if needed, but so far, I do not believe there is a motive for elements of the Armed Forces to be deployed in outside mission,” Ghattas said.

Ghattas described the move as “unprecedented” in modern history, saying that it has never happened before “that an Egyptian president asked the parliament for authorisation to send military elements abroad.”

He noted that the parliamentary decision, which comes under the provisions of Article 152 of Egypt’s 2014 Constitution, is due to the country’s leadership and army seeing real threats, especially around the western borders.

“This is a conditional authorisation in one direction, which is the western strategic front. It is also determined to fight mercenaries and militias,” he noted. “The decision also stipulates those elements and not all the military will take part in these missions and will return when ended.”

Ghattas pointed out that the National Defence Council’s letter has not mentioned the GNA or Turkey “to avoid entering in a conflict with Turkey or the GNA, which is an internationally recognised government.”

Moreover, he noted that Al-Sisi has asserted several times that Libya’s Sirte-Jafra line is a line of peace not of war.

Earlier in January, Sirte was captured by the LAAF from the control of militias allied to the GNA, since the Islamic State militants were expelled in 2016.

Sirte is over 1,000km from Egypt’s western borders, while the Jafra Airbase, one of Libya’s biggest bases, is located 300km south of Sirte.

Egypt seeks to protect its western borders and its national security from mercenaries and militias, as the threats of terrorist and militant groups are increasing.

Thanks to Turkish support, forces allied to the GNA seized, in May, the key military base Al-Watiya airbase south of Tripoli from the LAAF. In June, the internationally recognised GNA took control of the capital’s airport and Tarhuna city. With such gains, the GNA now controls west Libya.