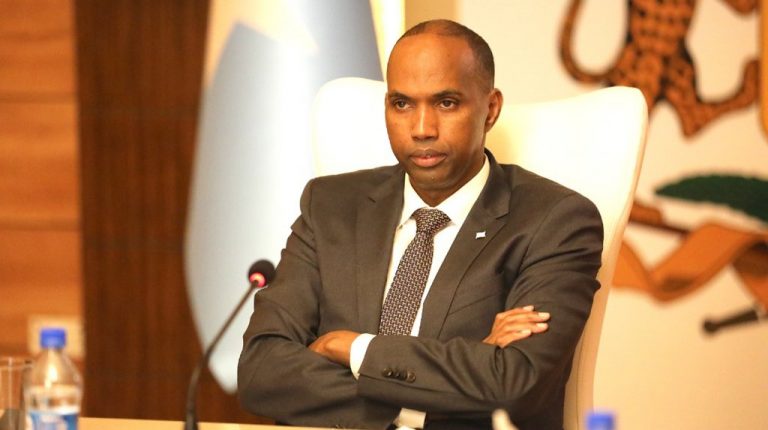 Mursal called on President Mohamed Farmajo to appoint a new PM who can lead the country to hold universal suffrage elections in 2020-2021.

The lawmakers blamed the government for failing to maintain security and conduct timely “one man, one vote” elections as stipulated in the constitution.

The parliament also accused the government of failure to complete federalism, make decisions on the status of Mogadishu, failure to hold a referendum on constitution and failure to implement political parties’ system.

According to the speaker, having 170 legislators supporting the no-confidence motion means that both pro-government and the opposition lawmakers teamed up to oust the prime minister.

The lawmakers have been debating the no-confidence motion against the prime minister since Friday, ahead of its tabling in the parliament on Saturday.

Abukar Islow, an internal security minister who is open to the lawmakers supporting Khaire, termed the move unconstitutional.
Islow said the no-confidence motion is linked to Khaire’s last week’s position that elections will not be delayed and take place on schedule.

Islow accused the speaker behind the no-confidence motion and accused him of plotting a two-year term extension.

Khaire last week warned that any extension to the government’s mandate will plunge the country into political, security and constitutional crisis and assured the public the country will go to the polls as planned. Khaire who spoke after chairing the weekly cabinet meeting said the term of the current administration will not be extended, saying the polls must take place as scheduled.

Meanwhile, President Mohamed Abdullahi Farmajo has accepted the parliament’s vote to remove Khaire from office.
Farmajo who said that a dispute now between the legislature and the executive could risk erode all the political and economic gains made so far decided to accept the parliament’s decision.

“The rift between the government and the legislature is undermining the progress that has been made, and to that end, I have decided to consider the voice of the House of Representatives as the foundation of our nationhood,” he said in a statement.
Farmajo said he will immediately appoint a new PM who will form a government that will lead the country through this transitional period and strengthens service delivery.

He thanked Khaire for working so closely with him over the years and for his service to the nation.
The Horn of African nation was due to hold parliamentary elections in October while presidential polls are scheduled to take place in February 2021.

But with ongoing consultations on the elections and the amendments to the constitution, it has not been established whether the scheduled elections will be delayed or not.