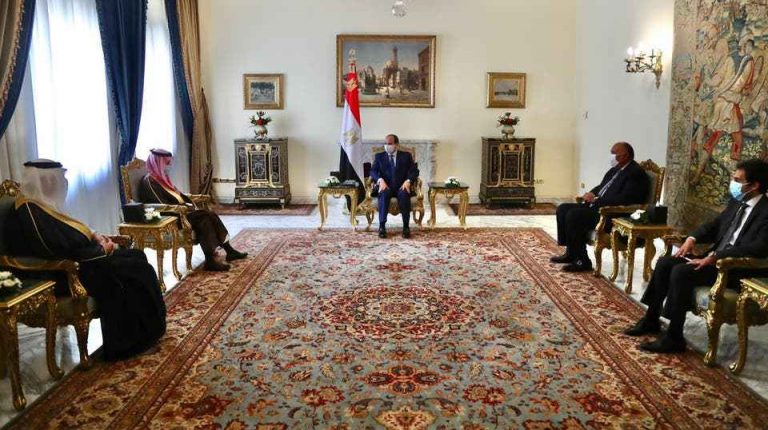 President Abdel Fattah Al-Sisi met, on Monday, with Saudi Arabia’s Foreign Minister Faisal bin Farhan Al-Saud in Cairo, during the latter’s one-day visit to Egypt.  Al-Sisi said that Egypt seeks to undermine external interferences that are currently in Libya and combat terrorist groups there. He stressed that Egypt aims to prevent Libya from becoming a base for terrorism that threatens Arab and African security.

The Egyptian president told Al-Saud that joining efforts and unifying stances are an effective way to avert the external dangers to Egypt’s neighbouring country. Al-Sisi also emphasised Egypt’s keenness to enhance all forms of coordination with Saudi Arabia.

Earlier in the day, Egypt’s Foreign Minister Sameh Shoukry held talks with his Saudi counterpart on regional and international developments. The discussions, which were followed by a press conference, also focused on enhancing cooperation between Egypt and Saudi Arabia at various levels.

Shoukry stressed that Egypt will never accept the existence of terrorists in Libya, or any other form of infringement or violation of Libya’s borders that have been identified.

Al-Saud voiced his country’s support for the Cairo Declaration, which Egypt presented in June to encourage a resolution in its strife-torn neighbour. He also stressed Riyadh’s support for keeping Libya safe from foreign interference, and its backing of any efforts that aim at maintaining Egypt’s national security.

In June, Saudi Arabia voiced its support of Egypt’s right to protect its western borders with Libya from terrorism.