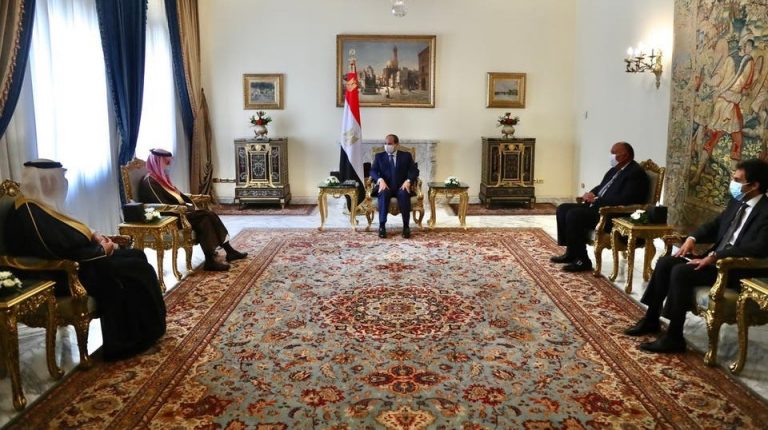 Egypt aims to combat violence and extremist groups, whilst preventing Libya from becoming a base for terrorism that threatens Arab national and African security, a presidency statement quoted President Abdel Fattah Al-Sisi as saying.

During the meeting, the Egyptian president and Al-Saud discussed recent regional updates especially in Libya, Yemen, Syria and Iraq. They agreed that political solutions are the bases on which to settle the crises in these countries.

Al-Sisi stressed Egypt’s stance regarding the crisis in Libya, adding that Egypt aims to deter external interference in the war-torn country. He added that Egypt will also take the steps needed to combat terrorist groups, and to restore the stability and the security of Libya.

The President also asserted that joint efforts are the most effective way of averting external dangers to Egypt’s neighbouring country, and the wider Arab region. Al-Sisi also emphasised Egypt’s keenness to enhance all forms of coordination with Saudi Arabia. Meanwhile, Al-Saud said that Saudi Arabia supports Egyptian efforts in settling regional crises, noting that Egypt will always remain a pivotal regional partner for the Kingdom.

Earlier in the day, Egypt’s Foreign Minister Sameh Shoukry held talks with his Saudi counterpart on regional and international developments. The discussions, which were followed by a press conference also focused on enhancing cooperation between Egypt and Saudi Arabia at various levels.

Shoukry stressed that Egypt will never accept the existence of terrorists in Libya, or any other form of infringement or violation of Libya’s borders that have been identified. In the meantime, Al-Saud voiced his country’s support for the Cairo Declaration, which Egypt presented in June to encourage a resolution in its strife-torn neighbour.

In June, Saudi Arabia voiced its support of Egypt’s right to protect its western borders with Libya from terrorism. Saudi Arabia’s government said, at the time, that Egypt’s security is an integral part of the Kingdom’s own security.

This followed Al-Sisi’s June warning against any advances of forces or militias from crossing the “Sirte and Jufra red-line”.

Al-Saud’s official visit came as Turkey has intensified its support of the internationally recognised Government of National Accord (GNA). This continues its deployment of hundreds of Syrian mercenaries in Libya, in preparation for a military operation to recapture the northern coastal town of Sirte.

About 16,500 Syrian mercenaries have been deployed so far by Turkey to fight in Libya, according to the Syrian Observatory for Human Rights (SOHR). There are also reports that Ankara is training Somali militants, as well as bringing in militants from Tunisia, including IS fighters, to fight with the GNA.

Egypt seeks to protect its western borders and its national security from mercenaries and militias, as the threats of terrorist and militant groups are increasing.