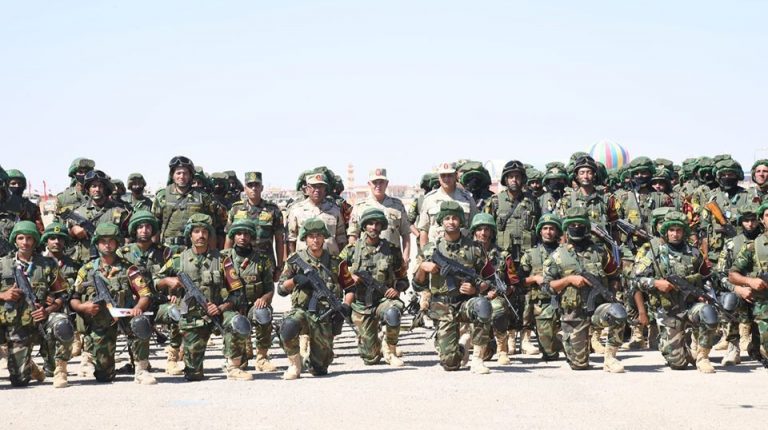 Egypt’s Chief of Staff for the Armed Forces Mohamed Farid inspected, on Monday, the combat readiness of Egyptian troops stationed in the Western Strategic Front, according to an army statement.

The inspection came as part of Egyptian security measures to protect its borders and national security on all strategic fronts.

Farid was briefed on the measures being undertaken to increase Egypt’s combat readiness. He discussed with military commanders the methods for carrying out missions and confronting sharp and rapid changes during acts of warfare.

Earlier this month, Egypt conducted military manoeuvres, which was entitled “Hasm 2020”, to confront mercenaries and threats on its western borders.

The armed forces have been on high alert for any outside missions that threaten Egypt’s borders and national security even prior to last week’s parliamentary approval for sending armed forces elements on missions outside the country’s borders.

This mandate would ensure that military forces are able to protect national security in the Western Strategic Front against criminal militias and terrorists.

The move followed repeated calls, made by Libyan Parliamentary Speaker Aguila Saleh and tribal representatives, for the Egyptian army to counter threats to both Egypt and Libya’s national security.

Egypt seeks to protect its western borders, as Turkey continues to send Syrian mercenaries to Libya. This is in preparation for a military operation to recapture the Libyan city of Sirte from the Libyan Arab Armed Forces (LAAF), headed by Commander Khalifa Haftar.

In June, Egyptian President Abdel Fattah Al-Sisi warned against any advances of forces or militias crossing into the Libyan cities of Sirte and Jufra, calling such a manoeuvre as a “red-line”.

Earlier on Sunday, the LAAF said it had destroyed three tanks belonging to militias loyal to the internationally recognised Government of National Accord (GNA). It noted that the three tanks were trying to advance west of the city of Sirte, but that they were struck by air force planes.

An LAAF spokesperson told Al-Arabiya TV channel that the LAAF has been enhancing its defences around Sirte. The spokesperson added that LAAF forces deployed in Sirte, Jufra, and the Al-Hilal oil region have also been strengthened.

The Syrian Observatory for Human Rights (SOHR) said on Sunday that Turkey has continued its policy of bringing Syrian mercenaries into Libya, in preparation for a possible battle in Sirte.

Turkey has deployed about 16,500 Syrian mercenaries so far to fight with the GNA, the SOHR said.

The GNA, which enjoys significant support from Turkey, is preparing a military operation to capture Sirte from the LAAF. The move comes after the GNA seized the key military airbase of Al-Watiya, south of Tripoli, and Tarhuna city, leading to its control over west Libya.