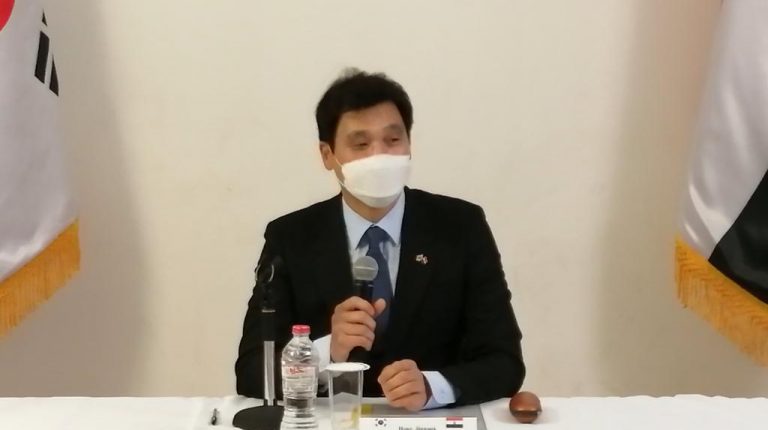 Egypt is an important partner for South Korea, and there is constant communication between the presidents of the two countries, according to the Republic of Korea’s Ambassador Hong Jin-wook.

Speaking at his first press conference, on Monday, since his appointment as ambassador, the Ambassador mentioned that his country’s main diplomatic mission is to achieve lasting  peace on the Korean Peninsula and unite the two Koreas. In order to achieve this, the Republic of Korea needs to have constant support from major players on the international scene, including Egypt.

“We have been witnessing  Egypt’s growing important and  leading role in Africa, in the Middle East, in the Mediterranean area politically, economically, and culturally,” Hong said.

He noted that Egypt’s economy is one of the fastest growing economies in the world, with the country representing both a huge market and huge human potential.

Meanwhile, Egypt also has good relations with the US, Russia and EU countries, whilst maintaining good long-term relations with North Korea. With these reasons in mind, the ambassador noted that Egypt can help the Republic of Korea in its goal of achieving lasting peace on the Korean peninsula.

The ambassador said that the summit meeting between the Egyptian and Korean presidents is foremost among his priorities in his current role. This will see the meeting of high level delegations that will lead onto important cooperation projects.

He added that he will do his utmost to develop relations between Egypt and South Korea during his time in Egypt. Part of this will be the conclusion of a free trade agreement between the two countries, and the promotion of tourism and cultural cooperation.

The ambassador said that work is currently underway on a project to support cooperation with Egypt in the field of developing artificial intelligence (AI).

Hong pointed to the cooperation to develop plasma technologies against the coronavirus, which is ongoing between a Korean company and an Egyptian company. He praised Egypt’s measures to combat the pandemic, and also praised the steps Egypt is taking to build up tourism again.