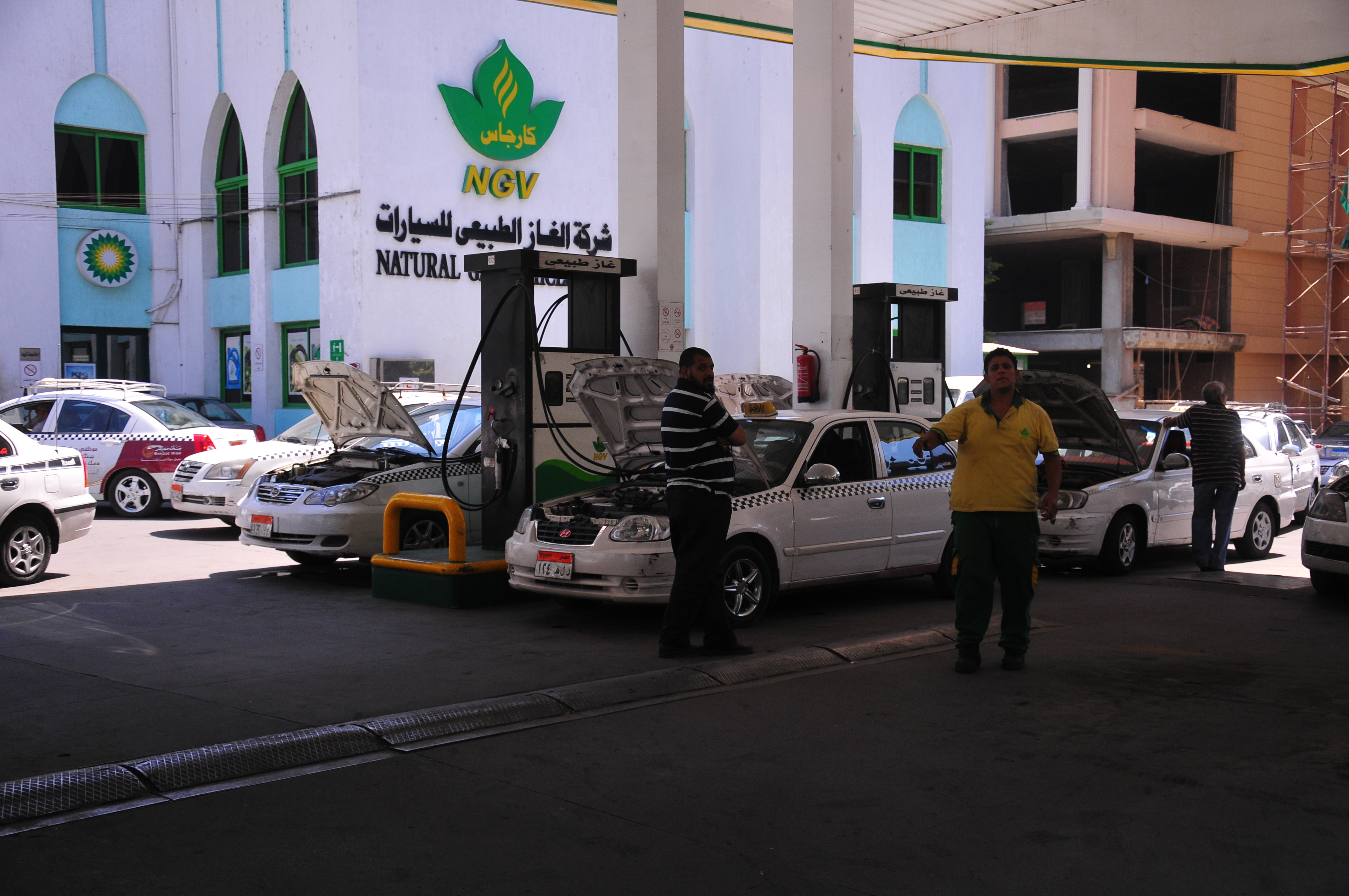 This week, Minister of Trade and Industry Nevine Gamea also announced that the initiative to replace older, less environmentally friendly vehicles is one of the national initiatives aimed at improving the living standards of Egyptian citizens.

It is designed to support national industry, whilst maximising the benefits of new gas discoveries in Egypt. Gamea added that the initiative supports the state’s directions to use gas as an alternative fuel to diesel and petrol. The move achieves economic and financial savings, as well as reducing harmful emissions of traditional fuels, providing environmentally friendly fuel choices.

The minister added that President Al-Sisi has instructed for an integrated programmeme to be designed that will convert obsolete car models, whether taxis or microbuses, to run with natural gas. The president has also directed that passenger cars will be included in the programme, especially those more than 20 years old.

Meanwhile, 240,000 microbuses are working on diesel and will be difficult to convert to natural gas fuels. For these vehicles, the government is considering providing soft loans valid for four years to ensure they are replaced with newer models that are capable of running on gas.

Gamea pointed out that a programme is in place to replace 50,000 taxis, where the vehicles have been in use for 20 years or more. The programme is set to also replace 1.3m passenger cars over two years at EGP 10bn.

Soft financing programmes will be made available for vehicle owners, in addition to expanding the construction of natural gas stations across Egypt. For this part of the programme, the Ministry of Petroleum and Mineral Resources aims to establish 366 new stations at a cost of EGP 6.7bn.

Automotive experts welcomed the new initiative and called for incentives and facilities to implement it as soon as possible.

Amr Soleiman, Chairperson of Al Amal Group for the assembly and manufacture of cars and the Egyptian agent for BYD and Lada, said the state move towards natural gas conversion is a hugely beneficial project. With the abundance of natural gas that Egypt enjoys, in addition to the low operating costs associated with gas-powered cars compared to petrol, consumers will be able to save 50% in petrol charges.

Soleiman stressed that Al-Amal has already contracted with Gastec and Car Gas to convert its vehicles to run on natural gas. He explained that it is possible to import cars with a natural gas engine, especially since many of the mother companies abroad produce gas-powered models already. Although these types are not necessarily imported by local agents, this can change, and companies can also modify cars from petrol-fuelled to natural gas.

He stressed the need to expand on construction of gas stations, to keep pace with the shift in dependence on natural gas as alternative fuel, as well as to prevent overcrowding in front of existing stations.

Soleiman also called on the state to provide the appropriate facilities and incentives and financing programmes for owners of old cars that will be scrapped. This would be similar to what occurred with the previous taxi replacement initiative in which certain cars were exempted from value-added tax (VAT) or from custom duties. This would also see the reduction of the interest on loans to be granted to citizens to this effect.

Karim Naggar, chairperson of Kayan International Trade and Egypt agent for Volkswagen, Seat, and Skoda, also welcomed the state decision to initiate the replacement of old cars. Whilst he noted that the initiative is long overdue, he also called for incentives to be granted to companies and agents to encourage the import of gas-powered models.

Naggar also called on the state to provide a package of incentives to encourage automotive companies to import natural gas models instead of petrol.

It’s not the first initiative

Gamal El-Kaliouby, Professor of Petroleum and Energy Engineering, and a board member of the Egyptian Petroleum Association, said that Egypt was the first country in the Middle East to commence with converting cars to natural gas in 1997. This took place after the Nasser Social Bank was appointed to finance the process for those who wished to convert their cars.

El-Kaliouby added that the surplus of natural gas in Egypt has encouraged the state in going down this route again, especially as international oil prices are volatile. He noted that the use of natural gas saves as much as a third on normal fuel consumption.

He explained that all global car brands produce cars with gas cylinders, including Nissan which has introduced a natural gas-powered 4-wheel drive vehicle.

He noted that the state seeks to increase natural gas stations, increasing the numbers from the current 197 to a targeted 270, as soon as possible.

El-Kaliouby pointed out that Egypt has already started importing buses that operate on natural gas, especially as the country’s primary goals are to reduce the volume of petroleum product imports. Egypt currently imports 7 million tonnes of petroleum products, including diesel, on a monthly basis, which represents 53% of the country’s import rates, followed by petrol which accounts for 43% of imports.

on the other hand, Ali Tawfik, head of the Feeding Industries Association, said that Egypt does not have enough natural gas to convert all taxis. This will, in turn, reduce the project’s economic feasibility, especially in light of the many energy-intensive industries relying on natural gas, including plastic.

“It is not normal to use natural gas to run cars while we have another effective alternative, which is electricity, especially since various countries worldwide have already turned to electricity as an alternative to fuels,” he said.

Instead, Tawfik urged state authorities to prepare a technical and economic study for converting to natural gas.

“These studies must also include a review of the parent companies supplying cars to Egypt because there are many companies that did not produce cars that operate on natural gas,” he added.

Tawfik pointed out that the few natural gas stations available across the country is a major challenge, and that the first steps to transform to natural gas begins with infrastructure. He stressed the need to import taxis that operate with natural gas, instead of converting them due to the difficulty of the conversion process and the need for special specifications that must be available.

“The process of converting microbuses to work on natural gas is a process similar to ‘cutting and pasting’, and requires precise engineering designs for the gas cylinder that supplies the engine with fuel,” Tawfik said. “These designs are reviewed and re-tested so that these cylinders are not placed in an unsafe manner, which is what is currently happening.”

He also noted that car owners often resort to placing the gas cylinder in the vehicle’s boot area, where luggage is stored, which lacks the minimum safety standards.

Tawfik stressed that Egypt has the ability to undertake the conversion process, and is well aware of and able to work according to global standards in converting cars to natural gas.

He added that the natural gas has higher octane rating (130) than that of petrol (95), as a study has confirmed that if the engine is not operating at a capacity of 70%, it should not be allowed to convert to natural gas.

Tawfik stressed the need to commence with replacing government-owned cars before applying the natural gas requirements to cars owned and run by citizen, to serve as an incentive to citizens. He stressed that Egypt does not have a car scrapping zone, and that there is a need to provide one in every governorate to extract parts for their reuse or export.

He also pointed out that the negative effect of reusing old cars has put Egypt on the list of the most polluted countries in the world. As a result, the state’s decision to replace old cars with new ones is of utmost importance.

The Ministry of Industry and Trade is preparing to launch another initiative to encourage the conversion of eligible new cars to work with sustainable fuel. Run in coordination with the Ministry of the Interior, the initiative will ensure that all new licensed cars are powered by a bi-fuel system of petrol and natural gas.

One of the most important conditions for joining this initiative is that all eligible vehicles must be locally manufactured and meet the local manufacturing standard determined by the Ministry of Trade and Industry.

The government is preparing a set of benefits and incentives for this initiative, with the Ministry of Trade and Industry coordinating with the Ministry of Finance on providing tax benefits to the final consumer. This comes in addition to the launch of a financing programme providing concessional interest through banks as well as the Micro, Small, and Medium Enterprise Development Authority (MSMEDA).

The government pointed out that there are financing programmes with soft interest available through banks that will help convert cars to work with natural gas. It has added that the conversion value of EGP 8,000 – EGP 12,000 will be paid in low instalments through the gas bill.

Last Tuesday, Minister of Finance Mohamed Maait said that there is a global trend away from diesel and petrol fuels for several reasons. In turn, the state supports the conversion of cars to natural gas, especially as Egypt has a surplus of gas whilst still importing diesel and petrol.

Egypt is only MEA country to maintain credit rating at big 3 agencies: Maait