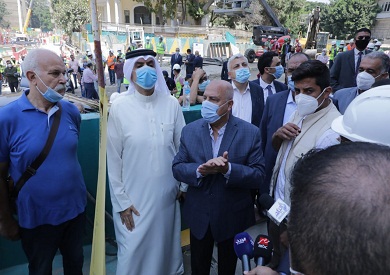 Egypt’s Minister of Transportation Kamel El-Wazir has visited a severely damaged building in Zamalek that tilted on Sunday due to nearby construction work on a Cairo Metro extension.

The minister also visited the Safa Hegazy station in Cairo Metro Line 3. He inspected soil injection works under the outer wall of the building which it shares with the adjacent Embassy of Bahrain.

Amid anger from the building residents, photos and videos were shared online showing deep cracks in the building’s walls and slight subsidence outside.

According to a statement released by the Cairo governorate, initial inspections showed that the building had suffered some damage and tilting, as well as subsidence in the garage. The neighbouring Embassy of Bahrian building has also suffered subsidence.

Immediately following the severe damage to the buildings, Cairo Governor Khaled Abdel Aal formed an engineering committee to inspect the property and demonstrate the extent of the damage. Residents of the building, who were evacuated, said they feared it might collapse.

El-Wazir explained that the committee’s recommendations stated that the full implementation of repair work will not exceed two weeks, due to the upcoming Eid Al-Adha holiday period. The Arab Contractors and Orascom companies, with their significant experience in construction and real estate development, will fully restore the safety of the area.

In televised comments late on Sunday, El-Wazir said that the building’s residents were each given EGP 30,000 to cover temporary housing until they are able to return to the building.

Zamalek residents have long warned of the effects of the Cairo Metro’s construction work on their buildings. The Cairo Metro Line 3 will run from Heliopolis to the Attaba district in Downtown Cairo, and on through Maspero to a new Zamalek stop, before heading towards the densely populated district of Imbaba on the Giza side of the River Nile.

El-Wazir emphasised that the heavy-duty machinery used in construction work on the Metro system entered the front wall of the Safa Hegazy station. The work included the creation of two to three concrete rings around the machine in front of the station to strengthen and fix the soil. He added that the machine dug from the direction of the River Nile to within 200 metres of the building’s location, though five other properties in the area have not been affected.