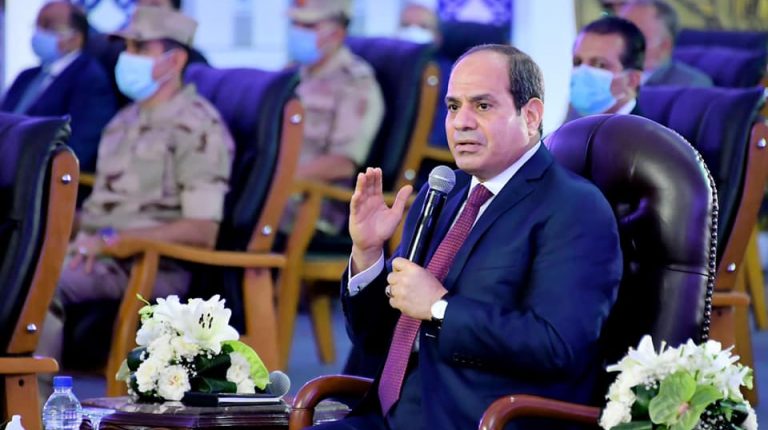 Egyptian President Abdel Fattah Al-Sisi said, on Tuesday, that Egypt is keen to deal with the Grand Ethiopian Renaissance Dam (GERD) crisis through negotiations, rather than the military route. During a speech at the inauguration of the Rubiky industrial city, Al-Sisi said that Egypt supports Ethiopia as it undertakes its development projects. The president emphasised, however, that this support would not come at the expense of Egypt’s share of River Nile water.

“There is no need to stir up public opinion in Egypt with military action,” Al-Sisi said, “We are negotiating to benefit everyone, whilst there is no harm done to us.”

The President added, “Justice relating to the water issue was proven by the Ancient Egyptian civilisation, which was founded on the waters of the River Nile.”

Al-Sisi noted that Egypt has launched an initiative to equip its agricultural land with a modern irrigation system, and that it has taken positive early steps to implement water treatment projects. The latter have come with huge investments amounting to EGP 1trn, and will take place alongside improvements to the water capacity of 120,000 canals, which would reduce water evaporation.

The President also said that the government has an organised plan for Egypt that will see work continue until 2037. He called on Egyptians to participate in and preserve these projects, rather than build on them.

Meanwhile, Al-Sisi said that the state has an ambitious plan to develop the country’s textile industry, and is currently working to restore the industrial city of Mahalla to its former position as a major centre for the textile industry.

“New factories will be established in Mahalla, and land assets are being used to pay off the factories’ debts, which are estimated at EGP 50bn within two years,” he said, adding, “We aim to bring exports to $100bn in four years.”

The Rubiky industrial complex is located on an area of 430 feddan between the Cairo-Ismailia and Cairo-Suez roads. It is set to be linked up with Egypt’s Red and Mediterranean seaports through new roads, with the first phase of the project to include six textile factories.