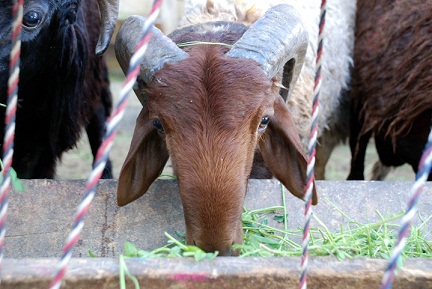 Cattle and sheep seasonal marketplaces are held almost everywhere in Egypt, mostly in the streets outside butcheries and barns, ahead of the Eid Al-Adha holiday, where Egyptians buy sacrificial animals to slaughter and donate part of their meat to the poor as an Islamic ritual.

However, sales at livestock markets, butcheries and beef stores have notably declined this year due to economic slowdown over the ongoing COVID-19 pandemic, which has registered nearly 93,000 cases in the country so far, including 4,691 deaths and about 36,000 recoveries.

A few days before the Eid Al-Adha holiday that starts on Friday, Kamel, a butcher and cattle trader, displayed tens of cows, buffalos, sheep and goats outside his shop, which carries his name, in Ain Shams district of the capital Cairo.
“Meat prices are lower than last year, yet the sales are lower as well due to the difficult economic conditions caused by the novel coronavirus,” the trader told Xinhua outside his store.

Meanwhile, in Boulak el-Dakrour neighborhood in nearby Giza province, Sobhy al-Raqabawy, a veteran livestock trader who inherited the profession from his father and grandfather, lamented that his customers declined by half this season.

Al-Raqabawy doesn’t attribute the recession to COVID-19 alone, but he believes that the price hikes are to blame too.
“This season, a customer who used to buy a calf buys a ram, and the one who used to buy a kilogram of beef buys half a kilogram,” the trader told Xinhua in the middle of his cattle and sheep displayed for sale outside his barn.

“The reason is that the prices of commodities and services are hiking while people’s incomes remain the same,” he added.
The partial lockdown and flight suspension Egypt has imposed for about three months to curb the spread of coronavirus hit the country’s tourism revenues, a pillar of national income, and affected the financial conditions of the state and the citizens.
In an attempt to overcome the economic hardship, the government has recently resumed international flights to refresh tourism, lifted the partial nighttime curfew it has been imposing and allowed cautious and gradual reopening of businesses and economic activities.

But business life in Egypt isn’t yet as dynamic as it has been before the pandemic, and the incomes of citizens are still affected, which in turn has affected their traditional purchases of sacrificial animals or meat ahead of the major Islamic holiday.

Duaa Fayez, a housewife in her early 40s, said that her husband, who works as a mechanic, bought only three kilograms of meat for the holiday this year, instead of five kilograms as he used to do every year.

As for Shaaban Taha, a tailor and owner of a small clothing factory in Giza, he blames greedy merchants for the rising prices of commodities in general, arguing that they make use of the crisis to achieve personal gains.

“My business has been affected like everyone else because of the coronavirus, and so my purchase of meat for the Eid Al-Adha has been affected too. I believe that greedy merchants are more to blame than the pandemic itself,” the man told Xinhua.

Besides its attempts to monitor the market and control price manipulation, the Egyptian government has for a few years been offering meat and other foodstuff at affordable prices, selling them in special stalls and mobile grocery shops in main streets and public squares.

Egypt used to import over 60 percent of beef to meet the needs of the local market, but now the gap decreased to around 40 percent, according to Tarek Suleiman, head of Livestock and Poultry Development Sector at the Ministry of Agriculture.

Suleiman noted that this season, the ministry sells livestock at competitive prices and offers government slaughterhouses for free so that citizens can get their sacrificial animals checked and safely slaughtered amid anti-coronavirus measures.

“We have also formed committees of vets to check the healthiness of sacrificial animals offered for sale nationwide, whether those belonging to the ministry or the private sector. We are responsible for the safety of all livestock in Egypt,” the official told Xinhua.