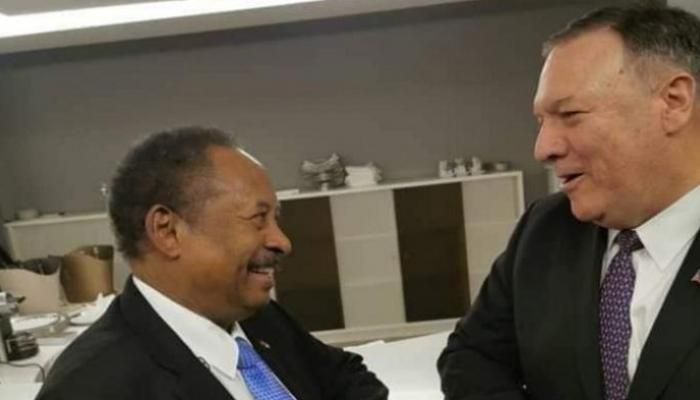 Sudan welcomed, on Saturday, recent statements by US Secretary of State Mike Pompeo that it will be removed from the list of states sponsoring terrorism. The country’s inclusion on the list represented one of the biggest challenges facing its transitional government.

Speaking before the Congressional Foreign Affairs Committee on Thursday, Pompeo said that the US administration is keen to remove Sudan from the list, and expressed US support for Sudan’s democratic transition.

In a statement, the Sudanese Cabinet praised for the committee’s role in Congress. The Cabinet also praised the role of Senator Chris Coons, who urged the US Administration to provide support for Sudan’s civilian government and push forward with bilateral relations between the two countries.

Sudan’s Cabinet also expressed its readiness to continue to work with its US counterpart in removing its name from the list of countries that sponsor terrorism. The move would also see the two countries entering into a partnership that benefits both countries.

Pompeo called on the US Senate to speed up a settlement that would pave the way for removing Sudan from the list. The US had included the African country on the list in 1997, as punishment for hosting the now-ousted regime of former president Omar Al-Bashir.

The US Secretary of State also said that he sees an historic opportunity for Sudan’s civil transformation, and sees its removal from the list of state sponsors of terrorism as part of the process.

His call comes less than a week after Sudanese Prime Minister Abdullah Hamdouk announced that his government had reached a settlement regarding compensation for the 1998 bombings of US embassies in Nairobi and Dar El Salaam. Hamdouk noted that his government had put considerable efforts into reducing the amount of compensation required from Sudan, a figure that had originally stood at $11bn, but now stands at $400m.

He noted that it should be borne in mind that the Sudanese people have no guilt in the actions committed by the Al-Bashir regime.

Pompeo’s call resonated strongly among Senators on Capitol, including Democrat Senator Chris Coons who is known for his interest in Africa. Coons had urged Pompeo to do everything in his power to support the Hamdouk government and seize the opportunity “to build a new democratic partner in the region”.

Since the fall of the ousted regime Omar Al-Bashir in April 2019 and Hamdouk’s taking office in September of the same year, Sudanese diplomacy has made great efforts to push towards the countr’s removal from the list. Those efforts collided with the obstacle of compensation requested by the US’ judiciary for the victims of the 1998 US embassy bombings.

Pompeo told the Senate Foreign Relations Committee that the settlement legislation should be presented to Congress “in the very short term”.

In the early 1990s, the Al-Bashir regime hosted Al-Qaeda leader Osama bin Laden and a number of extremists who have been accused of committing a number of terrorist acts that have killed dozens in different countries.