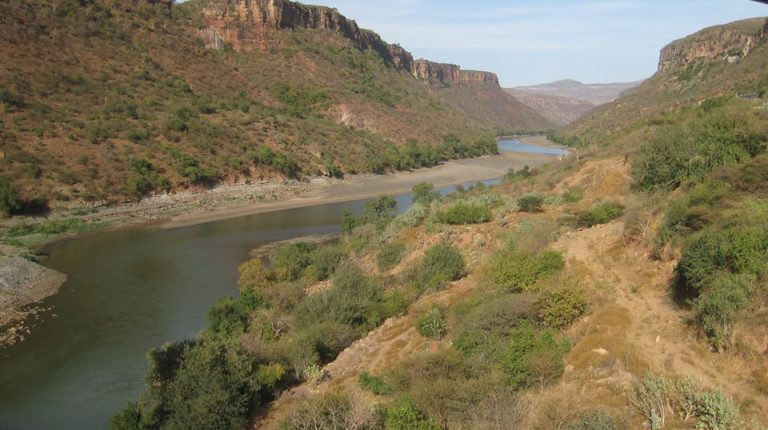 In the fifth century BCE, the Greek historian Herodotus described Egypt as a “gift of the Nile”. He was, in fact, referring to the Nile Delta, created thanks to the alluvial accumulations at the expense of the retreating sea coast. Geographers, over many centuries, interpreted Herodotus’ phrase as reflecting Egypt’s dependence on the Nile, without which, like all African neighbours and in the Arabian Peninsula, Egypt would have been just a part of the hyper-arid desert that neither host a civilisation nor urban settlements.

The gift of the Blue Nile

In modern times, and with the precise estimation of the Nile water budget since the beginning of the 20th Century, geographers have modified the phrase of Herodotus to become “Egypt is the gift of the Blue Nile. This takes into account that approximately 85% of the water arriving to Egypt comes from the Blue Nile.

The White Nile contributes to the limited remaining part. It goes without saying that Egypt does not contribute a drop of water to the Nile water budget, due to the arid climate change that its environment has been undergoing in the past few thousand years.

Egypt, affected by the Blue Nile, not only depends on the amount of water, but rather on what this water carries, including mud sediments that created the soil upon which agriculture was based.

If we go back to etymology, the Blue Nile is a description of dark turbid water that carries heavy, dark deposits of volcanic rocks in the Abyssinian Plateau. Some people think of black-coloured objects as blue, due to the similarity in the darkness of the heavy colour.

As for the White Nile that passes through Sudan, it is described as such because it carries water free of any sediment after it was lost in the swamps of southern Sudan. Plant colonies have kept all the sediments, so its water appeared “white” with no mud in it.

The White Nile is the son of the “equatorial sources” in contrast to the Blue Nile, which is embraced by the “Abyssinian sources”. 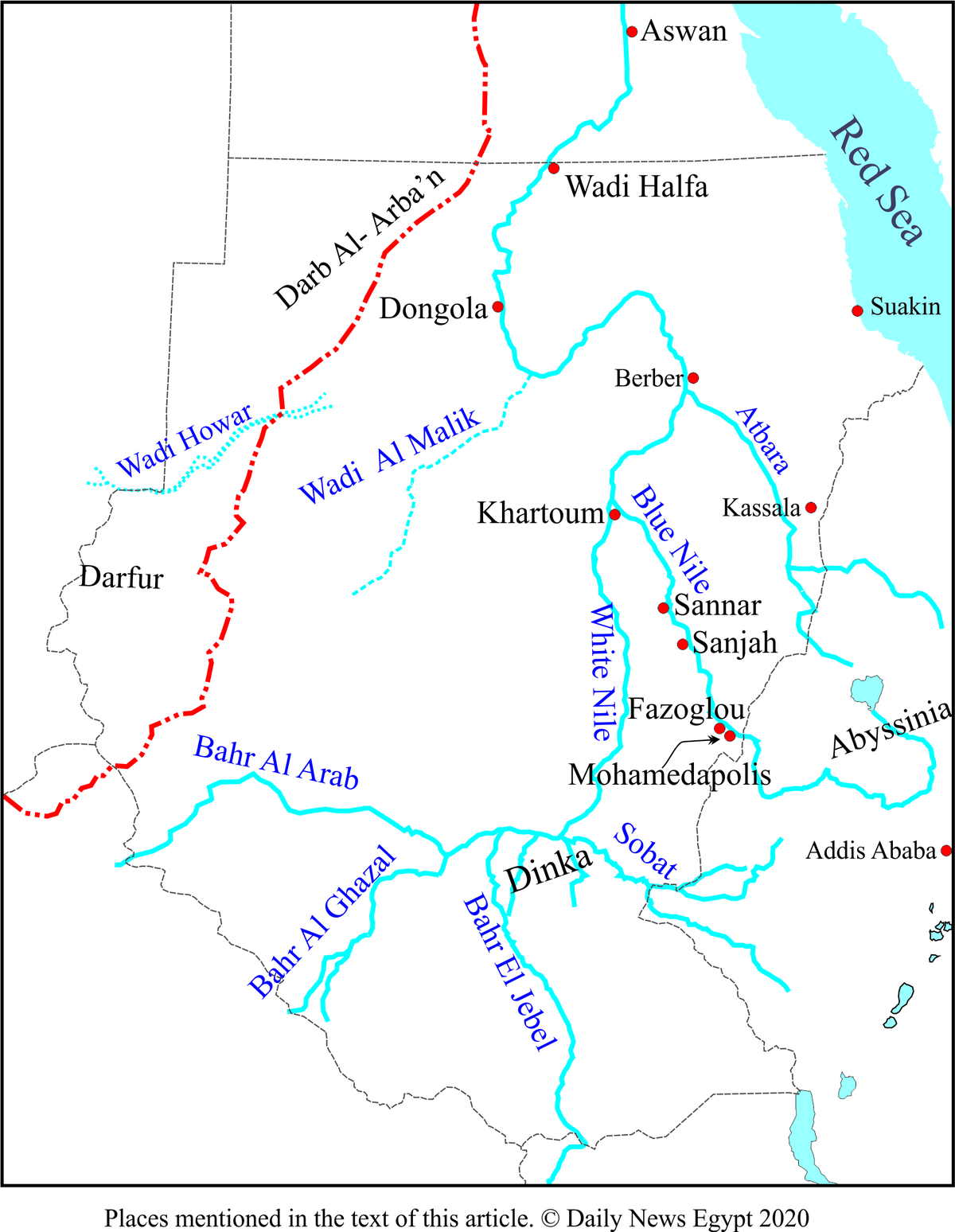 Since the third century BCE, the Greco-Roman history of Egypt did nothing more than imitate its predecessors from the Ancient Egyptian era. It interpreted the same steps, even though the focus had moved more towards Red Sea ports in East Africa and southern Arabia, in order to reach India’s goods and trade.

Later, during the Arab conquest of Egypt, we have no important historical writings that give attention to the Nile Basin, except that mention of the Nubian lands reaching its southern limits at the confluence of the White and Blue Niles. During the Mamluk and Ottoman eras, interest in the river basin and its sources was not much appreciated until the 19th Century, which can be considered the golden age of Egyptian interest in the Nile.

Bigger than water and more than gold!

The 19th Century, and specifically since the rule of Muhammad Ali Pasha, is the time Egypt reached its highest levels interest in the source of the River Nile, based on modern scientific foundations and careful mapping.

The truth is that the amount of River Nile water has not occupied anyone in Egypt throughout history, except for the reasons of natural flooding, and no one was thinking about the possibility of “blocking the Nile flow” from the source.

Muhammad Ali was in urgent need of gold to finance his major projects and modernise the army. He sent European mineral experts to the southern part of Egypt’s Eastern Desert to find gold, but they did not succeed in that. He then sent military expeditions and campaigns to obtain gold from Abyssinia, specifically from the Blue Nile Basin.

Another reason for the campaigns to find the River Nile source is to obtain strong soldiers from that region with which to supply the Egyptian army. This came after the heavy losses it faced during the campaign against the Wahhabis in the Arabian Peninsula.

Muhammad Ali’s interest in the Blue Nile began in the 1820s when he sent his son Ismail as the head of a great campaign that included 5,000 Egyptian soldiers. It travelled through Aswan, to the old Nubian capital Dongola, before crossing Korti, Berber, and Shendy all the way to Halfaya (presently north of Khartoum).

When the campaign reached the point where the Blue and White rivers met, scientists decided that the main course of the Nile must be the White Nile. The Blue Nile tributary is only an additional tributary to the main branch, and this information was closer to the level of geographical detection at the time of Muhammad Ali, which is both a true and a false discovery at the same time.

The Blue Nile is just one tributary compared to the dozens of other tributaries that make up the White Nile, but the volume of water from the Blue Nile is much bigger. 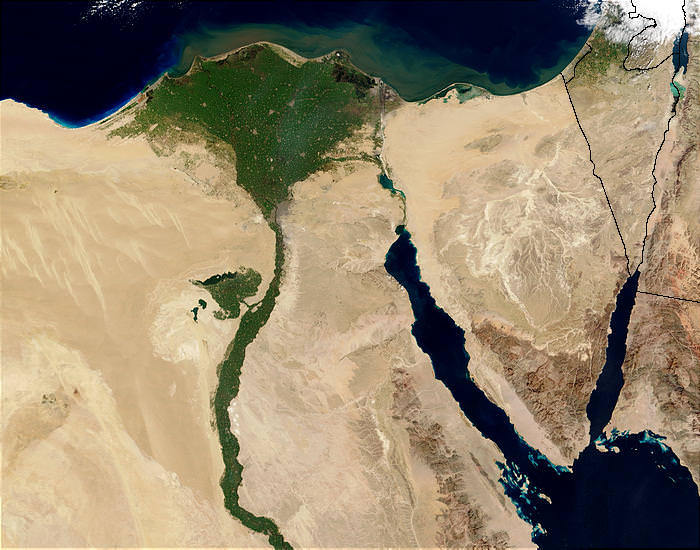 However, military geography was still more concerned with the largest areas of land, branches, tribes, and tributaries, than the size of the water budget. Consequently, the Blue Nile did not matter in the same way to 19th Century Egypt as it does today. All its importance came in an ambitious project to search for gold, especially in the borderlands around the Sannar, Sinjah, and Fazoglou regions.

Then in 1821, Muhammad Ali repeated the campaigns along the Blue Nile, and sent his son Ibrahim Pasha who had achieved wide fame in the Arabian Peninsula campaign of 1811-1818.

Ibrahim Pasha divided his army into two divisions: a division headed by his brother Ismail, which would penetrate the Blue River to reach the famous capital of the Fazoglou Kingdom; and the second division, which fell under the leadership of Ibrahim himself, to penetrate the White Nile to reach Dinka.

Ambitions and legends in Kordofan and Darfur

Parallel to the Blue Nile campaign, Egyptian efforts were directed to western Sudan. At the time, it was believed that the western headwaters of the River Nile to the south of Kordofan connected it to the Niger River. Ibrahim Pasha’s campaign prepared for this. At the same time, the campaign was attracting soldiers from Kordofan in the hope of crawling, if necessary, beyond Bornu in modern day Chad.

The aspirations of the Nile campaign were extreme. The plan was to complete the march from the White Nile to Darfur, then Bonru, then return north to “Tripoli-of-the-West” (Libya in modern day). The campaign was then brought to a close before heading back to Egypt. This means that the campaign had scientific/exploratory/geopolitical goals in the northeast of the African continent, based on an ancient idea known by historians and geographers throughout history, which is the geographical integration of the Nile Basin. The campaign was not only satisfied with having explored the famous “blue” and “white” tributaries of the Nile, but also extended to lesser-known tributaries such as Atbara. It also looked at other rivers that do not flow into the Nile Basin, but which instead feed into the Red Sea in eastern Sudan, such as Qash Creek. Those countries from Kassala to Suakin were known as the “Taka” countries, which fell under Egypt’s  sovereignty in 1840.

In order to discover the River Nile’s wealth, Egypt established Khartoum in 1823 at the meeting point of the Blue and White Nile, making it the capital of Sudan. Before, it was a group of small huts near a historic cemetery.

The establishment of Khartoum was intended to be a focal point for launching into the Blue Nile, especially in Sinnar and Fazoglou. This was after previous military sites in Sinnar proved damaging to the health of the soldiers, with deadly epidemics of dysentery spreading among them.

At the end of 1839 and the beginning of 1840, Muhammad Ali himself travelled to Sudan to supervise the extraction of gold. He arrived at Dongola, from where he went onto Khartoum to call for the abolition of slavery. He then arrived to Fazoglou and established an Egyptian centre for the exploration of the area. He gave the area a new name “Mohamedapolis”, meaning the city of Mohamed Ali.

Explorers, however, failed to find gold, leaving Muhammad Ali angry at the European and Egyptian experts accompanying him. He returned to Cairo under a cloud of anger at the age of 71. Soon, the name of the new city was forgotten and it no longer occupies a place on the map.

Although Muhammad Ali returned, the campaign to explore the area continued and reached new borderlands in the south. In 1841, it reached the headwaters of the Sobat River, with many important maps being created which later European records would rely on.

A new world in equatorial sources

After the deaths of Muhammad Ali and his son Ibrahim Pasha, Khedive Abbas did not, during his short reign between 1848 and 1854, give attention to the River Nile. However, the period that followed during Khedive Said’s rule (1854 to 1863) witnessed attention to Sudan and the Nile River Basin, as he sought to imitate Muhammad Ali.

He travelled to Khartoum in 1857 and established a centre on the Sobat River in the far south to supervise the abolition of the slave trade.

He also permitted German explorers to study eastern Sudan, allowing them to travel to Kordofan and south to Bahr El Ghazal, as well as to the sources of the river from southern Sudan.

We can say that the era of Ismail (1863-1879) is the era of the most interest in the Nile Basin and its geopolitical boundaries in the full sense of the word. After Ismail signed understandings with the Ottoman Empire in 1870 to extend Egypt’s sovereignty over both Massawa in Eritrea and the Tokar region and Sawakin in eastern Sudan, he assigned Sir Samuel Baker to a great expedition to the equatorial sources of the river.

The Egyptian treasury spent FR 20m on Samuel Baker’s campaign, which ran from February 1870  to August 1874. At the confluence of the Sobat River with the White Nile, Baker created a station to prevent the slave trade, which he called “Teufikieh” (after the name of the oldest son of Khedive Ismail, who would later become Khedive of Egypt in 1879.

Baker kept travelling until he arrived at Gondokro on 21 April 1871. On 26 May, he officially announced that the surrounding regions were under the rule of Egypt. He renamed Gondokro and called it Ismailia, after the name of the Khedive.

Baker’s work was a breakthrough for Egypt, but with no more than apparently nominal sovereignty in the equatorial area. When Khedive Ismail wanted to establish an actual sovereignty over this area, a new stage of Egyptian interest in the equatorial sources of the Nile River began, which we will discuss in detail in the next article.

Read part II of the series “Historical Maps of Egypt (Part II): Circle of Scholars Around the Pasha”