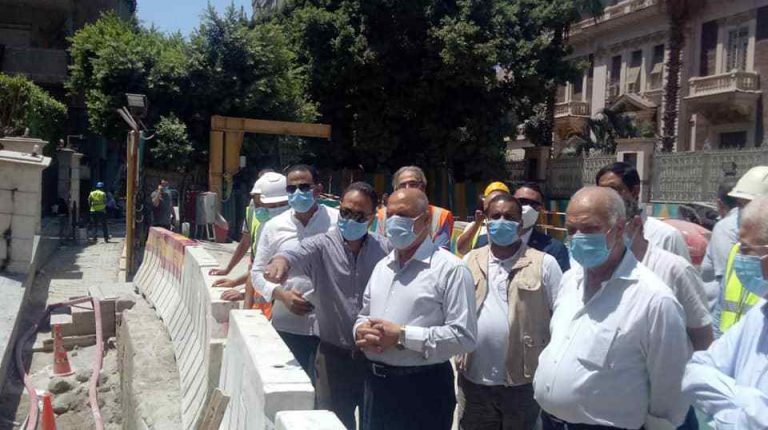 Egypt’s Minister of Transport Kamel El-Wazir inspected, on Monday, the Safaa Hegazi metro station, which is being constructed in Zamalek district, as part of the third stage of the Cairo Metro’s Line 3.

The minister also followed up on the ongoing rehabilitation work to the Sharbatly building affected by the metro project in the neighbourhood, according to a ministry statement.

Soil injection works under the affected residential building and the perimeter fence, as well as a room attached to the neighbouring Embassy of Bahrain, have been completed, with other rehabilitation works continuing.

In another tour, El-Wazir inspected the metro stations that have been completed in the fourth stage of the Cairo Metro’s Line 3, in preparation for their inauguration during the upcoming period.

The Adly Mansour metro station, which is set to be a transitional station including a commercial area covering 15 feddan, was among those stations the minister visited, according to the ministry.

Last week, Residents of Zamalek’s Sharbatly building  were evacuated after they reported that the building had begun to tilt. The residents said the damage has been caused by metro construction works that are being carried out in the neighbourhood.

Cairo Governor Khaled Abdel Aal formed an engineering committee last week that examined the property, and demonstrated the extent of the damage.

Moreover, El-Wazir announced that the building’s residents were each given EGP 30,000 to cover temporary housing until they are able to return to the building.

The Cairo Metro’s ongoing construction works include a new 4km line extending from Attaba to the Kit Kat neighbourhood. The line runs through the Zamalek area, and is set to be inaugurated in December 2021.