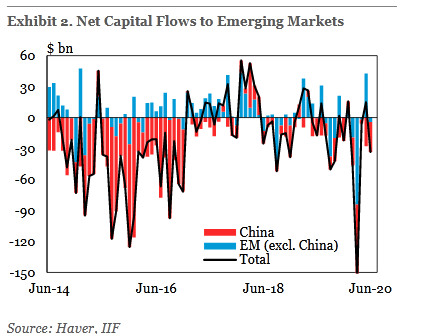 The Institute of International Finance (IIF) estimates that emerging markets (EMs) securities attracted around $15.1bn in July, down from the $29.2bn recorded in June.

The IIF explained that negative sentiment regarding these markets approached extreme levels during March. Despite the negative outlook, it did, however, set the stage for a period of stabilisation and further two-way discussions on risks and opportunities in the EM space.

“Emerging-market stocks and debt posted a second month of positive flows, with investor appetite underpinned by a falling dollar and an accommodating Federal Reserve,” the IFF revealed. “The advance was limited by concern about resurgence in virus cases and the dim global outlook for growth.”

The institute noted that sovereign issuers from most EM regions continue to leverage lower costs and favourable maturities.

“We understand this shift in sentiment as healthy, reflecting deeply discounted valuations in many places,” the IIF said. “We are starting to see some of the more beaten down parts of the capital markets play catch-up, and there is a great deal of focus on how sustained this trend will be and how broadly it is felt across EM.”

It pointed out that the current recovery has been partially driven by broad weakness in the US dollar, although expectations of growth differentials remain a concern.

The IIF continued that the sentiment metrics show a rebound in outlook, with hard data still lagging behind.

Overall, the IIF said that the shape of recovery will be dependent on the EM complex’s capacity to put in place efficient policies that catalyse a recovery. Moving forward, it sees investors becoming more discerning regarding investment decisions towards EMs.

Debt flows continued their recovery, reaching $13.2bn. On the equity side, inflows to EM equities, excluding China, amounted to $2.3bn, while flows to China suffered from increased tensions between Washington and Beijing, resulting in an outflow of $0.4bn.

Regionally, the IIF said that the emerging markets that have benefited the most were located in Asia, registering inflows of $9.9bn. These were followed by EMs in Europe that saw inflows of $2.0bn.