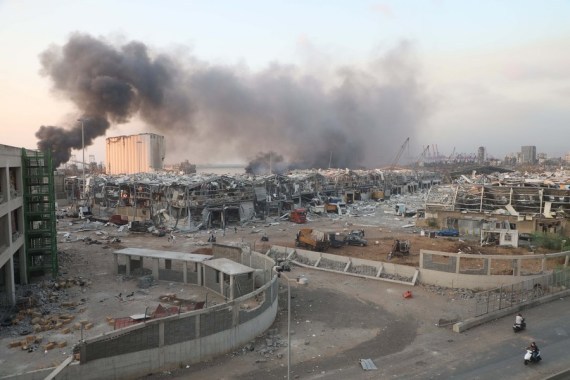 A huge blast has hit the port area of the Lebanese capital Beirut, on Tuesday, near the residence of the country’s former Prime Minister Saad Al-Hariri, leaving scores of casualties and spreading horror among residents.

According to the Lebanese Ministry of Health, more than 73 people were killed, 3700 others injured.

Photos of the explosion went viral on social media, showing the extensive damages that caused by the blast, while people running form the explosion with their relatives and children injured and bloodstained.

The Lebanese army has been deployed immediately to the streets of the capital following the blast that occurred at warehouses storing explosives, Lebanon’s official National News Agency (NNA) reported.

The government has declared Wednesday a day of national mourning, and President Michel Aoun called for an urgent meeting in Baabda Palace. Lebanon’s Prime Minister Hassan Diab vows that all those responsible for today’s blasts in Beirut will be held accountable.

Initial reports suggested that there had been more than one explosion, with one hitting the port and the other occurring inside the city, local media reported.

Lebanese Red Cross official, Georges Kettaneh, said that there were hundreds of dead and wounded, but did not provide exact figures.

Earlier, the Lebanese Red Cross said it had treated over 100 wounded, with dozens more injured transported to the hospitals. It added that more than 300 medical teams have been dispatched to the blast area.

Meanwhile, Lebanon’s Minister of Health Hamad Hassan said that “a large number of people have been injured in the explosion”, with the explosion itself having caused huge damage.

Beirut Governor Marwan Abboud said, “The explosion was similar to the Hiroshima and Nagasaki bombings.”

General Director of Lebanese General Security, Major General Abbas Ibrahim, said that the massive and devastating blast occurred at a depot in the port where highly explosive materials had been stored, according to local media. He dismissed the theory that the explosion had been caused by “an Israel rocket.”

Pentagon Spokesperson, Commander Jessica McNulty said, “We are aware of the explosion [in Beirut], but it is too soon to comment on potential American citizen involvement.”

Egypt’s President Abdel Fattah Al-Sisi expressed his condolences and sincere sympathy to the Lebanese government and people “over the painful explosion” that hit the capital, wishing all injured a speedy recovery.

Footage broadcast on local television showed thick smoke and severe damage to scores of houses, shops, trucks, and vehicles in the area of the explosion, as windows shattered and balconies collapsed. Al-Hariri’s residence was among the affected buildings, but he is reportedly uninjured.

The office of the Daily Star Lebanon newspaper was among buildings that sustained damage from the explosion, according to the newspaper reporter Ghada Alsharif, who shared a video on her Twitter account.

“We think it was a missile from a jet,” Allen believes, adding that all the buildings in her block have been destroyed.

The explosion came as the United Nations-backed court is expected to issue its verdict on Friday in the case of the assassination of former Prime Minister Rafik Hariri. The late leader was killed in a car bombing in 2005, with the four defendants in the case suspected of being Hezbollah movement members.