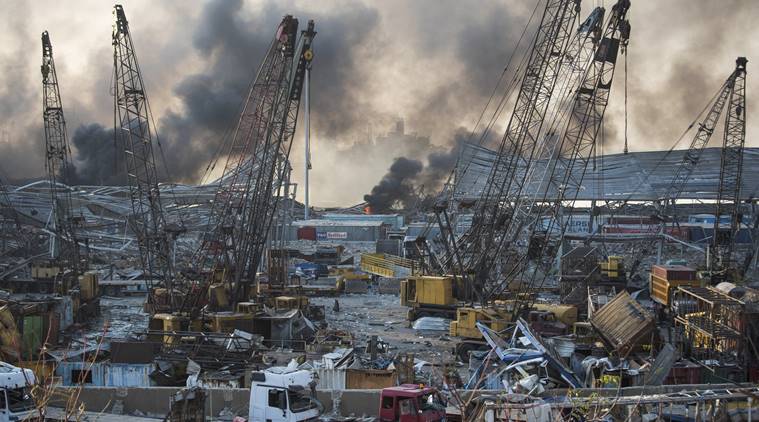 Lebanon’s cabinet ordered, on Wednesday, that all officials with links to the Beirut port are to be placed under house arrest, according to the Lebanese satellite channel, LBC.

The arrests will be supervised by army personnel, until those responsible for the explosion are identified.

“The house arrests will be imposed for everyone who managed the storage process, guarding, and work on the file, until 4 August 2020,” said Minister of the Displaced Ghada Chreim. “The house arrest is a travel ban, and the practice of any kind of arrest outside the prison until the conviction is proven.”

She added that a number of officials will be asked to stay at home, and will be prevented from carrying out their duties, until the five day Special Investigation Committee investigations are completed.

The Lebanese cabinet has also declared a nationwide State of Emergency for two weeks.

Lebanon’s Minister of Interior Mohammad Fahmi said that those responsible for the explosion will be held accountable, and that the investigation will be transparent.

“We do not need the participation of an international team to investigate the Beirut explosion as our investigators are competent,” the minister said.

It was not declared how many officials will be held under house arrest, nor their position, but Chreim said that the country’s army will decide the officials to be arrested.

Earlier on Wednesday, the country’s Public Prosecutor Ghassan Aouidat instructed the Internal Security Forces to immediately conduct the necessary investigations. This would determine the details and circumstances related to the devastating explosion at the port, particularly as it caused a large numbers of deaths and injuries and severe damage.

The death toll from the explosion has now reached 135, and about 5,000 have been wounded, according to Lebanon’s Ministry of Health.

Hassan Koraytem, Director General of the Beirut Port, said on Wednesday that 2,750 tonnes of ammonium nitrate had been stored, by court order, at a warehouse in the port six years ago. It is believed that the chemical is the cause of the powerful explosion that rocked the Lebanese capital.

Local media reports quoted Koraytem as saying that customs and state security asked the authorities to export or remove these materials, but “nothing happened.”

Lebanon’s main grain silo at the port was destroyed in the blast, along with the wheat inside, leaving the nation with less than a month’s reserves of the grain, Minister of Economy and Trade Raoul Nehme said on Wednesday. Other vessels with supplies are on their way, Nehme added.

Talking to Reuters a day after Tuesday’s devastating blast, Nehme said that Lebanon needed at least three months of reserves to ensure food security. He said reserves now stood at “a bit less than a month” following the blast, although other storage areas are now being looked at.

Without a hashtag: More forgotten journalists behind bars