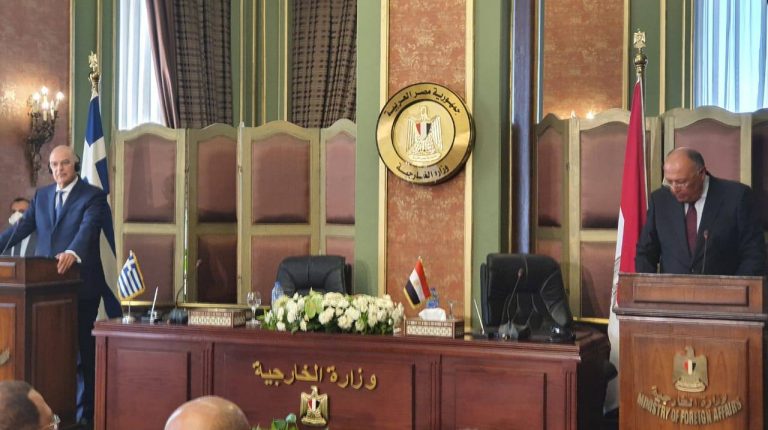 Egypt and Greece signed, on Thursday, a maritime demarcation deal, in a move to maximize their use of mineral resources in the Eastern Mediterranean region.

The agreement lays out the boundaries between the two countries’ exclusive economic zones, amid growing tensions in the Eastern Mediterranean, due to the illegal Turkish attempts to explore for oil in the region.

During the meeting, the two ministers also tackled the developments of the Libya crisis and the Eastern Mediterranean region.

Later in a press conference, Shoukry said that the agreement “allows Egypt and Greece to move forward in maximising the utilisation of the wealth available in each other’s exclusive economic zone, especially promising oil and gas reserves.”

According to Shoukry, “The agreement opens new horizons for more regional cooperation in the energy field in light of the two countries’ membership in the Eastern Mediterranean Gas Forum.”

He added, “The relationship between Egypt and Greece was a major factor in maintaining security and stability in the Eastern Mediterranean, and facing irresponsible policies to support terrorism, in addition to deviating from the foundations of international law.”

For his part, Dundas said, “The maritime demarcation agreement signed with Egypt came after long negotiations, and confirms the extent of the two countries’ cooperation.”

He explained that the Egyptian-Greek agreement came in accordance with the law of the sea, asserting that Greece will cooperate with Egypt to compact any challenges in the Eastern Mediterranean region.

He added that the agreement signed last year between Turkey and Libya’s Government of National Accord (GNA) to demarcate their maritime borders “was illegal.”