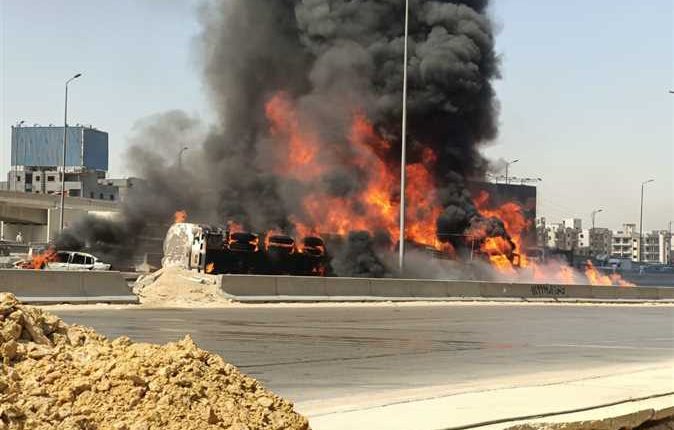 Eight people were injured and seven vehicles severely damaged in a traffic collision on Saturday, which took place on Cairo’s Ring Road, according to the Ministry of Health and the General Directorate of Traffic.

No deaths were reported in the accident, which occurred in the Fifth Settlement-Mounib direction, the ministry said, adding that the injured were transferred to Al Bank Al Ahly Hospital.

Eight ambulances were dispatched to the scene, the ministry added. The injuries varied from fractures, bruises, abrasions, and burns.

Local media quoted a security source as saying that five people were wounded in the accident. The source also noted that the accident led to a truck carrying petroleum products rolling over, following which a fire erupted that burned the truck and other vehicles on the road

Video footage shared on social media showed a fire and heavy smoke, which the Civil Protection Authority put out. Meanwhile, the Public Prosecution has initiated an investigation into the causes of the accident.

Earlier in July, 17 people were injured after a major fire broke out at a mazut pipeline on the Cairo-Ismailia road. Investigations showed that 37 vehicle and three motorcycles were damaged in the incident.

The main cause of road accidents was human error, accounting for 79.7%, followed by technical defects in the vehicles accounting for 13.5%, the report continued.

Meanwhile, the World Health Organization (WHO) said, “Egypt has a road traffic fatality rate of 42 deaths per 100,000 of the population. Most of victims (48%) are passengers in four-wheelers, though pedestrians also constitute a significant proportion (20%) of these fatalities.”