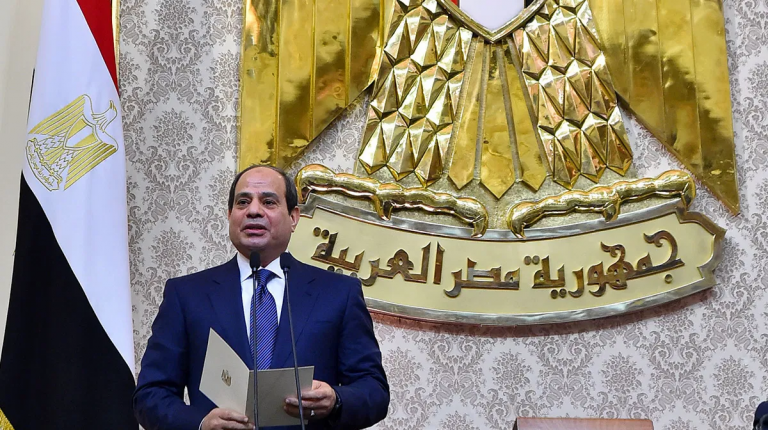 Egypt’s President Abdel Fattah Al-Sisi urged “Lebanese patriots,” regardless of their political differences, to cooperate and distance their country from any regional tensions and conflicts.

He also called on Lebanon to focus efforts on enhancing its institutions to meet the aspirations of the Lebanese people. Al-Sisi’s remarks came during a virtual donors’ conference, co-hosted in conjunction with the UN, on Sunday, to solicit international aid for Lebanon.

Moreover, French President Emmanuel Macron asserted, on Sunday, that Lebanon’s future is at stake, and that “we must all work together to ensure that neither violence nor chaos prevails.”

President Macron’s comments came as part of his participation at the donors’ conference.

The event was held to help those severely affected by the huge explosion that took place in the port of Lebanon’s capital Beirut, last Tuesday, which killed over 158 people, and left a quarter of a million homeless.

During his opening remarks, Macron called on the Lebanese government to act responsibly to safeguard the country’s future.

“We must act quickly and efficiently so that this aid goes directly to where it is needed,” he added,” the French president said. “It is up to the authorities of the country to act so that the country does not sink, and to respond to the aspirations that the Lebanese people are expressing right now, legitimately, in the streets of Beirut.”

According to media reports, the European Union (EU), the UK, China, Russia, Jordan and Egypt have sent representatives to the conference, besides, those from several GCC states including Saudi Arabia, Qatar and the UAE.

US President Donald Trump, confirming his attendance at the conference, tweeted that “Everyone wants to help!”

Although the former has offered aid to Lebanon in the aftermath of the explosion, Israel and Iran did not take part in the conference.

Earlier on Sunday, Lebanon’s Minister of Information Manal Abdel Samad submitted her resignation from her government position. Abdel Samad cited the failure of the government to carry out reforms and the catastrophic blast that hit Beirut on Tuesday, according to Lebanon’s Al Jadeed TV.

“I apologise to the Lebanese because we could not meet their demands,” she said, “Since a change in Lebanon remains elusive and the reality does not match our ambitions, and after the horrible explosions that hit the city, I resign from the government.”

Abdel Samad and Kattar are the first resignations by two government ministers since the massive explosion at Beirut port.

Also on Sunday, a statement by the Lebanese Presidency’s Information Office asserted that any demands for an international investigation into the Beirut port blast will only waste time.

The statement added that at this time, the country’s investigative authorities must quickly uncover the circumstances of the incident, and apply prompt justice.

The explosion had prompted violent mass protests which took place in Beirut’s streets on Saturday night. More than 200 people have been injured in the protests, including 63 who were transferred to hospitals, the Lebanese Red Cross reported. The Lebanese army was deployed on the streets of Beirut after the demonstrations were renewed on Sunday.

The blast at the Beirut port, blamed on a vast amount of improperly stored ammonium nitrate that was allowed to rot for years in a warehouse, destroyed entire neighbourhoods.

The UN has estimated the value of support needed in Lebanon’s health sector alone stands at about $85m.