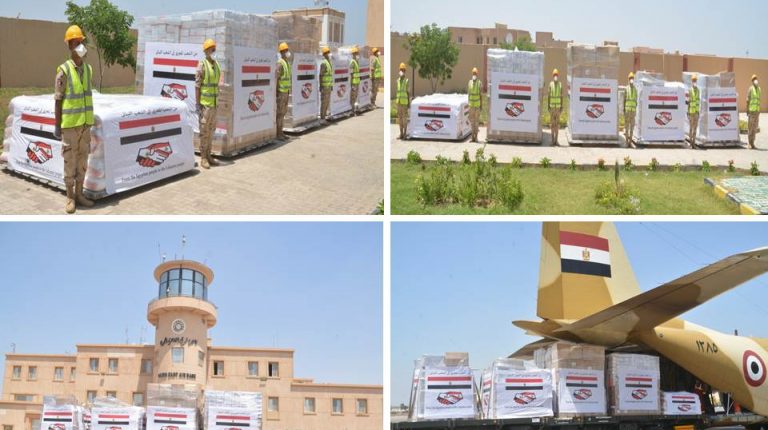 Egypt sent, on Monday, the third shipment of urgent medical, relief supplies to the Lebanese capital, Beirut, according to an Egyptian army statement.

The third aid batch compromises 14 tonnes of medical supplies, and foodstuff including flour to maintain bread production in the city and to compensate the damage occurred to the country’s strategic reserve of wheat, the Egyptian Embassy to Beirut revealed.

Meanwhile, Khaled Megahed, Spokesperson for Egypt’s Health Ministry, said, in televised remarks on Sunday, that they are ready to provide Lebanon’s hospitals with all needed medical supplies.

Since the deadly blast rocked the Lebanese capital almost a week ago, Egypt set up an air bridge operation to provide humanitarian assistance to the Lebanese people. It also sent several medical teams to assist in providing medical aid at Egypt’s field hospital in Beirut.

The first Egyptian aircraft arrived at Beirut Airport last Thursday, while second one arrived on Saturday.

The assistance comes upon Egyptian President Abdel Fattah Al-Sisi’s directives to support the Lebanese people following the deadly blast which has killed 160 and injured 6,000, according to the latest figures from Lebanon’s Ministry of Health.

The Lebanese government said that 2,750 tonnes of ammonium nitrate that had been improperly stored at the port for six years caused the huge blast.

The devastating blast has come amid a political and economic crisis in Lebanon. It has sparked angry protests earlier this week against the government, over accusations of corruption, negligence, and mismanagement.