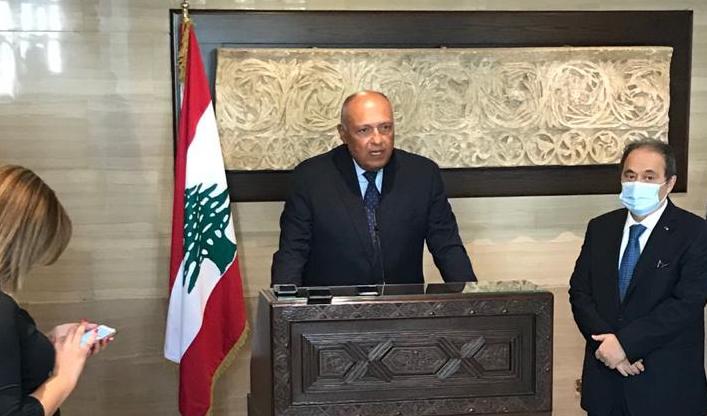 During his solidarity visit to Beirut, Shoukry asserted that Egypt would set up an air bridge for relief and humanitarian aid, and a sea bridge for reconstruction. He added that Egypt is intensifying its efforts to stand by the people of Lebanon during their crisis.

Shoukry was received by Lebanese President Michel Aoun at the Baabda Palace in Beirut.

“We have a directive to work closely, through Egyptian government agencies, to meet the needs and priorities of Lebanon as quickly as possible,” Shoukry stressed.

During his visit, Shoukry also inspected the Egyptian Field Hospital in Lebanon, which accepted the wounded in the huge explosion at the Beirut port. He hailed the important role played by the hospital, and the high-quality of free treatment services it is providing. The six-clinic facility has opened its doors to victims only one hour after the explosion took place.

Moreover, Egypt sent, on Monday, the third shipment of urgent medical and relief supplies to the Lebanese capital, according to an Egyptian army statement.

On Tuesday, Jordan’s Minister of Foreign Affairs, Ayman Safadi, visited Beirut to reaffirm Jordan’s solidarity with Lebanon and coordinate aid efforts. Safadi said that the Jordanian field hospital will remain as long as it is needed, and that his country will send relief supplies to Beirut, the first of which will arrive next Thursday. He stressed that Lebanon will not be alone in facing the repercussions of the explosion.

Meanwhile, Lebanon’s General Directorate of State Security said in a statement, on Tuesday, that it had discovered security flaws in Beirut port that led to the explosion last week.

The State Security mission started working in the port on April 2019, with its main goal to fight corruption. During its work in the port, the mission found that there were security flaws at the port, the document added.

A later judicial investigation was launched in January 2020, which concluded that the industrial chemicals stored at the port needed to be secured immediately.

The statement added, “At the end of the investigation, Prosecutor General Ghassan Oweidat prepared a final report which was sent to the authorities.” This refers to a letter sent, by the General Directorate of State Security which oversees port security, to both Diab and Aoun on 20 July.

The devastating situation sparked mass violent protests in Beirut’s streets, which saw over 200 people injured, of which 63 were transferred to hospitals, according to the Lebanese Red Cross.

More protests occurred on Tuesday, one day following the resignation of Lebanon’s government. The renewed protests are calling on President Aoun to resign too.

The UN has announced that the World Food Programme (WFP) will send 50,000 tonnes of wheat flour to Lebanon, in order to stabilise the country’s wheat supply. The move comes following the complete destruction of the country’s main wheat silo, which was based at Beirut’s port.

According to a report by the UN, the flour will be sent “to stabilise the national supply and ensure there is no food shortage in the country.” It added that about 17,500 tonnes of wheat flour will arrive in Beirut in the upcoming 10 days, supplying bakeries for a month.