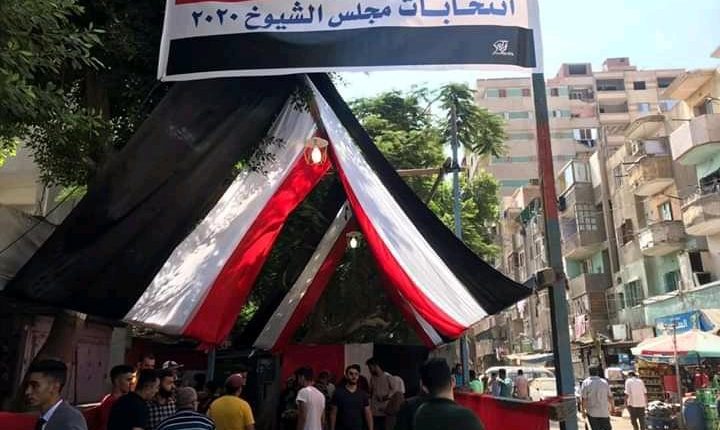 Medium turnout was recorded in the working-class Cairo district of Ain Shams during the second day of Senate elections, with elderly people and young campaigners dominating the scene outside polling stations.

Near a polling station in Manshyet Al-Tahrir street, a heated verbal argument took place at a café between election boycotters and campaigners who work as coordinators with the Mostaqbal Watan Party. The party is expected to secure the majority, after reaping 40% of votes in the parliament following five years of lobbying and alliance-forming.

Saeed, an elderly resident of Ain Shams who formerly worked as a driver with the Ministry of Endowments, countered the arguments made by the young coordinators. He said, “Legislative bodies should be monitoring the state’s and the government’s actions.”

He asked why they participated in a race whose outcome is already known, hinting to the parliament’s uncritical stance of the government.

Saeed argues that all members of parliament (MPs) that he took part in electing since he was a teenager have promised to solve the problems voiced by voters, but in vain. According to the retired driver, from 1980 onward, he has voted for the Wafd Party, the National Democratic Party (NDP), several leftist parties, the now outlawed Muslim Brotherhood-affiliated Freedom and Justice Party, and the Mostaqbal Watan Party in 2016 elections.

“All of them promised to clean the streets, confront drug dealers, take care of the damaged roads, and develop the basic infrastructure,” he added as he turns the campaigner away, before turning back to his shisha.

The 21-year-old campaigner Mohamed Osman said he volunteered to invite people to cast their vote and choose whoever represents them.

“We have to understand that the Senate is a crucial step towards having a democratic environment,” he added.

As the argument between Saeed and Osman escalated to the point of a fist-fight, Mossab, a 28-year-old school teacher, told Daily News Egypt that he will not vote as he has “lost trust in the politicians and their affiliated bodies.”

He added that he was a campaigner for a political party in the 2016 elections, and invited his friends and neighbours to vote. The candidate for whom he campaigned has secured a place in the parliament.

“Currently this MP never answers his phone and does not meet with the residents of the area who elected him,” he said. “We only see him from the glass of the posh car he now owns.”

In a matter of minutes, police officers who happened to be securing a nearby polling station intervened and ended the dispute between the optimistic campaigner and the pessimistic old timer.

A closer look at Ain Shams

The political turmoil of 2011 and 2013 has seen an increasing divide between the rich and poor in Egypt, as well as a worsening of public services provided to citizens. Throughout the years, the demography of the Ain Shams has started to change, with more and more middle-class families moving into the area.

The worsening of public services can be seen in the monitoring of building violations. Dozens of old houses, several of which built in 1940s and 1960s were torn down, with 12-floor buildings were constructed instead. Not only has this meant the market price of real state in the neighbourhood has sky-rocketed, despite the deteriorating roads and infrastructure.

Despite having consumer hotspots that include fast food chains, well established medical centres, banks, stores, universities and schools, the neighbourhood’s infrastructure has witnessed severe deterioration in the past few years. This extends over its sewer system,  garbage collection, and bumpy roads, to name just a few.

In a nearby street, the Manshyet Al-Tahrir Youth Center was turned into a polling station, outside of which heavily armoured police and army forces secured the area. Several citizens cheered and waved the Egyptian flag, as nationalist songs played in the background. This is a common feature in Egypt’s electoral politics, where state supporters gather in front of polling stations to demonstrate their appreciation for the police, army, and the country’s various ministries.

When the waiting queue outside the polling station extended to the entrance, police personnel intervened to enforce social distancing.

Inside the polling station, the adherence to wearing face masks varied, with the majority only wear them if young volunteers wearing white t-shirts with the logo ‘Long Live Egypt’ handed some. Other elections employees were wearing face masks, but did not cover their noses.

A total of 63 million Egyptians were eligible to cast their ballots in the elections, with the electoral process supervised by about 18,000 judges and 120,000 employees present at polling stations.

An elderly lady, who had come to vote, told Daily News Egypt she went to the ballot to “secure a future for her children and grandchildren.”

She expressed hopes that the new Senate and its elected members might help her children find jobs and secure a living in order to get married. The woman, who called herself Um Ahmed, added that she wished for the newly elected officials to give due care the problem of littering and to fix the roads.

In the same polling station, Saber, a young student of Islamic jurisprudence at Al-Azhar University, said that he is convinced of the necessity of elections.

“It is important for people to participate, even if they annul their votes, as this is their constitutional right, and the Senate relates to a range of responsibilities rather than just local affairs,” he said, as he sanitised his hands. “It will touch upon politics, taxes, and foreign affairs, all of which will eventually affect the citizen.”

When asked about the absence of Islamic political parties, Saber noted, “These parties had their chance to present their programmes to the people for three full years, but were not able to secure this popularity when they handled politics.”

Once a stronghold of Islamist parties and groups, Ain Shams witnessed almost weekly protests by supporters of the Muslim Brotherhood. The protests saw casualties from both security personnel and protestors.

In the 2020 Senate elections, the only entity to represent the Islamist political segment is the Al-Nour Party with no more than 20 candidates across the country.

In a polling station held at the Al-Khansa’a School, several elderly voters arrived, but stayed outside as campaigners held a shady spot under which voters could rest. A judge overseeing the electoral process at the school told Daily News Egypt that most voters were well informed of the voting system, and almost all of them knew which candidates they wanted to choose.

The judge, who spoke on condition of anonymity, added, “Violations are rare, although there has been an incident where a candidate was distributing flyers near the polling station and he was ordered to step away.”

Nevertheless, in other cases some campaigners were close to the polling station and mingled with the voters, and even volunteered to assist the voters in casting votes.

At the same school, middle-aged schoolteacher Fawzia  took a break from work to come and cast her vote. As a nationalist, Fawzia said, “Today’s vote is a response to whoever says Egypt is not a democratic country which has separate and independent institutions.”

She added that she did not know the programme of the Nation’s Future Party, for whom she voted. She has, she added, been following the news and that she knew they were a strong supporter of President Abdel Fattah Al-Sisi.

“They are men who can be trusted like the police and army,” Fawzia noted.

Indeed, since its formation in 2014, the Mostaqbal Watan Party has been a strong supporter to the government and the president, as well a vocal critic of the now banned Muslim Brotherhood. The party holds activities, charity events, and popular conferences on a weekly basis, events which are heavily reported by the Egyptian press.

In an interview with Daily News Egypt, Ashraf Rashad, Deputy Head of the party, said that they “are a party for everyone who knows and appreciates the value of his homeland.”

He also added that they see it as an honour to “back the state. Our role is to support the Egyptian state and our goal is to preserve the nation’s interests.”