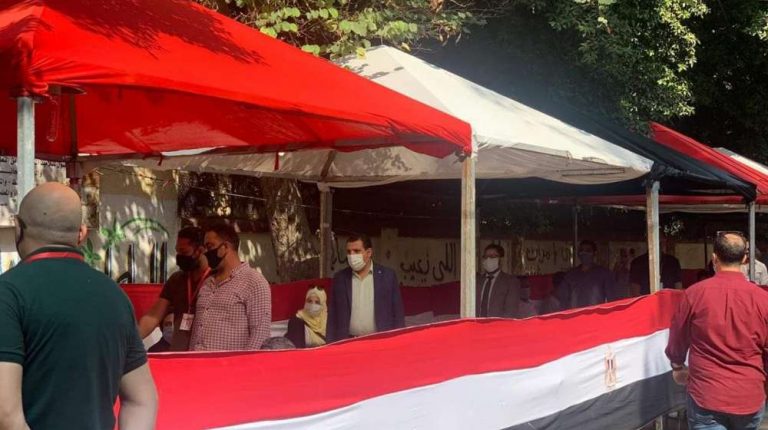 Small queues formed outside polling stations in some parts of Egypt’s capital Cairo, on Wednesday, as voting reopened at 9:00 in the second day of Senate elections.

Egyptians headed to cast their votes at polling stations for the country’s newly established second legislative chamber, as party representatives flooded the streets with banners. Precautionary measures have been tightly enforced during voting as part of efforts to curb the novel coronavirus (COVID-19).

The two days of voting commenced nationwide on Tuesday at 11,500 polling stations across the country, with Wednesday being the second and final day.

“I came to vote because I am afraid of the prospect of Islamists sneaking back into senate,” a woman in her mid-forties told Daily News Egypt during voting in the Cairo suburb of Maadi, “I want to ensure that the Salafist Al–Nour Party will not get a seat.”.

Voters will be able to go to ballot stations between 9:00 and 21:00 local time, with the results of the election to be announced on Wednesday 19 August.

In case a run-off election round is held, a second-round of elections will be held on 6 and 7 September for expatriate Egyptians, and on 8 and 9 September for Egyptians inside the country. The results for this will be announced no later than 16 September.

About 63 million Egyptians are eligible to vote in the Senate elections, with the polls supervised by 20,500 judges, and 163 media organisations. A total of 13 foreign and Egyptian civil society organisations are also monitoring the voting process.

The elections are Egypt’s first for a second chamber since the dissolution of the Shura Council in 2013, with the Senate’s work in conjunction with that of the parliament. The Senate’s return comes following amendments to the Constitution in 2019.

US Congress makes $1.3bn in military aid available in 2014

Makhyoun: “We will ally with parties of Islamic persuasion, but not the FJP”